On 13 April 2016, Bulgarian cartoonist Tchavdar Nikolov published animated cartoons in video format on the VBOX7 platform of NOVA TV, one of the largest private television channels in Bulgaria.

The company removed this animation, also removed an interview with Nikolov and the rest of his work from the website, some 90 animations, and terminated the contract with the author.

This is the sequence.(See animation)

The first vignette depicts the establishment of the Bulgarian state in 681 AD under the proto-Bulgarian horsetail flag upon its arrival in southeastern Europe.

In the second, Bulgarian Prime Minister Boyko Borisov, a former karateka and former bodyguard, is shown in 2016 holding a flag with a plastic loop or bridle (colloquially translated in Bulgarian as“pig tails“) used for handcuffing detainees.

This critical animation alluded to the migrant-hunting brigades acting as ‘citizen police’ at the border arresting Afghans who had entered Bulgaria. A video released this week showed how, after handcuffing them, they were threatened and ordered to return to Turkey.

Prime Minister Boyko Borisov asked the media not to use the term “pig’s tail”. In his view it implied a negative connotation considering that:

“…they are Muslims and do not eat pork”.

A hypocritical statement, because before that, Borisov, publicly supported the actions of these volunteer paramilitary squads of migrant-hunting volunteers, saying that:

“…any help to the border police is welcome”.

A Facebook rally to protest against censorship and the dismissal of cartoonist Tchavdar Nikolov took place in the capital Sofia on 15 April, attended by artists and journalists. 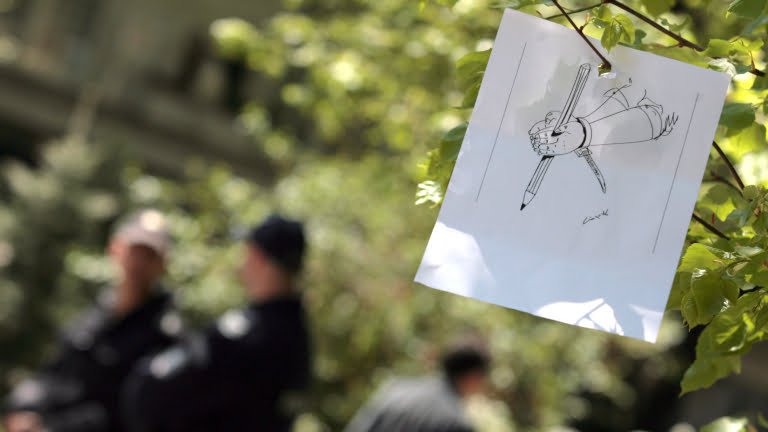 The story has an unusual ending, this time for the better.

The mobilisation, the various protests and their media coverage provoked a remarkable social reaction of support for Tchavdar. This forced a public apology from Frenchman Didier Stoessel, CEO of Nova Broadcasting Group.

The company republished all of the cartoonist’s work on the vbox7 platform and offered him a new contract.

The one who did not fare so well was Prime Minister Boyko Borisov, who was portrayed by Nikolov.