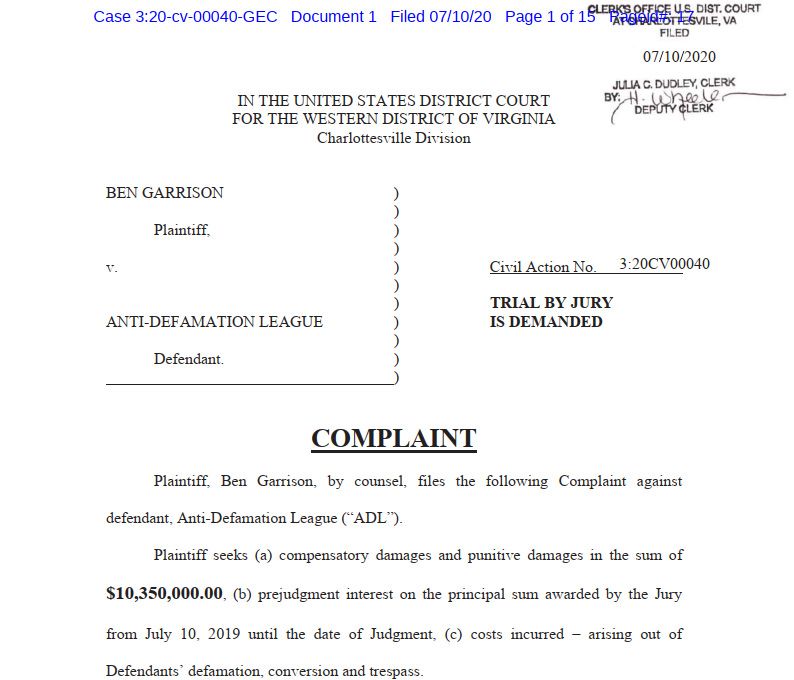 It sounds like a joke, but it is. Normally it is the cartoonists who receive the complaints, in this case it is the other way around. The cartoonist has sued the Anti-Defamation League (ADL) and is asking the organisation to compensate him with an amount of more than 10 million dollars for accusations of anti-Semitism.

ADL is a more than well-known jewish organisation founded in 1913 who presents himself as “a leading anti-hate organisation and in response to a growing climate of anti-Semitism and bigotry, its timeless mission is to protect the Jewish people and ensure justice and fair treatment for all”.

At the root of the lawsuit are statements in various opinions such as those in an ADL article entitled “The ADL’s mission is to protect Jewish people and ensure justice and fair treatment for allAnti-Semitism Used in Attack Against National Security Adviser H. R. McMaster“ which was published on 3 August 2017 on the ADL website. 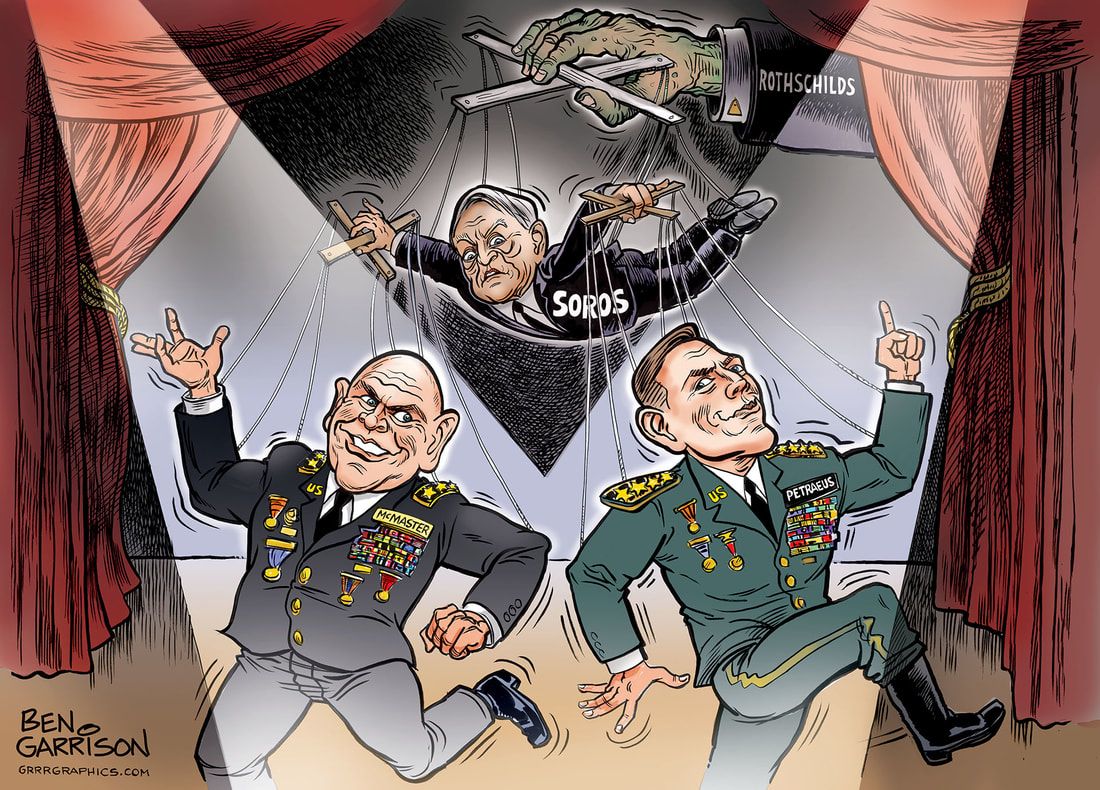 Cartoon discussed in the ADL article “Soros Puppets”, published on the author’s website in 2017. Under the image, the author admits that it was commissioned by Mike Cernovich, but Garrison has always denied that there was an anti-Semitic message in his criticism of David Petraeus and H.R. McMaster, Soros and the Rothschilds.

“Commissioned Cartoon for Mike Cernovich It is not anti-semitic to criticise Soros or the Rothschilds”.

ADL’s text and reason for the lawsuit notes that: “Prominent Alt-Right blogger and radio host Mike Cernovich allegedly commissioned a blatantly anti-Semitic cartoon for use as part of his campaign against McMaster “. (National Security Advisor under Donald Trump until 2018)

They add: “The cartoon’s message is clear: McMaster is simply a puppet of a Jewish cabal.” “Ironically, Garrison has often complained that some of his cartoons were being manipulated on the internet into anti-Semitic messages. In this case, however, he displayed a blatantly anti-Semitic cartoon on his own website”. “It is impossible to miss the anti-Semitic focus of Garrison’s cartoon”

Ben Garrison: “I fought the trolls for many years and lost”
Ben Garrison is one of the American cartoonists who stirs up most passions and fights between those who defend his ideas and those who are dedicated to bashing him. It is also said that he is the most trolled cartoonist on the internet and many of his cartoons have been manipulated to “adapt” his messages.

Garrison insists that the ADL knew that his cartoon of Trump’s former George Soros-controlled national security adviser H.R. McMaster was based on fact.

The lawsuit is not only based on this article, it also adds other links where the ADL is deemed to have singled out Garrison as an anti-Semite.

Garrison believes he should be compensated and is not asking for a fistful of dollars, he is asking high and mighty:

-Compensatory damages in the amount of $10 million or the greater amount determined by the jury.

-Punitive damages in the amount of $350,000 or the maximum amount allowed by law.

– Pre-judgment interest from July 10, 2019 to the date of entry of judgment at the maximum rate allowed by law.

-Post-judgment interest at the maximum rate allowed by law.

-Costs and such other and further relief as may be just and proper.

Lawsuits aside, Ben Garrison’s, in addition to his continued sleazy sniggering at Donald Trump and his political position, is beyond ridiculous

Hehas longbeen drawn as a kind of Robert Redford. He represents always young and handsome, muscular, powerful and triumphant, like a superhero. He has no qualms about going to great lengths to pull off an idealised and more than generous anatomy to show that his relationship with Donald is, at the very least, platonic love. 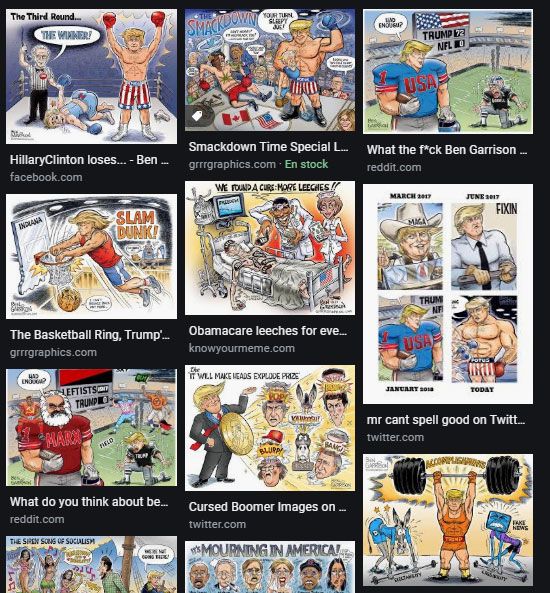 This mamporrerismo has even led other authors to make fun of Garrison and to use him as an example of what political graphic humour should not be. Perhaps he will go down in history, but as an example of the antithesis of the cartoonist 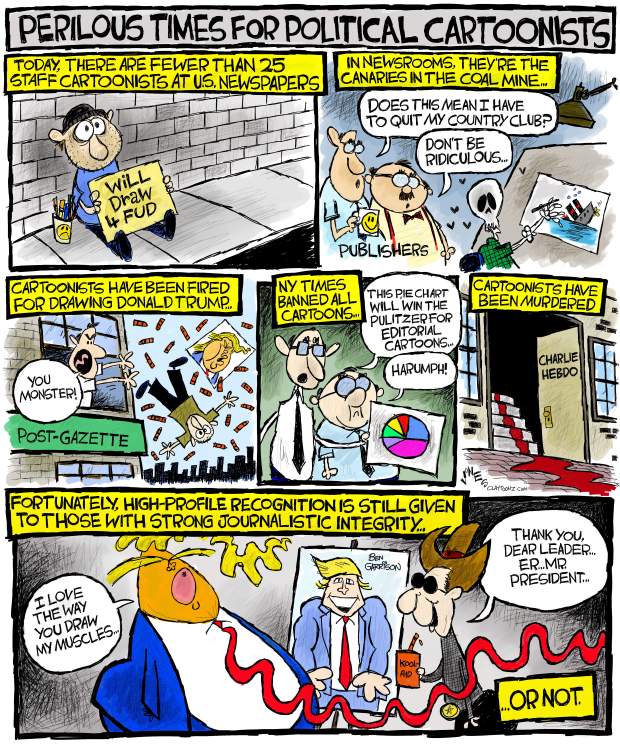