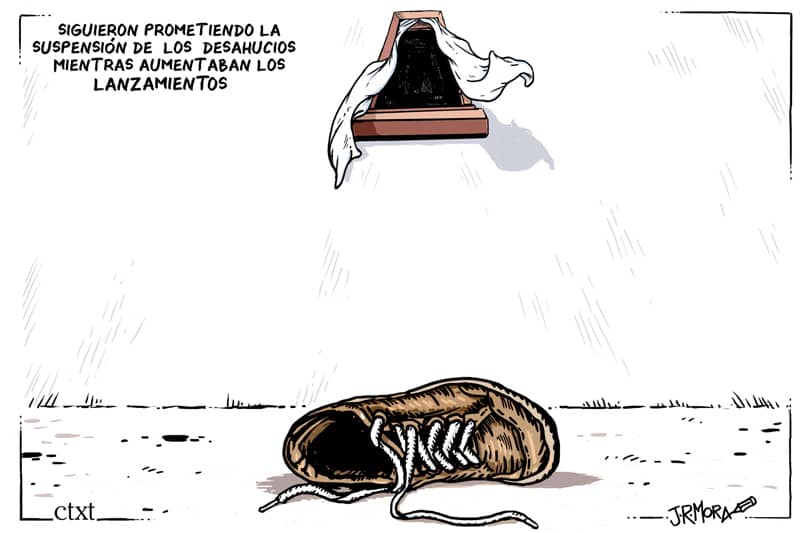 I’m naive, I still believe we have a memory for the important things.

Last week two people committed suicide when they were about to be evicted from their respective homes in Barcelona y Fuerteventura.

Today, the lukewarm reaction to this type of events contrasts with the clamour of the social response during the hardest times of evictions, even more so when some people are still convinced that the  government has prohibited them.

However, according to data from the INE, foreclosures on primary residences increased by 84.1% in the first quarter at a year-on-year rate and reached 3,207, the highest figure since the first quarter of 2017.

What previously would have meant large protest mobilisations has passed almost as just another minor new more.

The time to be indignant has been reduced to the duration of a few tweets.

The lamentations and false chest-beating will return, but that will be when we have finished attending to the carousel of bullshit and daily entertainment distractions that mark the agenda of “current affairs” which, of course, has no end.

No housing, no electricity, no full democracy

“It seems that the government is looking for a solution that does not upset the big beneficiaries of such injustices, namely the electricity companies and the funds, banks, companies and citizens who own the rented housing.”
“If the Executive does not show a minimum of political courage and does not fulfil its own electoral promises, how on earth do they expect people to vote for them again?”