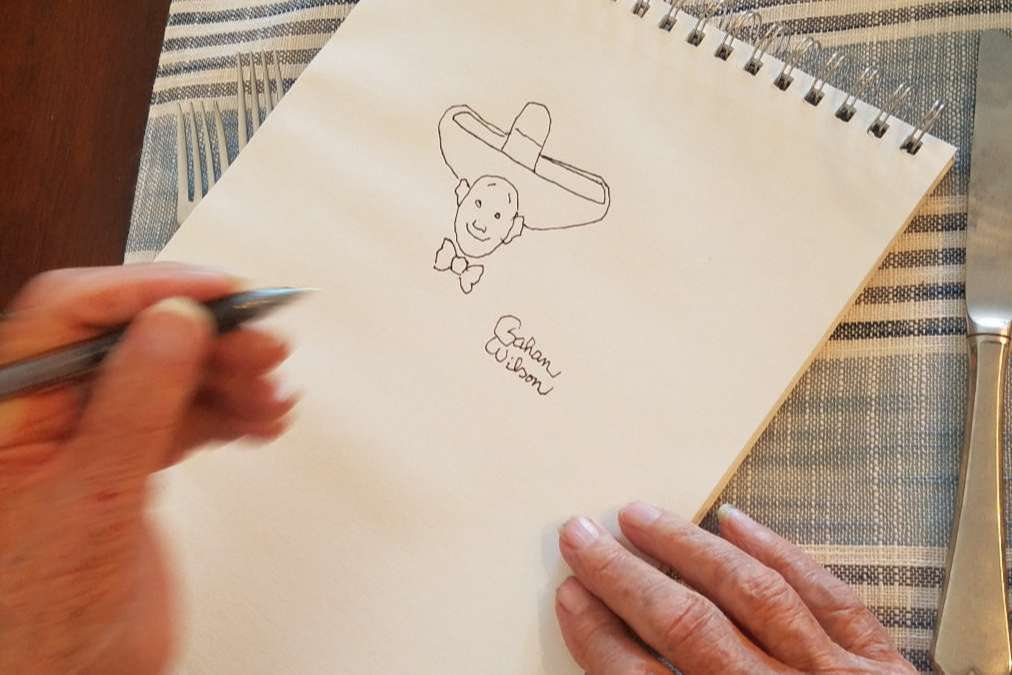 At the beginning of January this year Gahan Wilson announced that he was retiring, less than a month before his 89th birthday.

It is said that cartoonists never retire, but in Gahan’s case it was inevitable. He suffers from advanced dementia.

In March his wife, the writer Nancy Winters, née Nancy Dee Midyette, died. They were married in 1966. Gahan would confess shortly afterwards that her death had meant the loss of balance in his life. 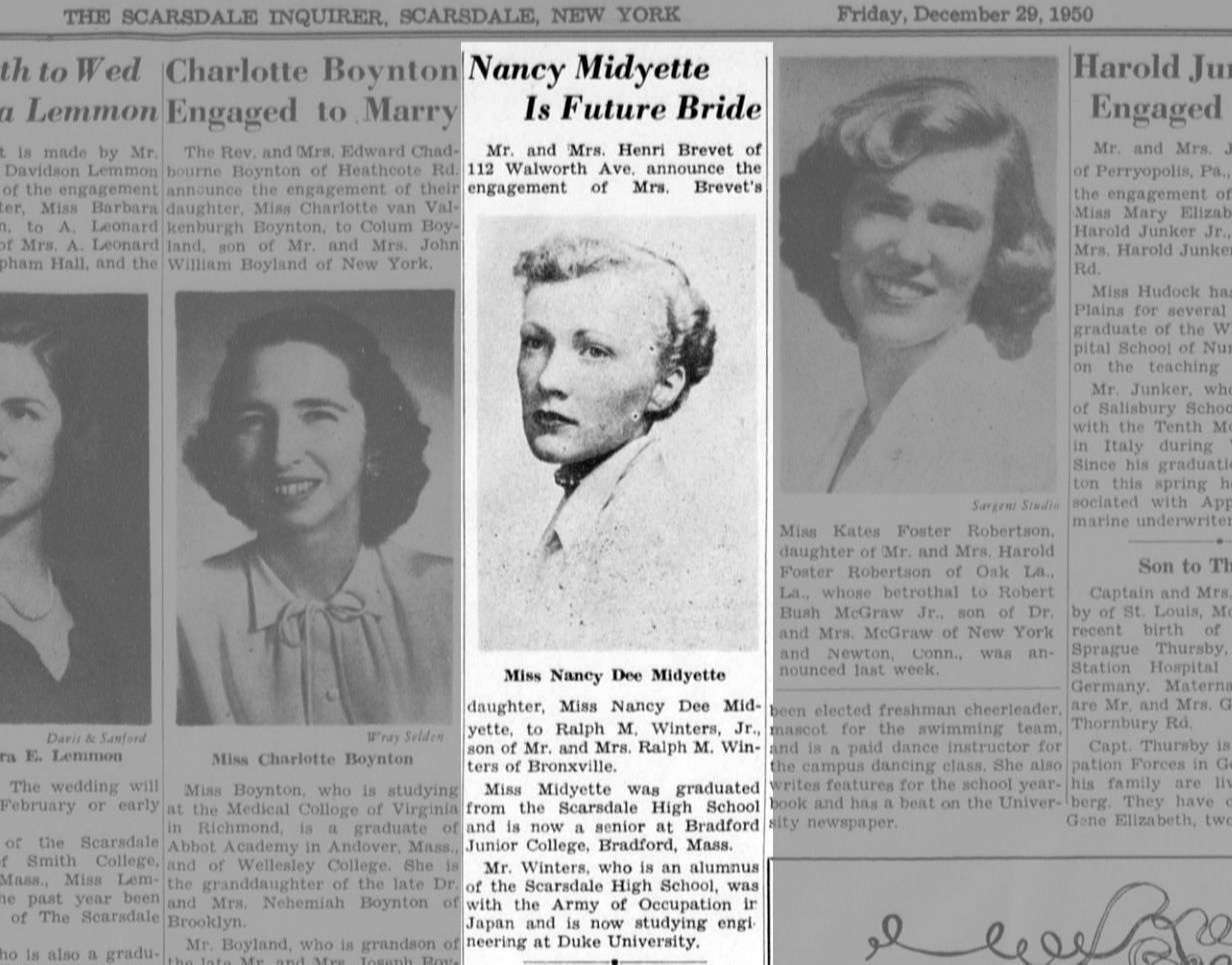 A traditional account of the time of Nancy’s engagement to her first husband, published in The Scardale Inquirer, No. 52, 29 December 1950 (1)

Help to get back on track

Nancy’s son Paul Winters, who was 10 years old when his mother and Gahan met, decided it was time to take care of his stepfather.

“Do you know who I am?” he asked Gahan a couple of years ago. He studied his stepson and replied,“No, but you look like someone who is important to me.” (2)

“That was a good enough answer,” Paul thought.

Gahan lives in a memory care centre not far from his home. The staff are friendly. Gahan is safe. But that’s no way to live, said Paul, who has opened a gofundme campaign fundraiser, which has already raised more than $81,000.

On Gofundme, in addition to many small donations, friends, readers and fans share photographs of books dedicated by Gahan and memories of their encounters with him.

“On the set of Night of the Living Dead in the early ’90s, with Gahan and director Tom Savini… I realised that Gahan Zombie looks *exactly* like one of his cartoons! : )” Wrote Craig Spector.

Gahan Willson above left, Tom Savini below and Craig Spector on the right

Steven Staszower shared a photograph of his youth posing with Gahan at an event in the late 1980s to which he adds:

“Gahan is a sweet guy and a legendary cartoonist! He was very kind to me when I met him in 1989, and I haven’t forgotten him.” 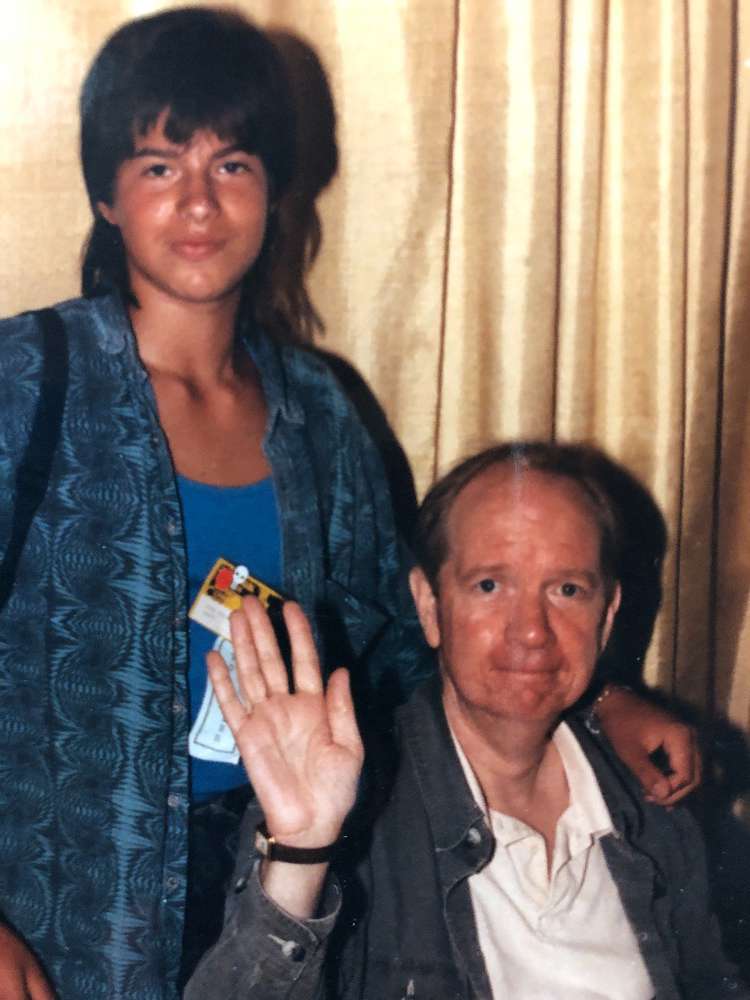 According to Gahan, when he was eight or nine years old, he was browsing through the book section of a thrift store and came across the bound volumes of Punch magazine. He bought one of them for fifteen cents and took it home. He would later beg his father insistently to take him back to that shop for more comics, his visits there being his first steps towards becoming a cartoonist.

An author known for his macabre and sometimes tender sense of humour. In 1957 he began working for Playboy where he would publish for 50 years. These works were collected and published in three volumes by Fantagraphics in 2009.

In 1980 he sold his first drawing to The New Yorker. Gahan said in 2011 that, from then on, he tried every week. He sent them ten to twelve submissions a week, sometimes more. He never knew in advance ifthey would buy any of them and then ask him to do them in colour.

As they did not pay more for colour, Gahan claimed to be somewhat annoyed by this relationship, which it is understood was not subject to any contract.

His work also appeared in Collier’s Weekly, The Magazine of Fantasy & Science Fiction and in National Lampoon where he published “Nuts “. 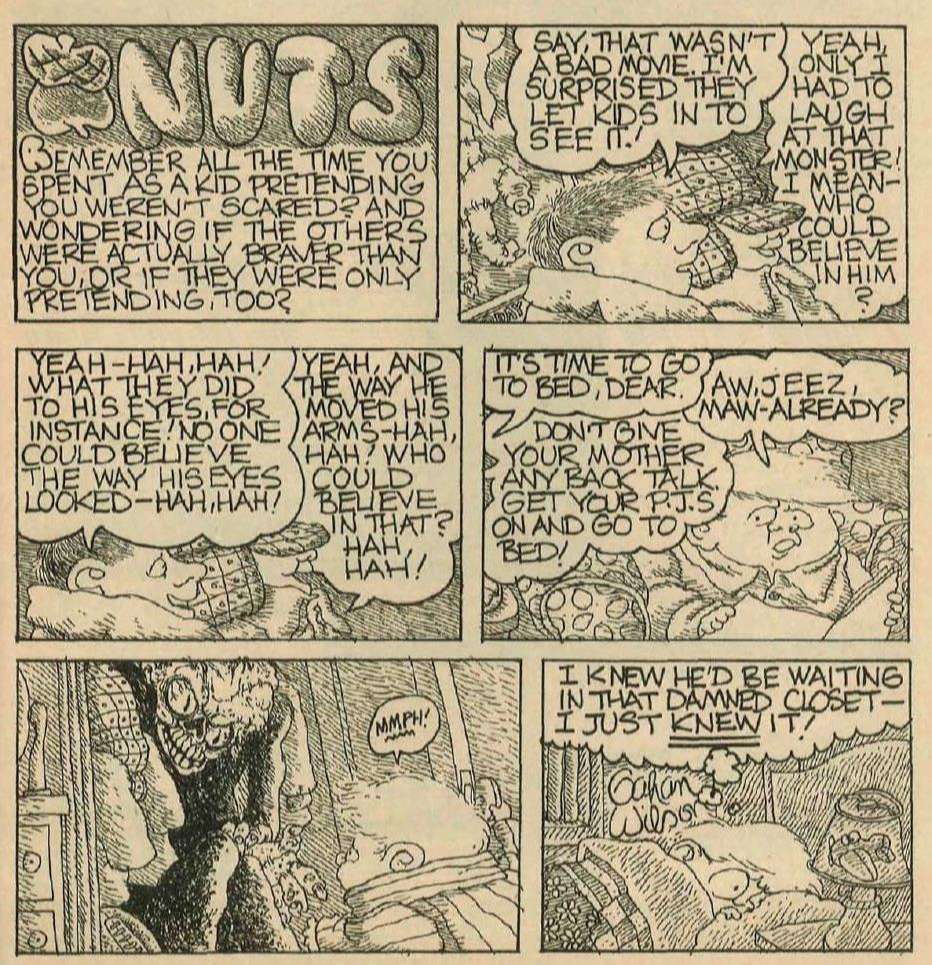 He worked as a film critic for The Twilight Zone Magazine. His style was often compared to that of Charles Samuel Addams “Chas”, the creator of the Addams Family, whom Gahan has on more than one occasion said he was influenced by.

He also created with Byron Preiss a popular computer game entitled Gahan Wilson’s The Ultimate Haunted House, which was marketed by Microsoft Home between 1993 and 1994 for MAC OS 7 and Windos 3.1

The objective of this fun adventure game, made entirely from his drawings, was to collect 13 keys in 13 hours from the 13 rooms of a haunted house. To achieve this, you had to interact in different ways with the objects, and with the house itself, using different characters such as a two-headed monster, a mad scientist and a vampire.

A perfect emulation can be played online at PlayClassic.

In 2013, his life and work was made into a documentary film entitled “Gahan Wilson: Born Dead, Still Weird“. On the origin of the title, an anecdote also recounted in the documentary, Gahan recounted the details in an interesting and lengthy interview (3 ) to The Comic Journal in 2011.

“I was born in Evanston, Illinois, on February 18, 1930. Charles Jaffe did a nice documentary about me called Born Dead, Still Weird, and I was actually born dead, which is a pretty extraordinary story. I was born blue and I wasn’t breathing, so they put me in the sink. Fortunately for me, the family doctor was there.

He was looking through the little porthole in the operating room door, burst into the room and grabbed me. He used hot and cold water and slap, slap, sl ap. He made me cough, vomit and breathe. And that was it: I was alive. I don’t know if anyone at the hospital ever apologised for it. “Oh, God, I’m sorry…” The same thing happened to John Steinbeck. He might have spent some time in the afterlife before he was born.”

In the same interview, as well as recalling his time at the various publications he worked for, his childhood and his memories of his parents, Gahan recalls one of the darkest passages of his life. The hell of alcoholism when he was in his thirties.

GEHR: You have described your childhood as “turbulent”.

WILSON: It was a bit difficult. My father was definitely an alcoholic and I’m a recovering alcoholic.

For a while it was manageable, but it started to go beyond manageable and became really horrible. This was decades ago. I was in control of it, more or less. I was doing exactly what my father did, who got drunk every damn night, pretty much.

GEHR: You were in your thirties?

WILSON: Yeah, something like that. I don’t remember the exact time. I can’t describe how depressing it was. I never got into drugs, thank God. I did a little cocaine and didn’t care for it. I smoked marijuana, which I didn’t like at all, except once. I never took LSD and so on. You go into this thing where, like in O’Neill’s plays, there’s a horrible desperation, and it’s horrible. I can’t describe it. It’s all useless, no good, a cesspit.

I started to get really fucked up. I had terrible problems, I was in complete despair. Then Nancy, bless her heart, did some research. She’s a very smart person. She did a good job of finding the best places to go to therapy so I could quit.

We made a list and did a little tour of these places. We ended up at a place called Silver Hills. It was a very moving experience, really. You know what these other people are going through and they know what you are going through.

But nobody else does; there ‘s no way they can do it. It’s like a group of people on a life raft or whatever cliché you want to use. I love these people. I keep in touch with many of them. For some it worked, for some it didn’t. Things in Alcoholics Anonymous are exactly the same: you have people who have been where you are.

That’s how you help each other. It’s very complicated, but it worked for me, praise be to God. I’ve never been tempted to drink again, although I miss the delicious taste of wine. It was delicious.

Now, as the campaign says , Gahan continues to be helped to find his way, not forgetting the humour that has been with him all his life and declaring himself happy to be alive. 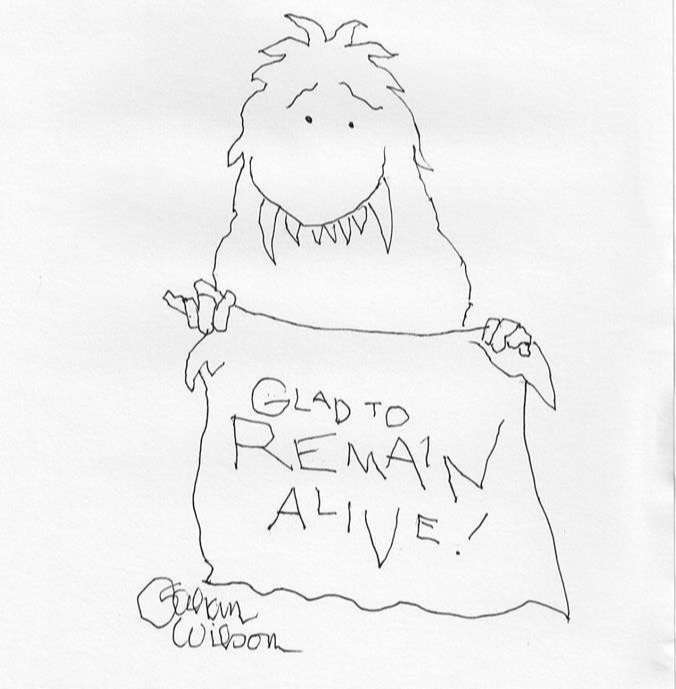 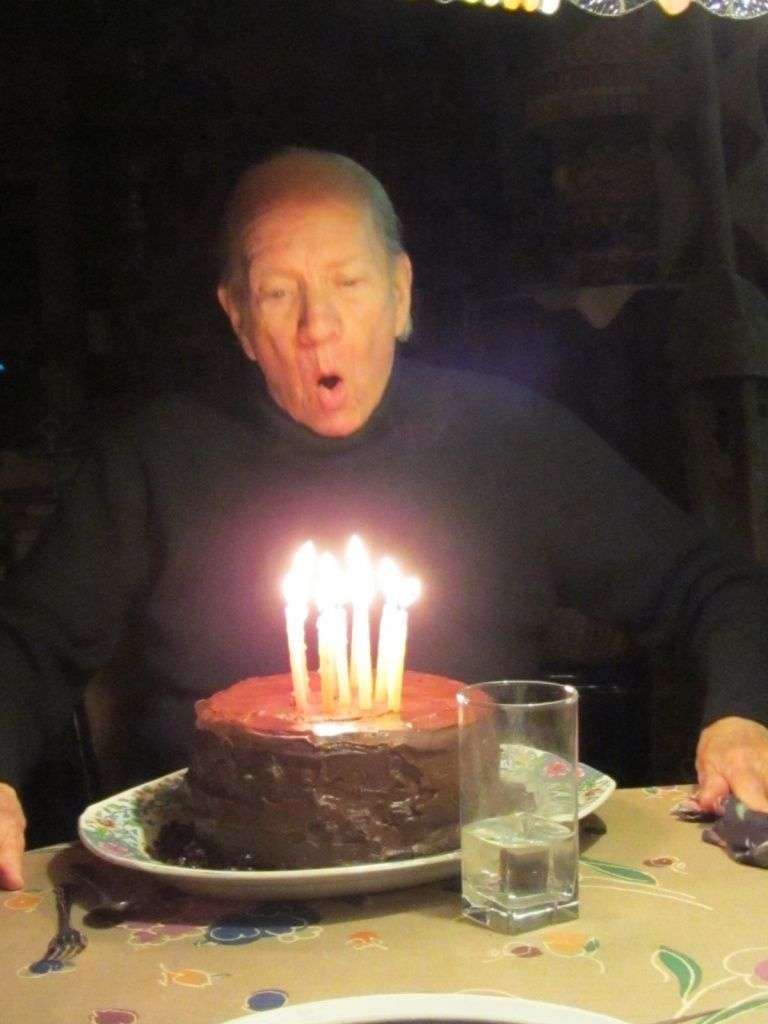 (2) He has dementia, but cartoonist Gahan Wilson still sees humour in the world azcentral