In June 2017, cartoonist Osmani Simanca was fired from the Brazilian newspaper A Tarde

The Cuban-born and naturalised Brazilian cartoonist had been working for the newspaper, the oldest in the state of Bahia and one of the oldest in Brazil, for more than 15 years. It has been in print since 1912.

According to the author, he was not fired for a specific cartoon but for his criticism of the government of Michel Temer and his allies. In other words, for all of his cartoons in 2016.

In a note on his Facebook page, he explained that after the penultimate change in the newspaper’s management, he began to be questioned about the content of his cartoons, some of which were censored, and he took the opportunity to recall some of the chronic illnesses of journalism.

“It is difficult to have freedom without economic independence. Most of the press has always depended on government propaganda. This would not be a problem if these rulers did not put pressure on newspapers and journalists, and if democratic journalists and newspapers did not allow themselves to be pressured to write unfair praise or criticism. Our course must always be defined by ethics and virtue, rare things in these dark times, full of hatred and intolerance.

Cartoon of 22-11-2016, rejected by the newspaper’s management, with caricatures (from left to right) of Romero Jucá, Michel Temer and Geddel Vieira.

These rejected cartoons were published at the time with considerable repercussions in other media, and he also pointed out that, for some time, the texts of his colleagues had been cut out, but never the cartoon. The cartoon remained“a small oasis in a desert of scissors“. 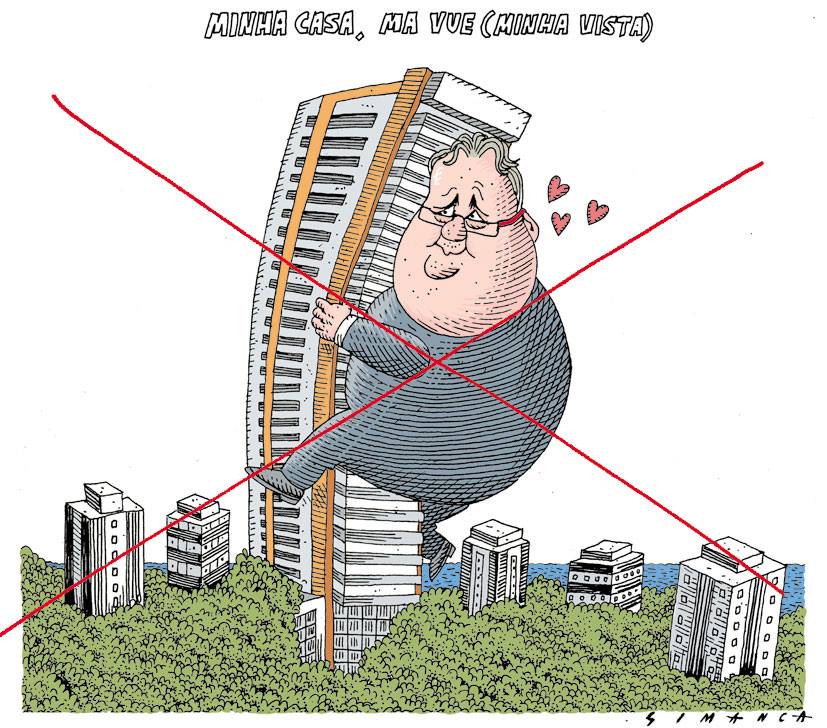 According to Osmani, a new change in management further complicated the relationship.

The pressures increased to the point that I had to explain what a cartoon was, and what the role of political satire was in a democratic society and in the free press.

I was asked who gave me my orders, to which I replied that the orders were the facts, which I researched in depth, consulting various sources and putting my opinion in the form of graphic journalism, using political cartoons.

I was then warned not to touch on certain subjects and characters, an impossible task in the midst of the political and ethical rot in which Brazil finds itself.

When they warned you not to touch on certain subjects or characters… did they talk about names of specific people and issues? How did they argue that “invitation” to keep quiet?

They don’t usually say the “official” reason. They started with hints, then became more direct: Temer, Geddel…the government in general. In the end what they want is for you to self-censor. You have to be firm.

how and when were you informed of your dismissal?

The editor-in-chief told me on 9 June 2017, during a meeting in her office. It was not a personal decision, it was something that apparently came from above. From the director general.

This dismissal was something that could happen at any time. A little more than a year before I was fired, I had taken a clear position against the impeachment of President Dilma, considering it a political process, without any evidence. A real injustice. Time has proven me right. Fools are incorrigible.

what was the last cartoon published in the newspaper?

The one I have attached.

what local repercussions did your notes on censorship and pressures from the newspaper have?

I received several awards and prizes for my work, published during the years I worked at the newspaper. The management and the new investors had no idea of the repercussion or probably didn’t care about it. The solidarity I received was enormous. I heard that a large number of readers cancelled their subscriptions.

did the paper give any kind of public explanation about your dismissal?

No, it kept quiet because it knew I was right.

During 15 years of cartoons, the newspaper has had different managers and at least four governors in the country. With which managers and governors do you think it has been more difficult to do your work?

During the Lula and Dilma governments there was no problem with my cartoons criticising the mistakes of the left. Without a doubt, the work has been more difficult within the newspapers with the government of the usurper, Michel Temer.

I was also asked not to do caricatures of the mayor of Salvador, ACM Neto (Partido Democrátas), the grandson of a famous Bahian caudillo, who does not like satire either.

Coincidentally, he and his family have a newspaper that competes with the daily “A Tarde”, which has no room for political cartoons.

I suspected, but never imagined, that there would be so many grumpy right-wingers in Brazil. It may be the effect of a lack of reading, as Unamuno said: “Fascism is cured by reading”.

When there is a democratic rupture by means of a coup, either military or parliamentary, which is the new style used in Latin America to remove a president elected by popular vote, this profoundly affects freedom of the press and freedom of expression.

If there is no change, the tendency is for things to get worse. The Brazilian Congress is dominated by crooks and crooks. Evangelicals have 197 seats, for the moment they are not a majority.

The goal is to elect an evangelical president of Brazil in the future. Rio de Janeiro recently elected a disastrous mayor from the Universal Church of the Kingdom of God, popularly known in Latin America as “Pare de sufrir“.

Should these religious people disguised as politicians or vice versa have a majority in Parliament, they will endanger the secular state and consequently other freedoms will be suppressed.

The Brazilian Federal Police found on Tuesday 5 September suitcases and boxes full of moneythe money was found in a flat that was used by former minister Geddel Vieira Lima, a former close associate of President Michel Temer. So far they have counted the equivalent of more than 10 million euros.

Geedel was arrested in July for obstruction of justice in a corruption-related case and charged with influence peddling.

Accused of receiving a bribe of 20 million reais in exchange for loans from the public bank Caixa Economica Federal when he was vice-president of the entity, he was imprisoned for ten years and has since been serving house arrest.

Osmani Simanca was born in Santa Clara, Cuba, in 1960

He graduated from the Academia de Bellas Artes “San Alejandro” and from the Instituto Superior de Arte de la Habana.
He began his career as a cartoonist in 1975, in the humorous magazine Dedeté, in Havana.
His drawings have been published in numerous magazines and newspapers around the world. Since 1995 he has lived in Brazil, where he obtained his nationalitySince 1987 he has received several awards and participated in exhibitions in Cuba, Brazil, Italy, Iran, Greece and Spain.

Brazilian court row over a kiss in a comic book