“The best stories are the ones that can’t be told”, this sentence by Ramón Boldú Salvador (Tarroja, Lleida, 1951) describes the last two books I have picked up and read.

I kid you not, I ordered them out of an outbreak of nostalgia, but also with the firm intention of recovering those good comics that I remember having had and that were lost in some move, or who knows.

The passing of the years makes you forget many of the details of certain readings has its advantages. You can go back to them and be surprised by what’ s new from the past. Boldú was one of those El Víbora cartoonists who made you stop at his pages out of obligation to read each new crazy story he wrote. They were so engaging that, at times, you even forgot to look at all the drawings.

You can, and should, buy other books by Boldú, but these are a good starter to taste his stuff if you are not old enough to have read them in their time and context.

Some people, just by browsing through these books, might say that funny phrase, so fashionable nowadays, “this couldn’t be published today”. Well, it is still being published today. In their day, almost all those who published certain things during those years had much more serious problems than the current tantrums over comics from forty years ago.

I don’t intend to write any criticism or analysis, I’m not good for that sort of thing. The 112 pages of “El arte de criar malvas” can be read in one sitting, but “Bohemio pero abstemio” is the kind of book that can be read for twenty or thirty pages per session in order to stretch it out and make it last

Its vignettes in black and white breathe much less besieged by the texts and in colour they are more beautiful to read, even so it is very enjoyable. Just for seconds sad and raw, it’s a non-stop barrage of embedded narrative, a parade of a multitude of characters, some of them very popular, and an absolute absence of modesty.

Perhaps the question that Boldú has been asked most often is how much truth and concessions to fiction there is in his stories and protagonists, but this matters little or nothing to me, because the real pleasure lies in the way they are told. Boldú is a brilliant and dynamic storyteller, a task for which he has been awarded several prizes.

In 1995 came “Bohemio pero abstemio” (Ediciones la Cúpula), the first book of his autobiography with the stories published in El Víbora, which would be followed in 1998 with “Memorias de un hombre de segunda mano, 1968-1982“. (Glenat)”.

The following year saw the publication of the tomazo “Bohemian but teetotaler, memoirs of a second-hand man” (Astiberri), which merges and chronologically orders the stories of his autobiographical books from 1995 and 1998, corrected and updated in 208 black and white pages in hardback binding.

*Here is nothing promotional or advertising in this text, in fact I have bought it in a bookshop.

I say that it is stolen because I have stolen it from him, he has it on his website as a “timeline” and I have taken it and remixed it with malice aforethought for this text. These and many other passages are also recreated in his vignettes

Ramón was born on 13 July 1951 in Tarroja del Segura, Lleida, in his house above the family bakery.

The memories of his childhood, some of them traumatic, such as the explosive dirty things, and others of a sexual nature, have ended up irremediably in his books. In addition, from an early age he began to scribble his first jokes on any book, including those on religion.

In 1968, Ramón Boldú began to publish jokes in the Esplugues de Llobregat (Barcelona) Town Hall magazine, thanks to his girlfriend Dolores, who had an uncle working in the Town Hall.

That year, he worked as a cashier at Muebles Malda and then went to work in accounting at Laboratorios Ferrer (a laboratory owned by Carlos Ferrer Salt, who would later become president of the Spanish Olympic Committee)

As an accountant, he claims that he learned every trick in the book to cheat on the laboratories’ profit declarations and thus avoid paying taxes, doing double accounting, following the directives of his boss.

In July 1976 he began to work side by side with the president of Ediciones Z, Antonio Asensio, although from the outset each of them thought differently, as can be seen in this photo of Antonio Asensio pointing to one side and Boldú, the one with the beard, pointing to the other

Boldú recalls those days:“He was trying to get rich, become president of Barça and carve out a political future for himself, and I was a man who wanted to devote himself to comics, with no sporting interests and totally apolitical.
I started to publish jokes about politics and current social events in the recently launched magazine Interviú.
My wife gave me a big scolding for having left the company where I worked as a programmer (and was insured) to go and work for a magazine (Interviú), without insurance, earning less and with a daughter who ate a lot“.

Creator of the Lib logo

This is how he remembers the whole thing:

“Steve Jobs commissioned Rob Janoff in 1977 to design the logo for his company. After days and weeks of thinking and biting apples to see how they looked, he drew the bitten apple of Apple, and he says that the bite means knowledge

“A year before (in 1976 ), Antonio Asensio (editor of Editorial Z) asked me to design a logo for a new magazine that was going to be called Lib, and he told me he wanted it for the next day

“In the morning I appear with the logo of the bitten pear (I created it in just one night, which I spent thinking up and drawing this logo by hand and from memory as I didn’t have any pears in my house) and I tell him that the bite means biting the pear’s buttock, as the pear shape has always looked to me like a woman’s waist and arse seen from behind, this is knowledge. And also… Which of the two logos is more morbid, mine or Apple’s copy?”

“I leave Asensio’s office, with the promise that he will tell me something about my project. On the way out are the cartoonists Tom and Romeu (who were waiting outside) with another project for a weekly humour magazine”

“The magazine was El jueves, and Asensio, between mine and Tom and Romeu’s, decided to invest in the project of those two, and so El Jueves began. Not surprisingly, El Jueves magazine is “political humour” and a bit finicky, and my magazine was greenish and bloody humour, which is why the name of the magazine was anti-commercial: PUS“.

You can continue reading his autobiography until 2020, embellished with interesting photos and documents of the time, in the section“Secrets (that I haven’t told yet)“, because I’m already feeling a bit shy on Ramón Boldú’s website because I’m already shy to keep stealing things from a colleague.

Case against the illustrator of the comic book On és l’Estel-la? is closed 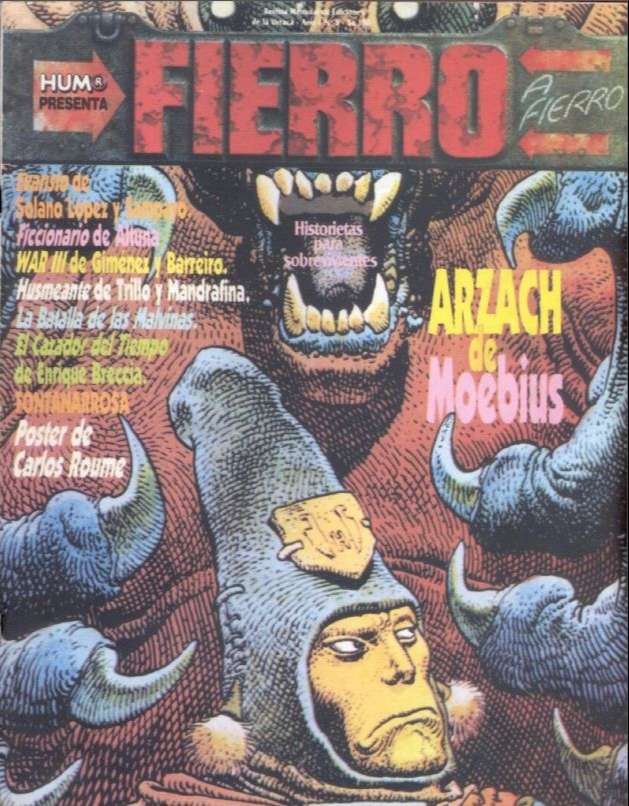