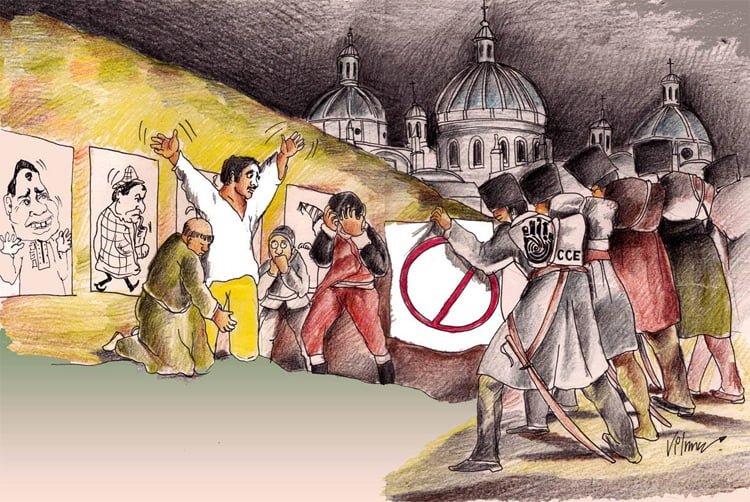 Vilma Vargas’ cartoon, “Vilmatraca”, protesting against the censorship of part of her exhibition.

The title of the exhibition already anticipated that something could go wrong: “HUARMIcaturas por la libertad“. It opened at the Casa de la Cultura Ecuatoriana – Núcleo del Azuay.

This is no less remarkable for being commonplace, but in this case it is worth looking at the response on the part of those in charge of the gallery. I can already tell you that it is a true hymn to cynicism and hypocrisy.

Vilma Vargas selected and sent all the material she considered should be part of her exhibition at the Casa de la Cultura Ecuatoriana “Benjamín Carrión”.

The Casa de la Cultura decided that neither the videos, nor the files, some texts and the catalogue should be included and cut them out. Faced with this, the author published on her blog all the content the author, who the organisation had decided not to show them, expressed her discomfort on Facebook:

I declare my protest against the censorship imposed on my drawings in the exhibition “HUARMIcaturas por la libertad”, having prevented the circulation of the catalogue, the withdrawal of the cards of the works exhibited, the prohibition to show the animated videos to the public and the cutting of the curatorial text that supports my artistic proposal.
It is paradoxical that all this censorship should have taken place on World Press Freedom Day itself, in an institution that debates its autonomy on a national level and that tramples on its own discourse before the president in office.
The drawing with which I protest could not be more allusive to the historical fact of the Fusilamientos del 3 de mayo by Francisco de Goya, which today has become an allegory for my claim in a country where they try to impose a single truth on us.

Vilmatraca also made his protest public on the day of the inauguration.

In the first instance they blame the curator of the exhibition and organisational and protocol details, but the final response of the president of the Casa de la Cultura, Iván Petroff, contains a very juicy repertoire of incoherencies and an evident and shoddy declaration of intentions.

The response, from which a few paragraphs are extracted, can be read in full here.

The Casa de la Cultura Ecuatoriana “Benjamín Carrión”, Núcleo del Azuay and on behalf of the President of the Institution, clarifies to the general public that the pictorial exhibition entitled “Huarmicaturas” by the artist Vilma Vargas from Riobamba, which is being exhibited in the Salón del Pueblo of the Institution. For the same reason it is open to the public in the rooms of the museum of colonial art in El Carmelo.

And as the festival begins, what was an exhibition with some political vignettes ends up being cut for political reasons. And they admit it without batting an eyelid, calling the content pamphleteering.

… After reviewing this material we could see that the theme of the exhibition was distorted and politicised . In a catalogue, which was not circulated because it did not fulfil the objective of being a letter of presentation for the artistic proposal, for the same reasons we also proceeded to withdraw the leaflets that were a pretext to delve into the theme and some videos that had the very clear function of a pamphlet. We consider that these elements had the sole purpose of turning the exhibition into a platform for political opinion and criticism, thus distorting the institutional mission and vision which, as in the case of the Casa de la Cultura Ecuatoriana, is to promote, support and sponsor works and artists without any bias

that implies support for any political side or position of any nature. Culture by essence is pluralistic, democratic and non-sectarian.

To make matters worse, the censor declares himself to be censored

On Wednesday the 4th of this month, taking advantage of the presentation of the exhibition, the curator once again used the space of the Salón del Pueblo and the guests present to develop a politicised discourse that was not in keeping with the event and which was a way of censuring the institution, accusing it of being inquisitorial

and other opinions that are not worth reproducing and which we express our rejection of.
They also decided that, in order to “oppose the regime”, they should go elsewhere to fry asparagus.

There are suitable spaces for political opposition to the regime. We do not believe that the Casa de la Cultura, as an institution with such a long history of openness to different aesthetic proposals, should now become a platform for any political action

. Wherever it comes from.
It is not freedom of expression that has been censored, they claim. Now they are taking the opportunity to blame the author for a malicious act in an attempt to polemicise.

The current administration is fully convinced that the institution acted in a manner consistent with our ethical principles. It is not freedom of expression that has been censored in any way. It is the clear intention to cause controversy and exaggerated, unnecessary and malicious reactions

.
And they continue to blame the author for wanting to make a fuss about promotion

In conclusion, in the best of spirits, we know that the label of banned work is a promotional resource that she wants to use, and that will surely make the work known, there was no need for the fictitious scandal

: the work can and should stand on its own, its artistic quality is what made it fit into such an important space for the city.
If I ever received such a reply from any institution that decides without discussion what can and cannot be exhibited according to political positioning, regardless of colour, I am sure that the response would be anything but diplomatic.

Statements by the author in one interview, and those of the president from the Casa de la Cultura in another (from minute 24:15), in case you want to compare them.

Related, hundreds of cases in other countries: