While browsing through the sites I usually read, I found this curiosity on the blog of the cartoonist Mike Lynch and I couldn’t resist the temptation to steal it from him.

Between the end of 1995 and the beginning of 1996, someone called Crhis asked about twenty cartoonists to answer the same 20-question questionnaire. Although there are slight variations in the questions between 1995 and 1996.

Lynch, who found the images on Ebay, does not know the history behind these questionnaires. He deduces that, because the sheets show no marks of having been folded for mailing in an envelope, they may have been filled out during at least a couple of events at which Crhis approached the cartoonists to ask them to answer the “interview”.

A little more digging led me to an Amazon account and from there to the seller’s website. Some of these pages are still for sale for over $400 on Hollywood Memorabilia, a website that has a lot of collectible paraphernalia related to film, television and music, such as celebrity autographs, signed movie posters and other items.

It is interesting to read the replies together because they leave some valuable biographical information. Beyond the very irrelevant ones (half of them choose blue as their favourite colour) or whether they considered O.J. Simpson guilty or not, we can find out which films, TV shows, athletes, musicians and writers they liked. 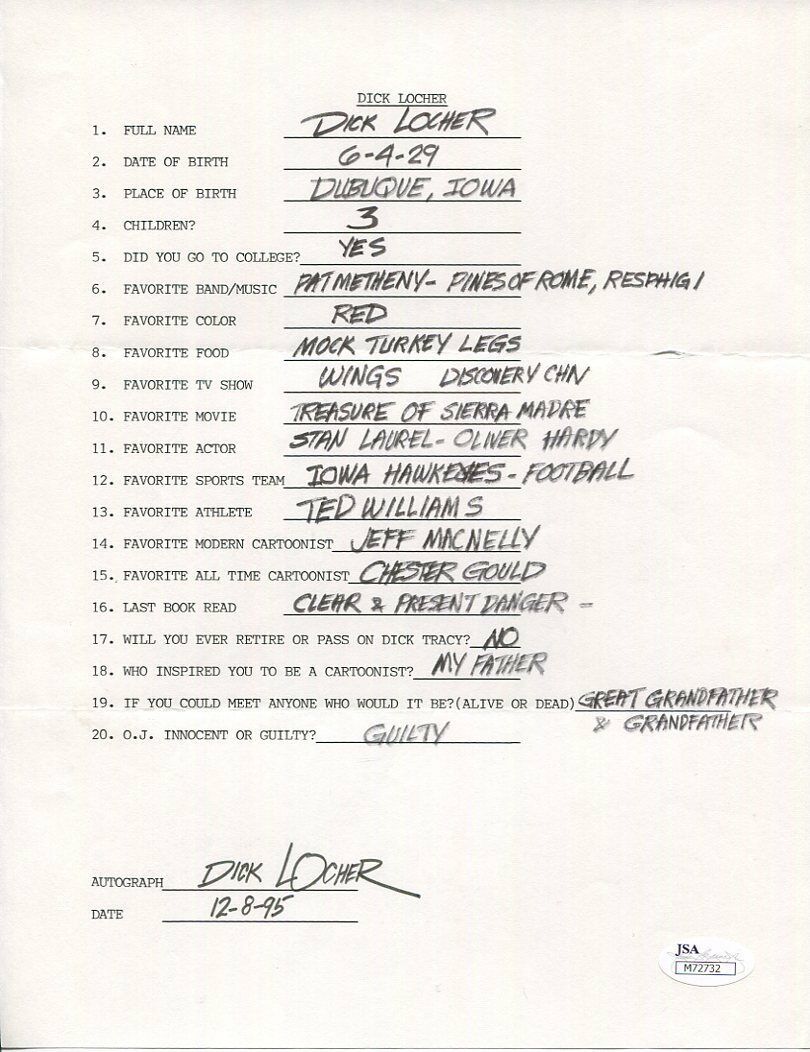 Dick Locher (1929 – 2017). He drew from 1973 to 2013 for the Chicago Tribune and was awarded a Pulitzer Prize for editorial cartooning in 1983, also inking and colouring the legendary series of Dick Tracy strips, a character created by Chester Gould. 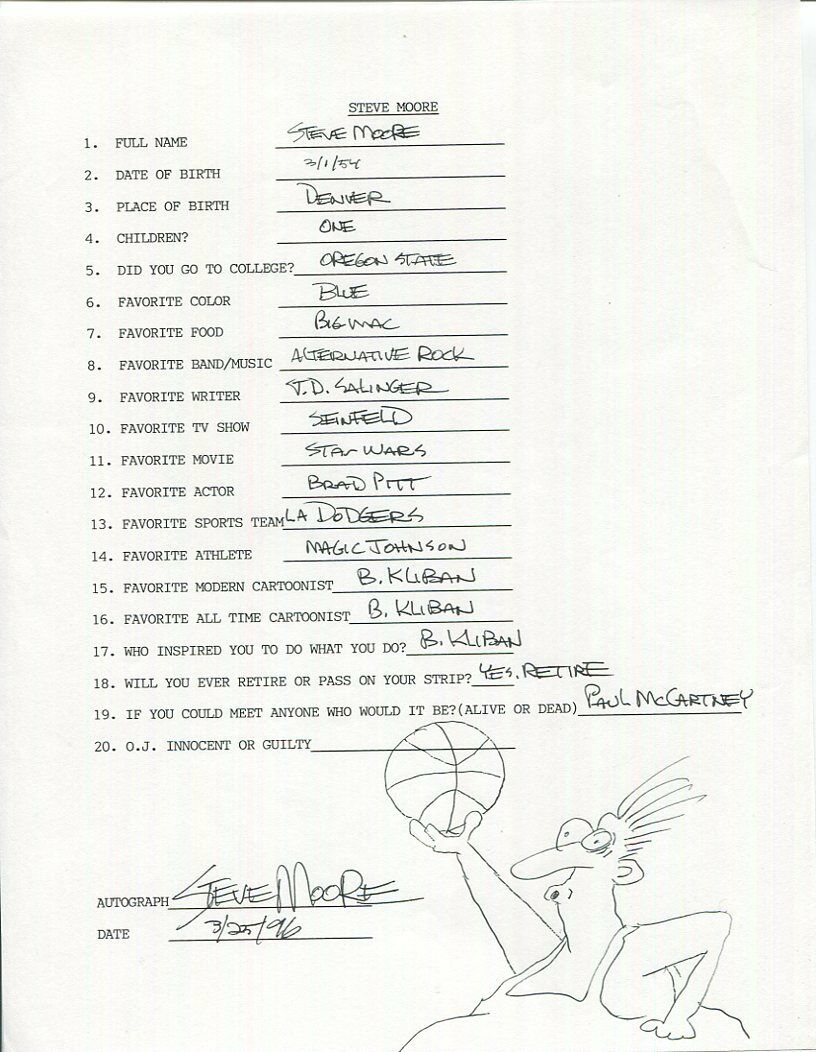 Steve Moore (1965*). Writer, producer and film director, he was a cartoonist for the sports cartoon “In the Bleachers” from 1985. Also known for the animated franchise “Open Season” and the film “Alpha and Omega”.

Stan Drake (1921 – 1997) is best known for the comic strip “The Heart of Juliet Jones“, which he created in 1953 with screenwriter Eliot Caplin. He was active until 1989, working on the Blondie strip, a series for which he had done artwork since 1984. 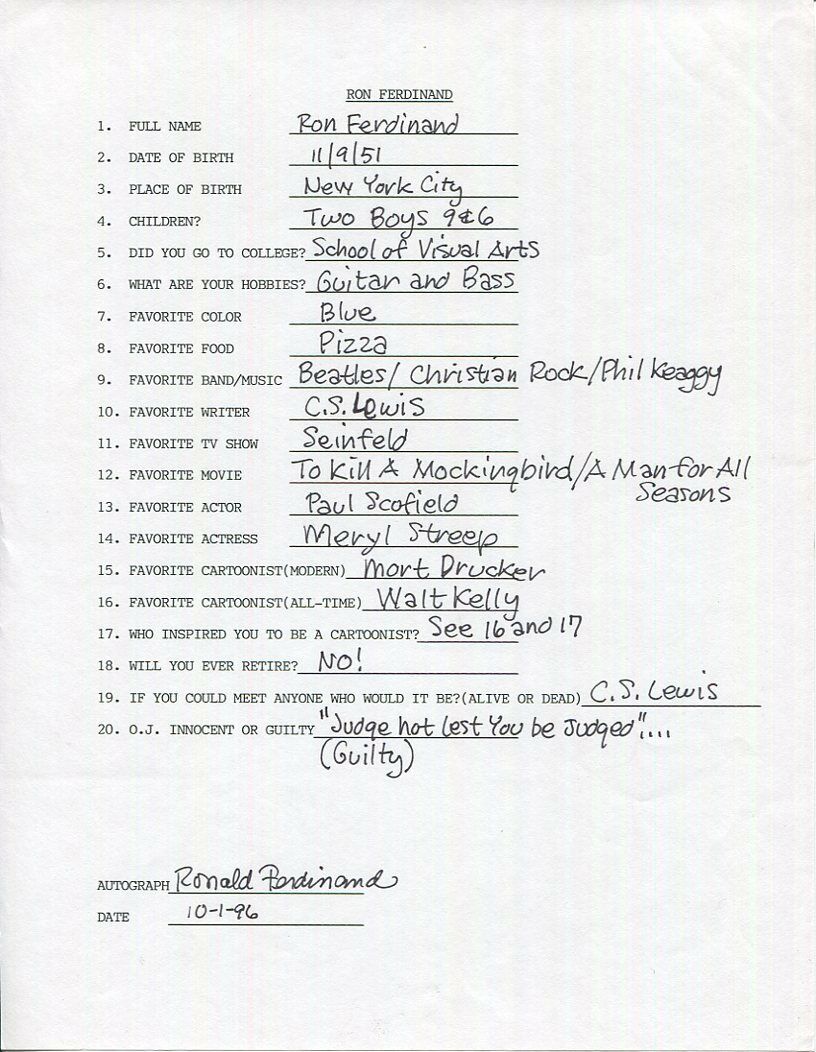 Ron Ferdinand (1951) one of the cartoonists of the Sunday pages of “Dennis the Menace”. 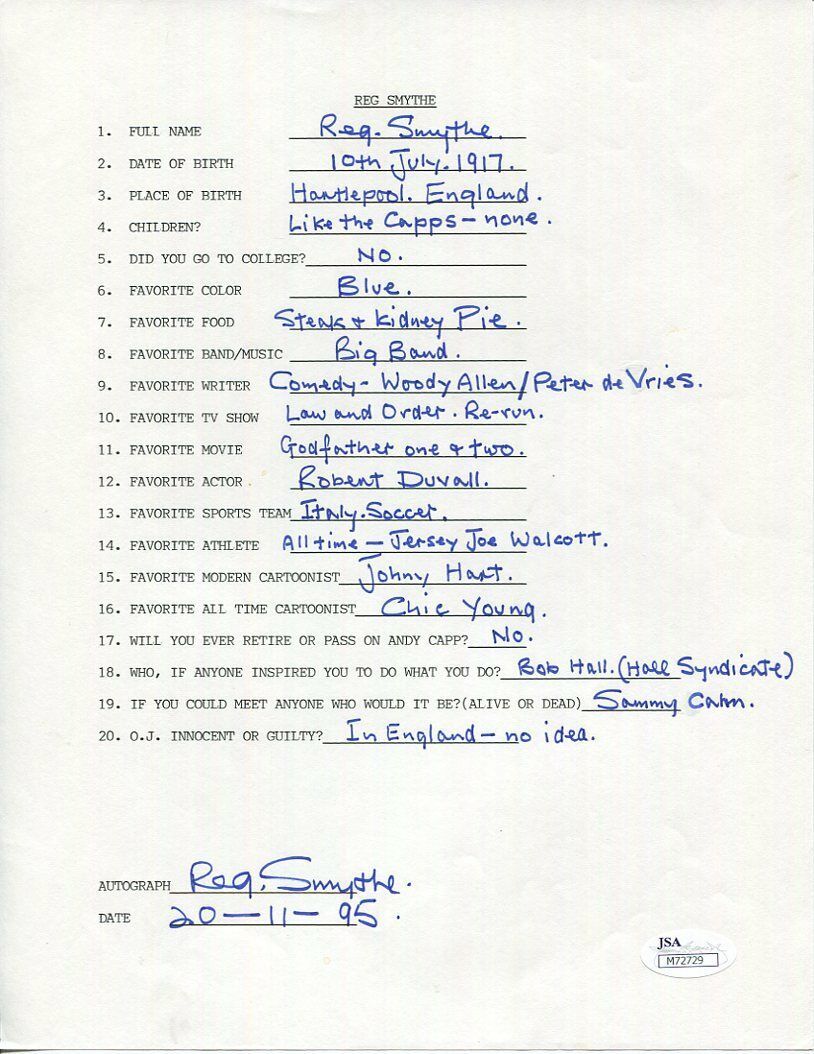 Reg Smythe (1917 – 1998) his popular strip “Andy Capp” (1957 – to the present day) was distributed in the UK and USA. The continuing strip is now drawn by Roger Mahoney with Lawrence Goldsmith and Sean Garnett as scriptwriters.

Ray Billinglsey (1957) is an  cartoonist with several awards including the Humanitarian Award from the American Lung Association and author of the “Curtis” strip distributed by King Features for 31 years in more than 250 newspapers in the USA. His Curtis strip has been praised by education professionals for its sensitive portrayal of urban life and family values. 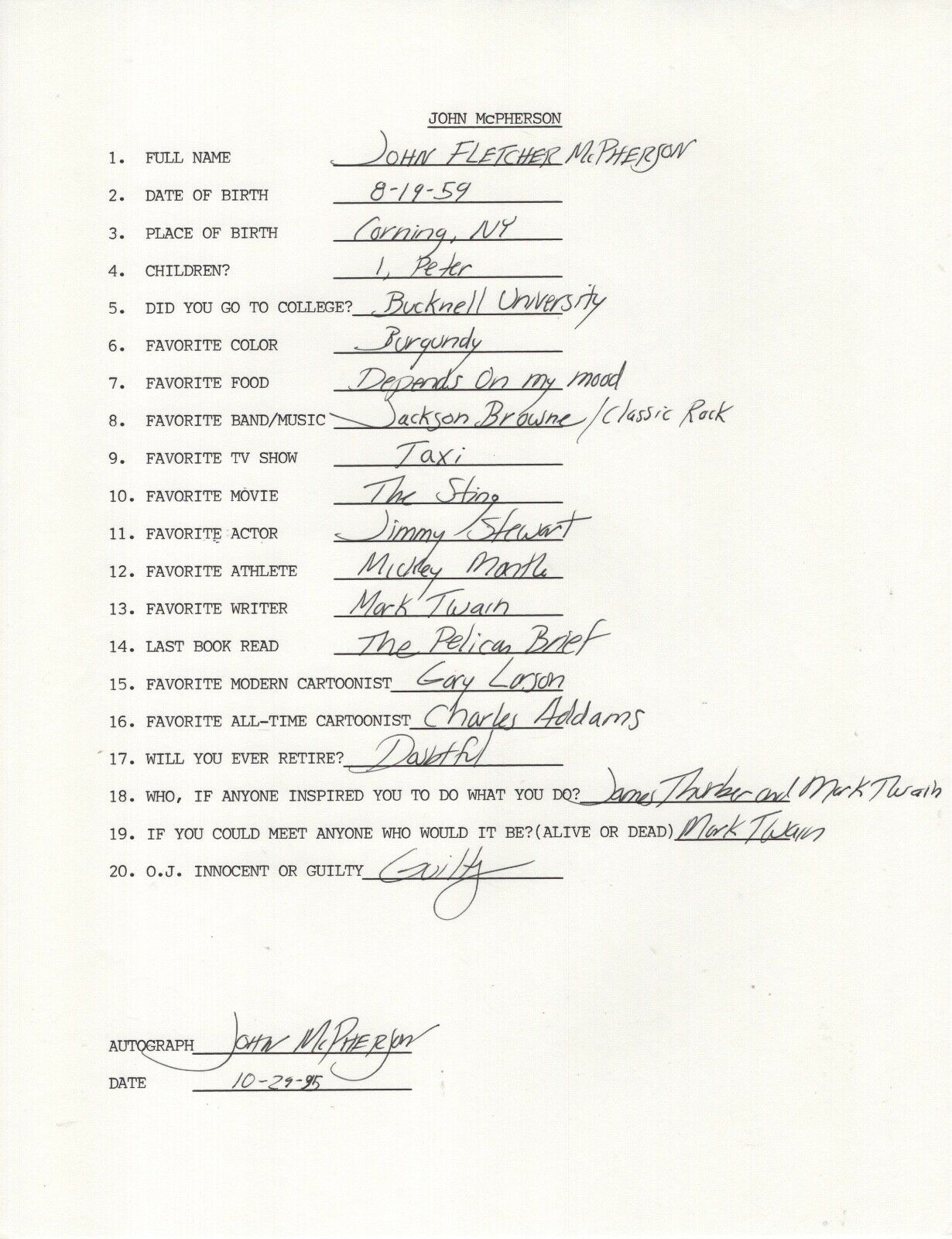 Jeff Shesol (1969), who drew the “Thatch” strip from 1994 to 1998, is a historian who worked as a speechwriter for President Bill Clinton and is now a partner in the Washington DC firm West Wing Writers, a speechwriting and political strategy firm.

Jeff MacNelly (1947 – 2000). Brilliant cartoonist and creator of the “Shoe” strip. He began working at the Chicago Tribune in 1982 and continued to accumulate recognition in his field, winning three Pulitzer Prizes (1976, 1978 and 1985) for his cartoons and being named “best in the business” among political cartoonists in 1987, 1989 and 1993. In 1991 he won the Sigma Delta Chi National Award for editorial cartooning. The National Cartoonists Society twice awarded him its highest honour, the Reuben Award. 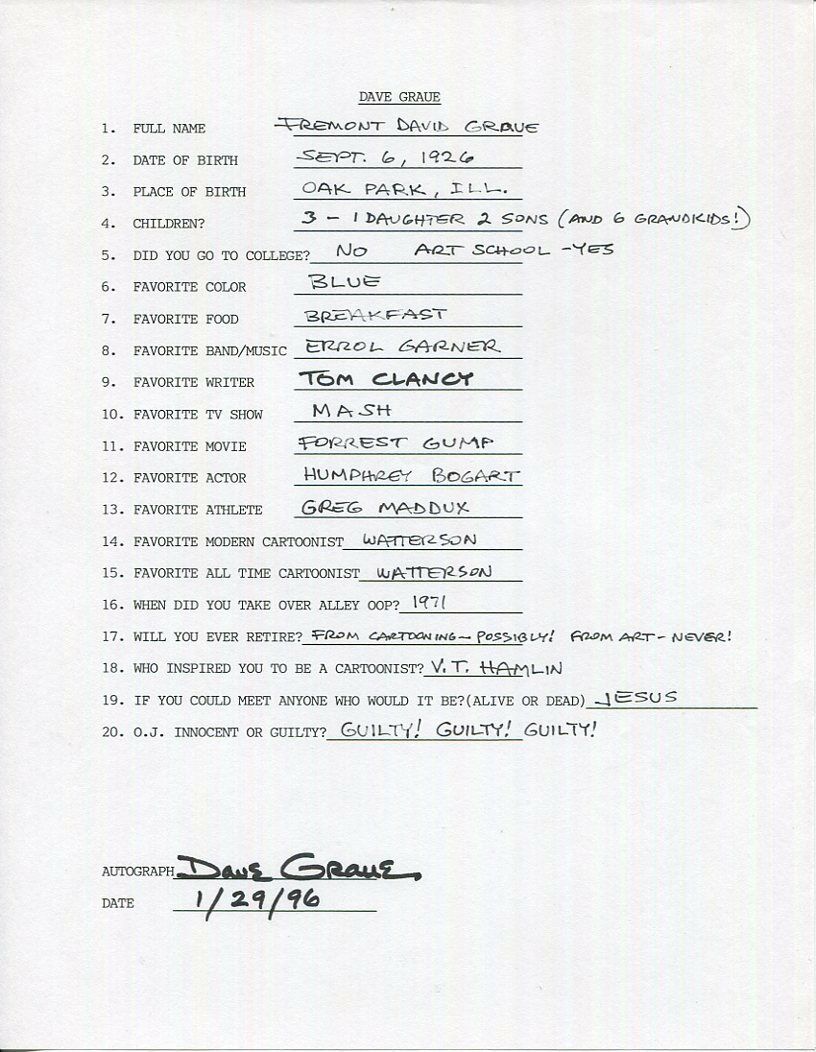 Dan Piraro (1958) Creator of the “Bizarro” series syndicated since 1985. In 2018, Wayno took over the daily cartoons and Dan took over the Sunday section. 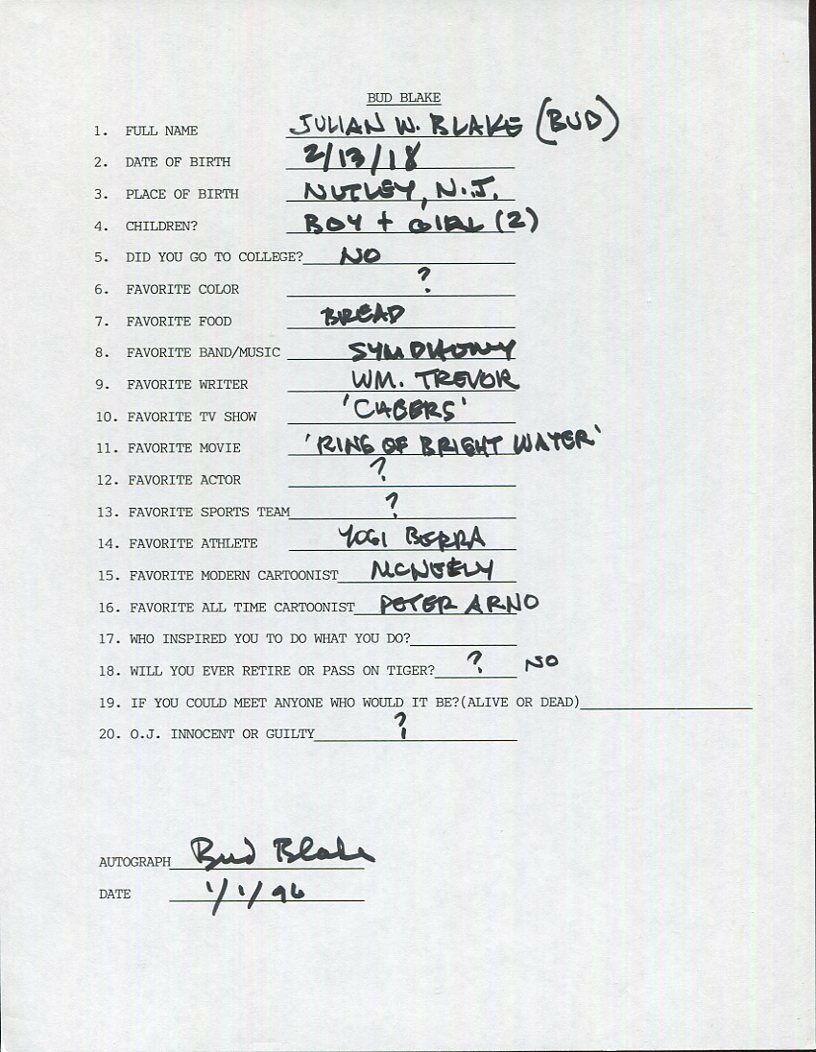 Brooke McEldowney (1952), creator, cartoonist and scriptwriter of the strip 9 Chickweed Lane, on which he has worked for 27 years.

Brian Crane (1949), cartoonist and creator of “Pickles“, a strip starring a retired couple, Earl and Opal Pickles, their family and their pets, Muffin and Roscoe.

Brian Basset (1957) His retro aesthetic series, Red and Rover, is about the unconditional friendship between Red, a baseball-loving boy who dreams of going into space, and Rover, his faithful squirrel-hunting dog. Basset previously worked as an editorial cartoonist for The Seattle Times.  His father, Gene Basset, was also a sports and political cartoonist for more than 40 years, until his retirement in 1993. 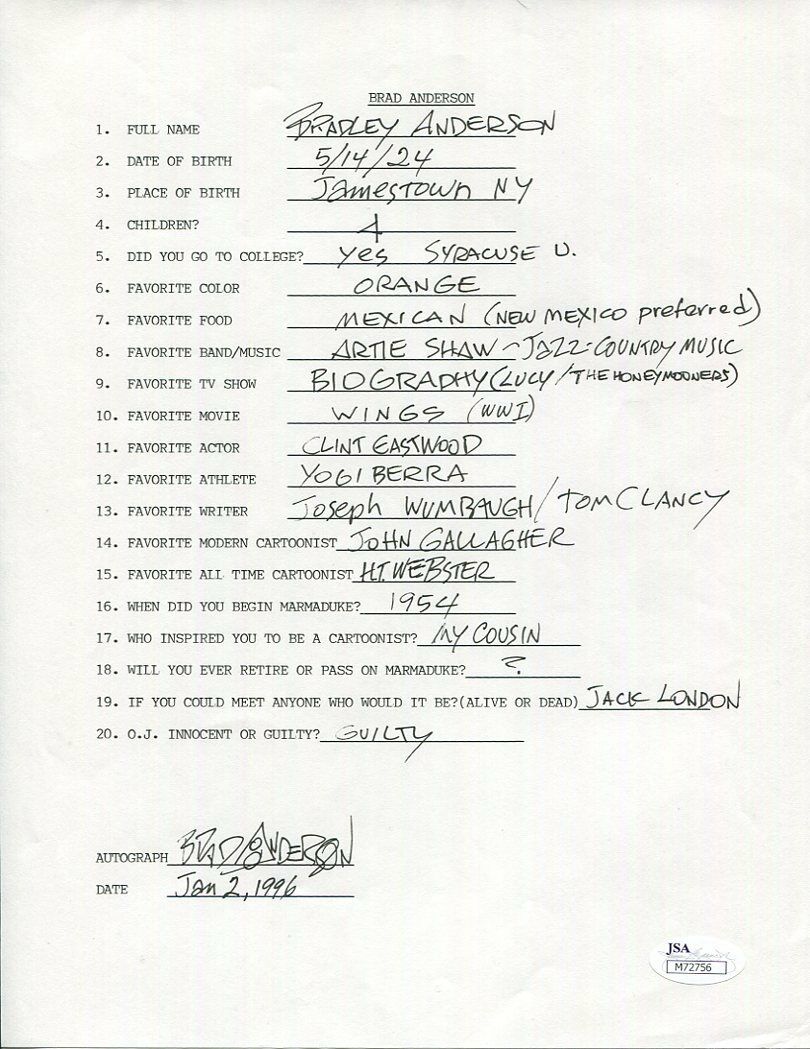 Bil Keane (1922-2011) Keane, according to some references, learned as a child to draw by imitating the style of The New Yorker cartoons. He would later work for the Philadelphia Bulletin from 1946 to 1959, where he launched his first periodical comic strip, Silly Philly.

In 1954, he created “Channel Chuckles“, his first nationally syndicated strip. From 1981 to 1983, Keane published the strip “Eggheads” in collaboration with his son Jeff, who now draws and writes The Family Circus series.

20 cartoonists who did not die a natural death