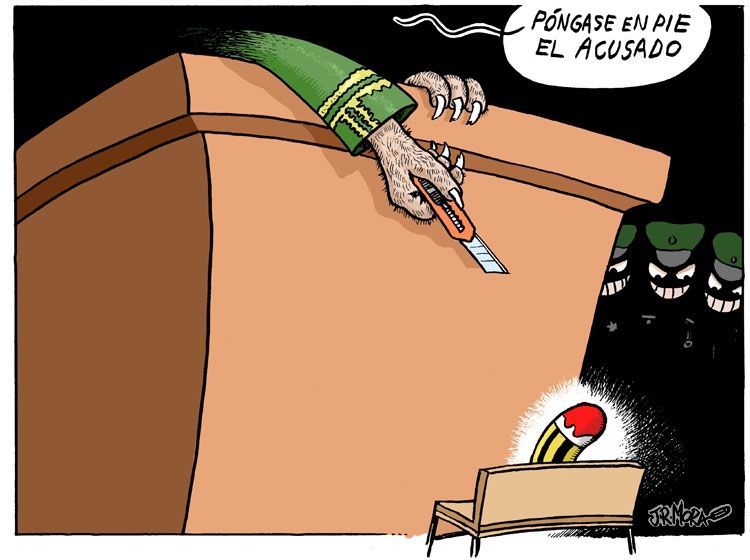 “Cartoons in Court: Towards a Forensic Analysis of Visual Humor“

Is a project of the Institute for Advanced Study CEU (IAS CEU) based in Hungary. The aim is to analyse humour and its relationship to legislation in order to provide advice and information on the link between humour, offence and freedom of expression.

For three years the IAS CEU will coordinate a team of academics who will research different legal issues surrounding cartoons and humour. Until 2023, the team will have stays in IAS institutes in Israel, Sweden and the Netherlands.

The work will be carried out along different lines such as the investigation of jurisprudence applied to cases related to controversial cartoons, the analysis of ambiguity in cartoons and the historical perspective on controversies arising from graphic humour.

This will be complemented by interviews with cartoonists and jurists. The five-person research team, which includes the Dutch cartoonist, will work in collaboration with groups from the European Commission and the European Parliament Tjeerd Royaardswill work in collaboration with collectives linked to graphic humour such as Cartoon Movement, Cartoonists Rights Network International and Cartooning for Peace.

“Because of its inherent ambiguity and elusiveness, humour can make it particularly difficult to know where someone’s “right to be offended” begins and where someone else’s “right not to be offended” begins. The challenge is even more evident in the case of cartoons, whose high degree of implicitness and condensation can further contribute to blurring the line between lawful and unlawful humour. Significantly, cartoons have been at the centre of several legal debates and court cases in recent years, from the Mohammed cartoon controversy of 2005-2006 to the ongoing legal proceedings over the Charlie Hebdo attack.

These legal controversies are especially topical in the digital age, where potentially offensive material can easily gain global exposure, often beyond its original context and intent.

The legal issues raised by controversial cartoons are still largely unresolved, and judges find themselves without a solid legal basis when faced with conflicting interpretations of an ambiguous cartoon. Such issues clearly pose a crucial test for the democratic negotiation of freedom of expression. Yet despite their urgency, the following questions remain unanswered by academics, politicians and practitioners:

How can judges deal with the ambiguity of offensive cartoons?

How can a distinction be made between ‘reasonable’ interpretations and artificial misunderstandings?”
Related:

Infographics, humour in trouble
the data for this infographic is drawn from an analysis of 165 cases of cartoonists who have been in trouble of some significance between 1978 and 2020 because of their cartoons or satirical illustrations. There are also some cases of other people who, without being cartoonists, have got into trouble for sharing them.

News page, back to RSS feed