Over 11,000 Garfield strips up for auction

Original Garfield ink on blue pencil from January 13, 2001 and his certificate of authenticity dated December 29, 2001 to be auctioned on 29 December. 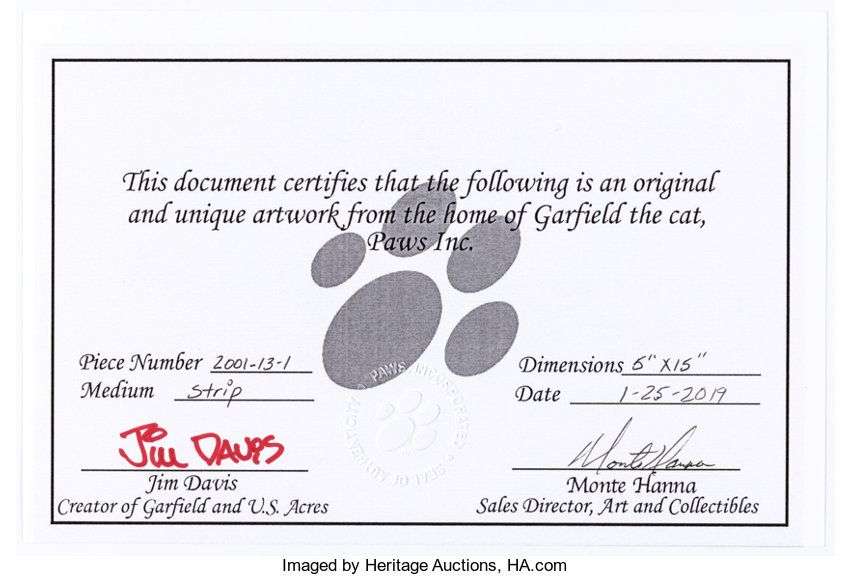 The cartoonist Jim Davis is offering for sale more than 11,000 originals on paper. The strips will be auctioned by Heritage Auctions over several years, at a rate of a couple of strips a week This is the one for which bidding is open today.

The strips up for auction are the first ones that appeared in print in 1978 until those published in 2011, when Davis switched to tablets and began drawing them entirely in digital format.

There are discrepancies about the date of Garfiel’s birth and first publication in the press. It is said that the first published strips date back to 1976.

In August 2019, a fan and youtuber called “Quinton Reviews” discovered some of Jim Davis’ early work including the original weekly Garfield strip, then titled “Jon”, in which the famous lasagna-addicted cat was born in a small local weekly newspaper two years before the strip became world-renowned through syndication.

First Garfiel strip published on 8 January 1976 in The Pendleton Times, featuring the characters.

The auction house began offering the strips in August. At the moment it is auctioning two originals a week. Other longer ones, which were published on Sundays, are offered during the big auctions held during the year.

According to AP the comic art collector Nagib Baltagi has already bought about 20 strips so far and plans to get his hands on some more.

Jim Davis, 74, who has no intention of retiring, says that over the years he has given some of the strips to family, friends and collaborators, and others have become part of the collections of various museums. He also tried to sell them on his website for a few years. Davis kept most of the originals stored in a climate-controlled, fireproof vault. Davis says the auction is an opportunity for collectors and Garfield fans to get their hands on an original without having to send them one by one to prospective buyers.