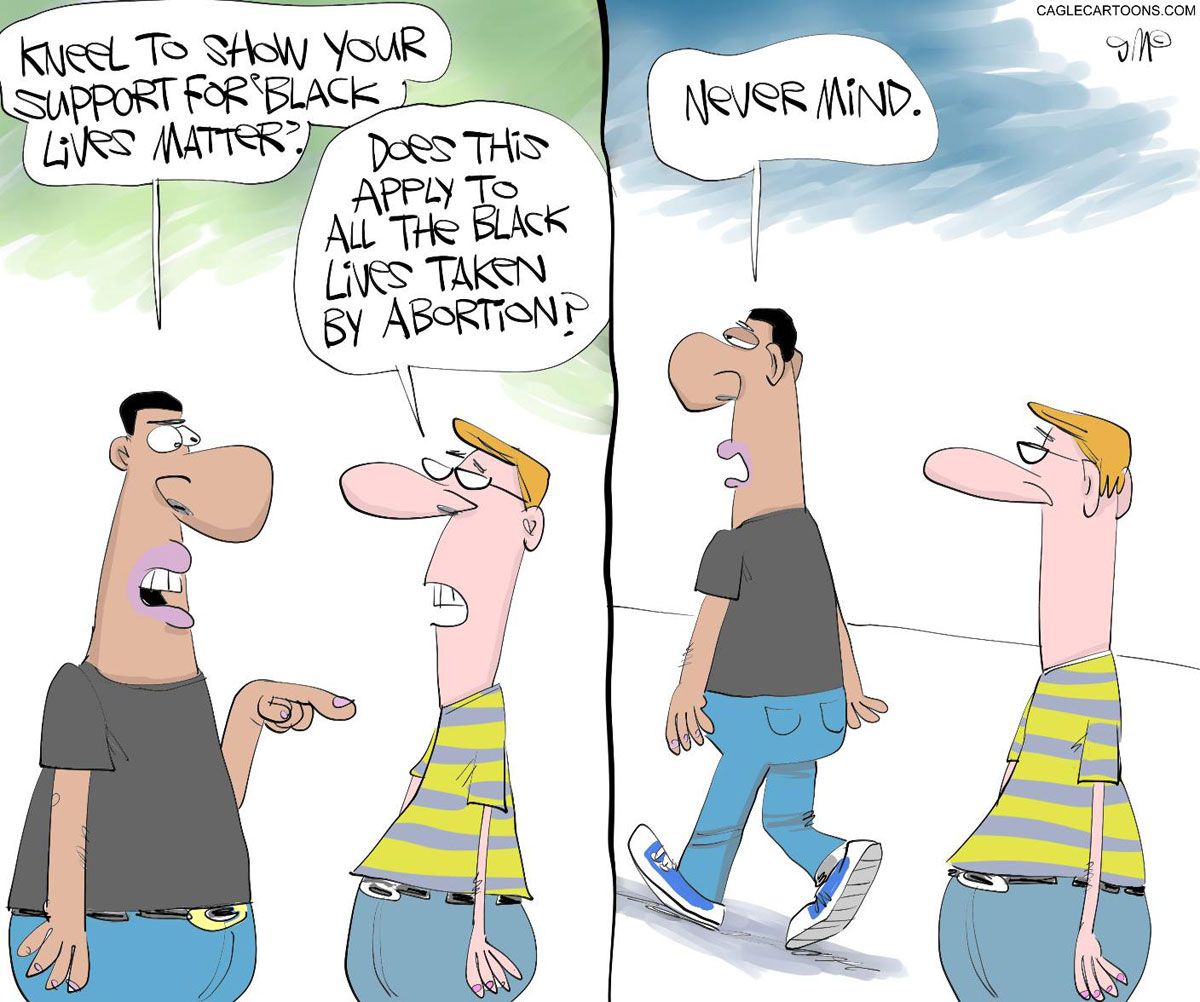 A cartoon on abortion and blacks that has led to the disappearance of the cartoons in the newspaper.

“Kneel to show your support for Black Lives Matter.”

The white man responds by asking:

“Does this apply to all the black lives taken by abortion?”

The black man turns and walks away as he adds:

After receiving complaints and criticism, two days later, the paper made public (Visit with VPN) this brief apology:

The Morning News erred grievously in its choice of a syndicated editorial cartoon that ran Thursday on the opinion page. The cartoon was in very poor taste and in no way reflects the values of Morning News management or staff. We showed poor judgment and lacked sensitivity, and we deserve criticism. Our readers deserve better from us. We sincerely apologise for the error, we apologise, and we pledge to do better.

And another two days later, on 15 June, Bailey Dabney cuts to the chase with a humorous text, more opinionated than anything else, which has as its title the advance of a sharp decision: Editorial cartoons are dispensable thus following the path taken by 1 year ago now The New York Times. Although Bailey Dabney here goes a step further, saying in a nutshell that there are hardly any “good” cartoons and they are all to blame for the world’s ills.

Last week, a distributed editorial cartoon we published set off a firestorm of emotion. I’m appalled that this found its way into the paper. Sometimes, busy people make mistakes. I know our editor well enough to know that it was just that, a mistake.

Some readers felt insulted, hurt, angry and/or saddened by its publication. The readers were right to feel that way, and we apologise.

It was a terrible mistake on our part to publish such an inflammatory cartoon. We have apologised online, in print and in dozens of emails, phone calls and text messages, and again here today.

We consider our editorial page to be a broad marketplace of thought. Very little of it is ours. The syndicated pieces and letters are endorsed only by their authors, certainly not by us.

In my opinion, editorial cartoons are expendable. None of them are produced by our staff, and they rarely represent a local issue. They are done by an artist in another city who never has to face his readers.

Almost every editorial cartoon these days takes a hard jab at someone. Very few are funny. Instead, they are often divisive and vicious.

The process of choosing editorial cartoons is vulnerable. Often cartoons appear that mean one thing to one person and something completely different to another. Often there are no good choices. I see no reason to keep publishing bad editorial cartoons.

We will continue to take responsibility for publishing an offensive cartoon, but after the uproar we caused last week, we have taken the decision to suspend the use of editorial cartoons on our opinion page for the time being.

There may come a time when we decide to resume publishing cartoons, but that time is not now.

In the immediate future, we will fill that space with other, better content. 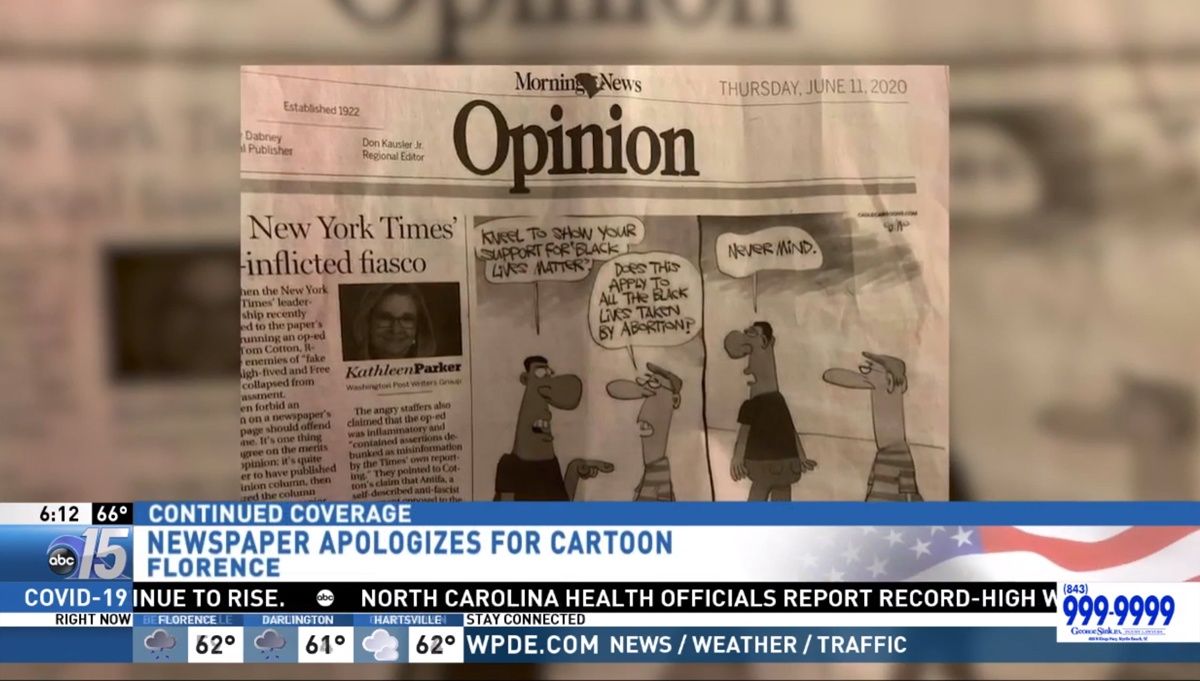 The position of the cartoonist

At statements to ABC 15, Gary McCoy doesn’t fix the issue much and says:

“The message of my cartoon is very simple: unfortunately, too many in the black community remain silent on the issue of black abortion. According to US census data, blacks represent only 13% of the population, yet more than 30% of aborted babies are born to black mothers.

It is the number one killer of all African Americans in the nation. I want more black babies born, not fewer. It’s hard to see any racism in that. I’m sorry Mr. Kausler caved and apologised for spreading the cartoon. Giving in to the bullies of the cancellation culture will only whet their appetite more.”

ABC15 McCoy points out that the cartoonist cited as the source of these alleged abortion facts a christian perspective“website, data that ABC15 says it has notbeen able to independently verify.

With this cartoon it’s clear to me. It looks like the cartoonist is trying to push his poisoned anti-abortion discourse in any way he can, and in the process he wants to claim that black people have more abortions because they are black, and so he takes the opportunity to call them murderers, thus looking for a link with the protests related to the Black Lives Matter story, and along the way he has happily eaten statistics, very possibly false, because they fit his bias.

Be that as it may, the joke has a manipulative, redneck, racist whiff to it that does not seem unintentional and gives critics a good deal of reason. Even Daryl Cagle admits that he finds the cartoon insensitive.

Another thing is that in order to avoid discussions, confront arguments and positions and verify data, the cartoons are eliminated, because we start by saying that the cartoons are dispensable and we could well continue applying the same criteria to photographs, to texts and then to those who write them, and by extension we would end up with a surplus of brains and all those people who try to use them with greater or lesser fortune.

+Info about these facts.