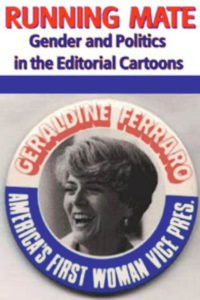 Analysing 172 cartoons in 12 US newspapers, “Running Mate” reveals the gender stereotypes that were used with Mondale/Ferraro from the moment she was elected. Despite her political and legislative record, Ferraro was first and foremost a woman in a situation in which, according to one cartoon, “any woman would do”.

Ferraro’s nomination was compared to the Miss America pageant selection. Ferraro was depicted in domestic, romantic or explicitly sexual contexts. And as the campaign progressed, Walter Mondale and Geraldine Ferraro became a couple in the traditional sense of husband and wife, although she often “wore the trousers”.

Featuring interviews with Pulitzer Prize-winning cartoonists Signe Wilkinson and Tom Toles, and featuring Ferraro’s own reactions to the cartoons, Running Mate is an eye-opening look at the role of gender in American politics.