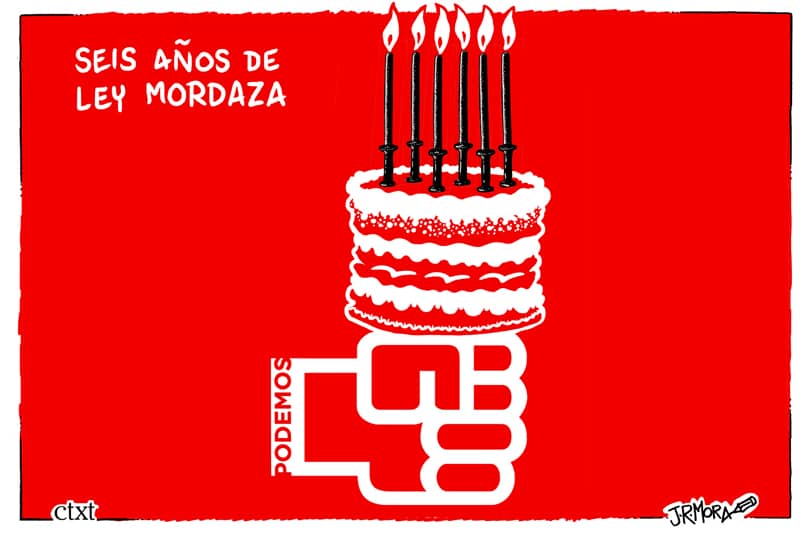 The Organic Law 4/2015, passed on 30 March, on the protection of citizen security and popularly known as “gag law”, came into force on 1 July 2015 under the government of Mariano Rajoy During its first years of life, there were protests and many other protests against this activities against this monstrosity.

At the time the gag law was the “PP’s law of repression” and when it was applied unceremoniously it was applied by “the PP’s police”. In the middle of the sixth gag law season, the discourse has become so relaxed that anyone would say that the gag went with Mariano.

The socialists promised to repeal it, to put an end to it, to kill it. It was a social emergency, a brutal attack on liberties. They promised a number of times , they would get rid of it immediately, the minute they entered government, they asserted shamelessly.

The gag law was a joker used in not one, but several campaigns, its repeal was a cry of promise from that PSOE more than known for its periodic outbursts of revolutionary imposture when it is in opposition.

Then along came Uncle Pedro with the rebates and that self-proclaimed coalition government self-proclaimed as the most progressive in history went from talking about repealing to reforming to eliminate the articles most harmful to the freedoms of blablabla and blablabla. Which they have not done so far either. In the meantime, their government partners continue to swallow toads of several tons, as if they did not want to.

Last year more than 200 organisations defending fundamental rights and freedoms signed up to a manifesto promoted by Amnesty International, No Somos Delito, Defender a Quien Defiende, the Platform in Defence of Freedom of Information (PDLI), the Spanish Development NGO Coordinator and Greenpeace demanding “once and for all the urgent modification of the Law on Citizen Security“. Well, tururú! There it goes.

Just a week ago, the Venice Commission, the Council of Europe’s advisory body on constitutional matters, called on Spain to reform the gag law and also recommended that the “repressive potential” of this supposedly citizen security law be evaluated. A cartoon from last year

The succession of the retrograde

It was in December 2014, Pedro Sánchez Pérez-Castejón addressed Mariano Rajoy in Congress and, referring to the gag law, told him: “…”You are the most retrograde President in Spanish democracy”. 2294 days later there is Pedro sitting comfortably on your gag with no intention of moving his ass.

“A return to the police state”

In 2015 the PSOE went so far as to say that the gag law was“a return to the police state“, so it was written in a campaign document called “Reasons to say NO a the gagging law”.

In that same text you can read what they thought of the law: “its aim is to punish dissidents, those who protest” and “it enables the police to exercise exorbitant powers of inspection, retention, investigation, repressionand punishment, through the criminalisation of certain behaviours”.

It is embarrassing to dive into the remnants of hypocrisy that have been left in the archive. Every time I do so I find new stellar phrases from the professionals of lies.

PSOE on the Sahara

The gag that won’t stop

Seven years of the Gag Rule