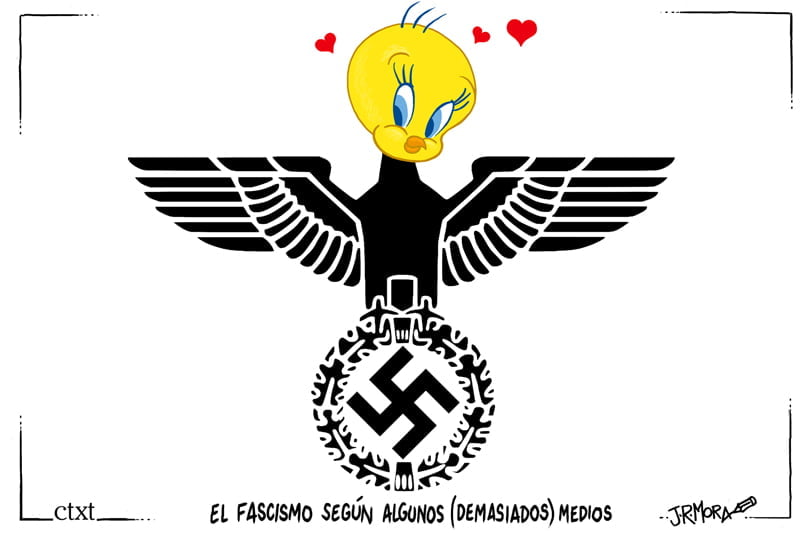 “Fascism according to some (too many) media”.

I think that if you were to ask a hundred people at random for a definition of “information”, you would get almost a hundred very similar definitions with their natural differences. If we synthesise a lot we would surely find certain coincidences. An occurrence, an event, a story, truth and/or reality, context… could well be some of the concepts that could appear in the background or in the form.

I am one of those who think that journalism today is in its worst moments, or at least is in a process of upward degradation and with no short-term improvement in sight. The constant fight for attention in the cheap click market of social networks has added one more point of junk to the profession.

If news has always been out of date in a heartbeat, you know what it’s like to wrap fish in the day’s newspapers. Today, news no longer lasts half a day, it rots in the blink of an eye.

With this absurd speed at which any possible rectification dies buried, there is no time for reflection, much less for calm professional introspection.

You have to keep generating a hundred or two hundred pieces a day because the machine doesn’t stop and the competition grows and eats your toast. We have to give more food to that flabby and ambiguous mass we call “public opinion”, always insatiable for anecdotes.

Metaphors, euphemisms, subterfuges, absurd questions, minimal anecdotes maximised to elevate them to matters of state, statements with stilted conditionals, declarations with no more substance than the personal opinion of the person issuing them and hoaxes, all covered in a thick and axophysiating layer of manipulation to satisfy the ideology of each side. Those Nazis with their crazy arms up in the air

With the different groups of Nazis and other fascist subspecies that have been braying these days in the streets of different localities, we have found another clear example of this degradation in reporting, which involves rewriting the meaning of words by adding definitions that are as creative as they are trashy.

COPE called Nazis “demonstrators” who make the fascist salute. La Razón took a risky gamble and described them as “violent demonstrators”. Telecinco baptised them as a far-right group that was handing out “democratic soap”, and for Antena 3 they were “people who were protesting”. TeleMadrid refers to the “reproachers” as “strangers”, but they play their cards close to their chest and in the piece they describe them as fascists. For El Español they were “radicals”.

In 20 Minutos they were a far-right group and in La Información they speak of “five men” who gave a fascist salute. For La Voz de Galicia they were also “men” shouting. In EFE they were also “five people with far-right aesthetics”. The agency, which already smelled something Nazi in the clothing and gestures, was not clear either, and at the last minute could not find the correct definition.

And you can keep looking for similar headlines, because there are (and there will be) many more.

But, of course, you can’t call someone a Nazi if you don’t catch him in the act of burning Jews. That’s as far as we can go! (?)

It doesn’t matter if there are five or fifty of them, the style book is always the same. In the case of the Franquistas they will be described with an affectionate and romantic “nostalgics“. Or the very laughable “defenders of the unity of Spain”.

Nazis have even been called “voters”. This is not entirely wrong, although it is highly improbable that anyone would have enough brains to know how to put a piece of paper in a box, but the correct thing to do would have been the disturbingly precise “voting Nazis“, which also sounds like the name of a modern, transgressive musical band.

And the closing minute sums up Antena 3’s rubbish to perfection.If they do this with a live translation, imagine what they can do with what they edit.

The owners of fear