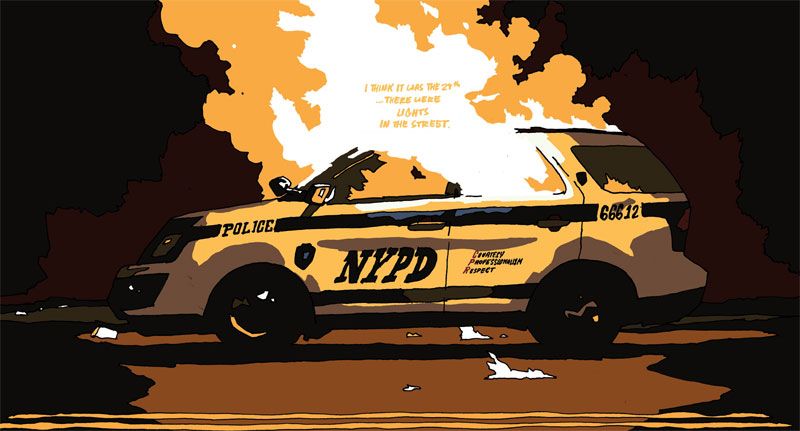 Things are looking bad for cartoons in the USA and even more so with the racial movements on the boil.

The cartoonist Ronald Wimberly finished his comic page and sent it to the newspaper. It was to be published this Sunday in the series The Diary Project in the Art section of the New York Times. The page was rejected because of this cartoon of the burning police car and he was asked to remove it. The cartoonist refused to have the page mutilated, and the chose to publish it in full on his Patreon page. He also publishes it The Nib.

The author told the story:

“I found out that they threw away my comic. (…) The editor told me that, after much deliberation, after a rigorous discussion that went all the way to the top of the publishing house, the central image of the burning police car was too much. … something about ‘editorialising violence'”. They couldn’t run it anywhere in the whole paper. I was told I could remove the central image from the comic and they could publish it, but I decided not to do that and publish it online.

The editor was very nice and they seemed to go out of their way for me, but what do you want? It’s The New York Times. They offered me the first place in the next series. I’ll draw something less “provocative”.

This is just one more passage of which we are aware because the author decides it’s important to make it public, but I’m sure there are many other partial or complete snipes in the bag that are not counted. The NYT removed the political vignettes from its international edition on 1 July 2019.

Humour in trouble, a compilation of cases (III)
Cases of cartoonists who have had problems of some importance because of their cartoons or satirical illustrations. There are also some stories of other people who, without being cartoonists, have got into trouble for sharing them.