Kishore was arrested in May after his “Life in the Time of Corona” cartoons satirizing the country’s response to COVID-19 were posted on Facebook in March and April 2020, for which he has been in jail for just over seven months. He was charged under the Digital Security Act of 2018 for disseminating false information and misinformation about the country’s response to COVID-19.

“Criticism of government policy, including through political satire and cartoons, is permitted by the rights to freedom of expression and cultural rights, and should not be criminalized,” the statement from the Office of the High Commissioner for Human Rights said. 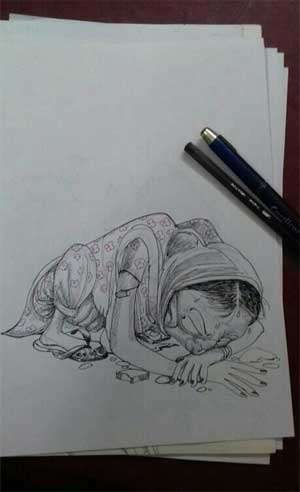 In the text they also recall that they have repeatedly expressed serious concerns about the incompatibility of digital security law with international law and its use to silence critical voices.

In court hearings held virtually, Mr Kishore’s requests for bail have been denied up to five times and no date has been set for trial. Mr Kishore is at increased risk of complications from COVID-19 as he is an insulin-dependent diabetic.

“Around the world, outbreaks of COVID-19 in prisons increase the risk of harm or death to people with underlying health conditions such as diabetes, hypertension and chronic respiratory conditions,” experts say.

“The Bangladeshi authorities have released thousands of people because of the threat posed by COVID-19 in the prisons, and there seems to be no legitimate reason to reject Mr Kishore’s request for bail,” they add. “We urge Bangladesh to release Mr. Kishore on humanitarian grounds to avoid further deterioration of his health”.

In addition to requesting the immediate release of Mr. Kishore, the experts called on the authorities to drop the criminal charges against him in light of Bangladesh’s obligations under international human rights law.

Earlier this year, Cartoonists Rights Network International presented Kishore with the Robert Russell Courage in Cartooning Award in recognition of his social commitment and defence of human rights.

“During the pandemic, it is more vital than ever to respect the rights of artists like Ahmed Kabir Kishore to express dissenting opinions,” the experts said. “These rights are not only guaranteed internationally, but play a vital role in promoting critical political debates.

“Silencing their voices harms their human rights and also puts everyone at greater risk”.

This is not about football