In early June Morristown High School mounted its art and design exhibition of student work, the theme of this year’s art class was “America Takes a selfie“.

Liam Shea’s five-foot-tall drawing was withdrawn and the student was informed that it would not be part of the exhibition. 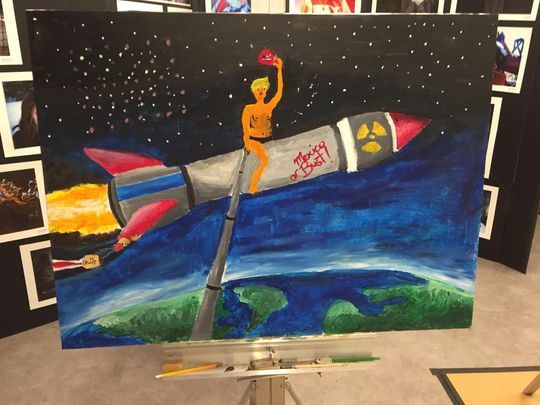 ‘…I appreciate the risk he took, it’s all very well, but other people weren’t too happy with it’.”

Liam’s mother, Kelly Zeiss Shea, who works for an architectural firm, said she was disappointed and upset that the school had caved in to the complaints.

Overwhelmed by the support for Liam’s drawing. I was disappointed that the school decided to remove both pieces, though. Liam accepted the controversy. He does not reject the decision and has the utmost respect for the principal and all the teachers. He has no intention of demanding that it be returned to the exhibition or of causing any problems for the school.
The reason I made the image public is because it deserves to be seen. Art should provoke; and it did just that. I have always been immensely proud of my two children. This is just one more reason.

The young author, as well as being a supporter of the debate on satire, said:

“At least a dozen people told me to make T-shirts, maybe that could pay my tuition.”

From the internet to the media

Morristown is a Morris County town of just 19,000 people. Without the amplifying noise of social media, this story might never have crossed the borders of this small town, but the controversy of school censorship, after passing through various digital media, ended up landing in print. On Sunday 18 June it appeared on the front page of the Daily Record newspaper in New Jersey. 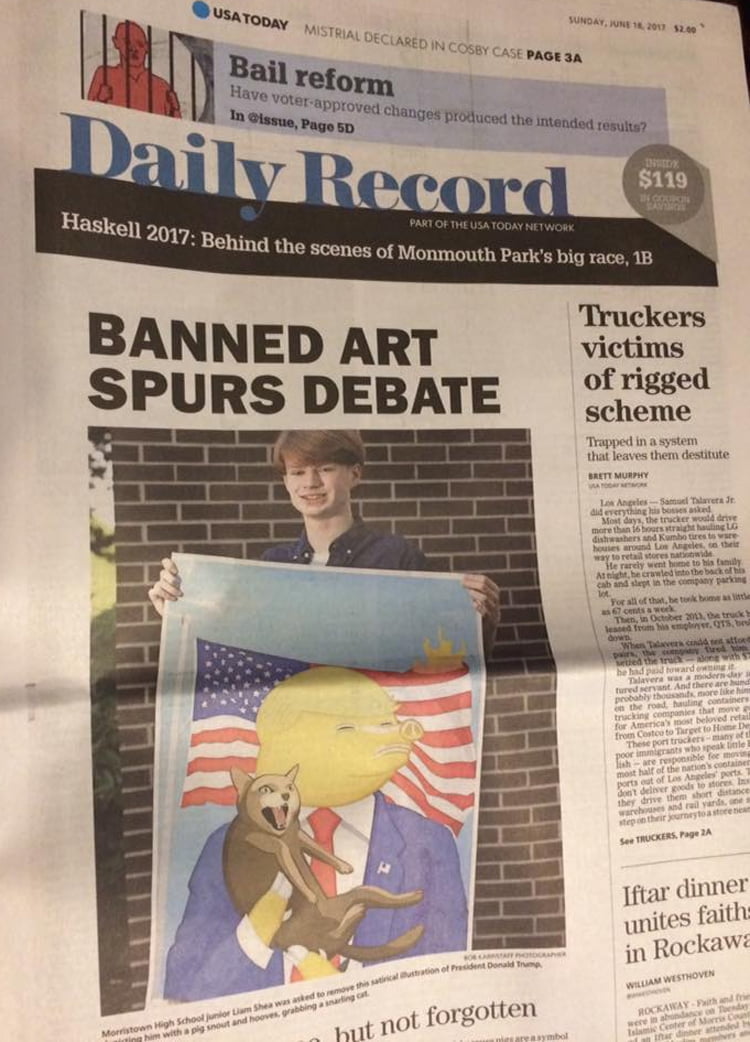 According to the family, due to popular demand, they have decided to trademark the image “American Catastrophe“, which is already for sale on T-shirts and other media, and that they will use the proceeds from the sale of these products to pay for Liam’s future education costs.

It is also paradoxical that, quite possibly, the people who forced the removal of the piggy painting are Trump supporters, or at least supporters of the message they have been repeating over and over again: that one of the great evils of modern society is political polychorretism.

Regardless of whether the image becomes more or less popular, something that would remain anecdotal, I am happy to see that there are still people who consider it important to encourage a critical spirit in students, even more so when it comes to art.