And the 2021 Pulitzer Prize for Editorial Cartooning for work published in 2020 goes to…. 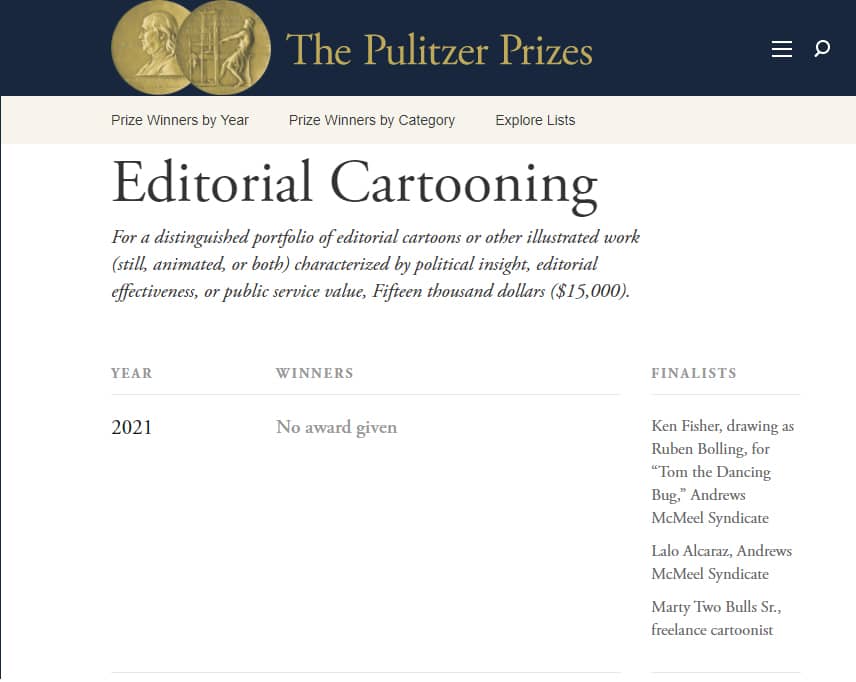 “No prize has been awarded”.

When the first Pulitzer Prizes were awarded in 1917, there was no editorial cartoon category. That honour began to be awarded in 1922, making this the 99th year since the first one was given to Rollin Kirby for his “Road to Moscow” series, Kirby would win it again in 1925 and 1929.

Although not every year an award was given in this category, from 1974 to 2020 it had been given without fail every year. Here is the list of award winners since 1922. The original rules explained the merits required to receive it:

“For a distinguished example of a cartoonist’s work published in an American newspaper during the year, the determining qualities being that the cartoon embodies an idea which is clearly manifested, shows good drawing and striking pictorial effect, and is intended to be useful to some commendable cause of public importance, with due regard to the total volume of the artist’s newspaper work during the year.”

The AAEC published this statement:

“The Association of American Editorial Cartoonists strongly disagrees with the Pulitzer Board’s decision not to award the Pulitzer Prize for Editorial Cartooning in 2021. We are baffled by the rejection of the talented finalists, as well as the many other artists who have been creating powerful work in these most turbulent and challenging times. The medium of editorial cartooning has been evolving for many years, but the Pulitzer board remains extremely traditional and narrow-minded in its tastes, seemingly uncomfortable with contemporary trends in opinion cartooning and comic art. Last year, the board discarded jury elections and selected its own winner; this year represents a new low point in this trend of insularity and institutional arrogance.

Notably, the three finalists chosen for 2021 were of Jewish, Latino and Native American origin, but this is the first time in 48 years that the jury has decided not to award a prize. No woman has won in twenty years, and there has only been one female finalist during those two decades.

Given that this has been a tremendously difficult time financially for our profession, the AAEC would like to request a refund of entry fees for those who applied. We also call for a radical structural reform of the award to evaluate modern opinion cartoons by 21st century standards.

16 June 2021. Three of the most important syndicates have issued a statement on the Pulitzer Board’s decision:

“Andrews McMeel Syndication, King Features and Creators Syndicate disagree with the Pulitzer Prize Committee’s decision to decline to nominate a winner in the Editorial Cartoon category after citing three finalists who were shortlisted for the award. We support finalists Ken Fisher (Ruben Bolling), Lalo Alcaraz and Marty Two Bulls and all the other editorial cartoonists who brought world events to life in 2020.

The Pulitzer Prize for Editorial Cartooning is the highest award that cartoonists in the field can receive. By deciding not to name a winner, the Committee fails to recognise the hard work of so many editorial cartoonists, particularly the work of cartoonists from underrepresented backgrounds, in a year of tremendous social and political change. This decision diminishes the prestige of the award and is disrespectful to cartoonists working in this field. We believe that the editorial cartoon is a vital part of political journalism, and we will continue to support our creators and the work they do in these difficult times.

The slow and eternal agony of cartoons in traditional media