Nadím as seen by Fran Cornejo

Nadím is a Colombian cartoonist born in Barranquilla (Colombia) in October 1976. He studied advertising at the Jorge Tadeo Lozano University in Bogotá.

As an illustrator and publicist he has worked with important publishing houses and advertising agencies and lately he has dedicated himself to opinion cartoons from the newspaper El Espectador and the pages of El Heraldo, a newspaper of his native Barranquilla.

First question due to the subject of the magazine Have you ever had any “junk” work, and if so, can you tell us what it was?

Of course I have, I have drawn (and on more than one occasion) cartoons with a scatological content and message. Driven more by my passions and indignation than by the invisible codes of the “good editorial cartoonist“.

The last time it happened to me was precisely yesterday, 29 February, when, fed up with the warlike and sulphuric behaviour of the “political” party of the former Colombian president Álvaro Uribe Vélez, the self-styled (or self-demonised?) “Democratic Centre”: 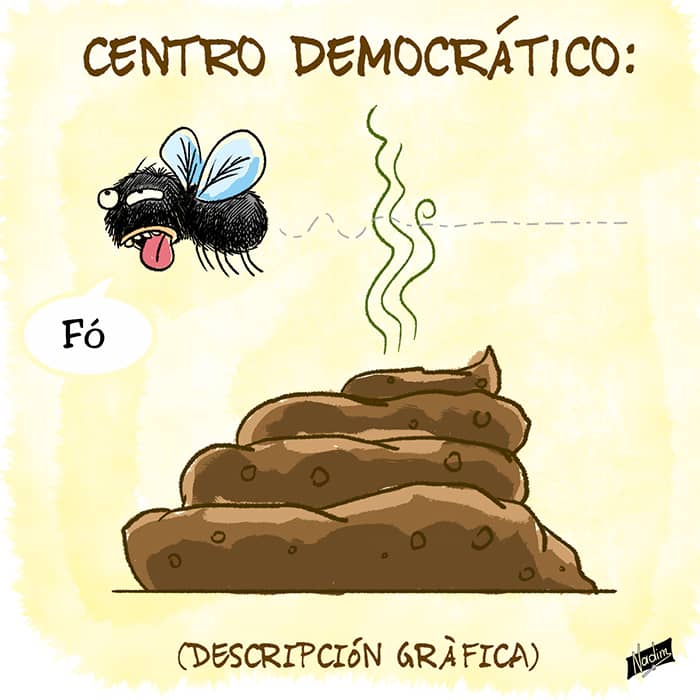 Emmm…Nadím, here we call a job that is very badly paid, precarious, deceitful, with exploitation beyond legal and moral limits, etc…

Of course you do, of course you do. What’s more, I think that “junk work”, understood in this way, MUST be part of the training and learning process of the illustrator, cartoonist, designer, cartoonist and/or caricaturist… but ideally it shouldn’t be on many occasions (hopefully only one). The profession must be respected.

One such situation that I remember, as if it were yesterday, was the illustrations I did for a road safety campaign when I was just 15 years old, at that time I was paid 60,000 Colombian pesos for that work, I felt like the master of the world with (what I thought) was an astronomical amount of money.

Years later I found out that the person who subcontracted me for that assignment had been paid more than two million Colombian pesos. As we say in Colombia: I definitely “paid the primiparada”.

Since when have you been drawing professionally? (Defining “professionally” as the only way to make a living from it)

I would say since about 15 years ago when I was, with one of my cartoons, the cover of the magazine of the National Association of Advertisers of Colombia. Since then I have had the privilege and the immense pleasure of “living” from what I love to do so much: drawing.

Are you still working in advertising? If so, what have been your latest works in this field?

One of the advantages of having studied Advertising as a degree is that I have learnt, thanks to the knowledge acquired in that degree, to promote, disseminate, promote and exhibit my work as an editorial cartoonist. I am an artist, of that I have no doubt, but I am also a strategist, a conscientious of how much the work costs according to the commission requested and a promoter of my work. So yes, I definitely exercise advertising in my day-to-day life around my drawings.

However, when it comes to contributing my drawings to advertising, social and other campaigns for advertising agencies, I have done so and, fortunately, with very good results.

What have these two nominations meant for you? (One and two)

Enormous satisfaction and joy, a sign that I’m doing things right and that I’ve chosen the right profession.

Unfortunately I didn’t win, but fortunately the nomination alone has been a fuel to persevere, to become better and better professionally and as a person. It feels good to know that one’s drawings and ideas are liked by the demanding juries of competitions where the work of the cartoonist is recognised.

You have a very active presence on Twitter. Do you think that such a continuous flow of opinion “noise” can make you lose your real perspective, influence or alter the perception of the events you intend to draw about?

Not as active (or of the quality) as I would like. I think that social networks like Twitter allow one to express all kinds of opinions on all kinds of subjects.

And yes, I’ve also thought that “if I tweet everything that comes to mind, I’m going to run out of ideas and then what am I going to draw?” but it’s also true that creativity must also be exercised, favouring the generation of ideas and ensuring that they never run out.

Something very important to bear in mind is that what you read (and even write) on Twitter is not the “unvarnished truth”. One should always try to do research, use official sources and assume with maturity the informative task that we have as editorial cartoonists. We cannot fall into the error of being inaccurate or superficial when we are around the news.

In the cartoons in El Heraldo I see that social issues predominate, both in Turcios’ cartoons and in yours. What do you think are the preferred subjects of editorial cartoonists? Do they let themselves be carried away by the “current affairs” set by the media or do they open up new subjects?

Many people think that our work is limited to political cartoons, but this is not really the case. We editorial cartoonists can (and sometimes must) report on all kinds of events, and yes, sometimes it is society that engages in behaviour that must be exposed, criticised and, why not, sometimes exalted by the cartoonist in his or her work.

Although editorial cartoonists are not necessarily journalists, we do carry out journalistic tasks (we inform, generate opinion and sometimes debate), so our work is linked to current affairs and recent events.

Where do you feel more comfortable, in caricature and “white” humour or in political satire?

Honestly, I don’t care, the comfort in my work lies in doing what I love: drawing.

Do you consider any subject forbidden or particularly sensitive when it comes to dealing with it for the newspaper?

I have to admit that I self-censor myself when it comes to religious and football topics. I consider that to get involved in debates around those issues is to get involved in byzantine discussions that, as we all know, lead nowhere…really.

Do you think there is censorship, and if so, to what degree and by whom or what group?

What is the panorama of political cartoons in the Colombian media, and do cartoonists usually have problems?

There are many print and/or digital media permeated by the large economic and political groups in our country, and this can be seen in the content of their columns, reports, investigative pieces and, of course, cartoons.

The bias is tangible and more than evident in several media.

I personally have not had to deal with such obstacles and I enjoy absolute freedom and independence in the subjects I caricature.

But there is such a thing as “Who am I not allowed to mess with?

What news about Spain and Europe is reaching Colombia now?

Almost all of them, the world is now much smaller thanks to the internet and social networks. Just type the word “Spain” into our computers and immediately our screen is filled with information from this beautiful country as well as from anywhere else in the world.

(Just as I am answering this question, I hear the news of an earthquake of considerable magnitude in Indonesia… just imagine: Indonesia!)

Could you list the 5 satisfactions that your activity as a cartoonist has brought you?

1. Closeness to my readers.

2. The pleasure of meeting interesting people.

3. Sharing with those who see my work the way I see the world.

4. To travel to many places to show my work.

5. Doing what I love and getting paid for it.

If you had to point out some new emerging cartoonists in Colombia, who would you mention? 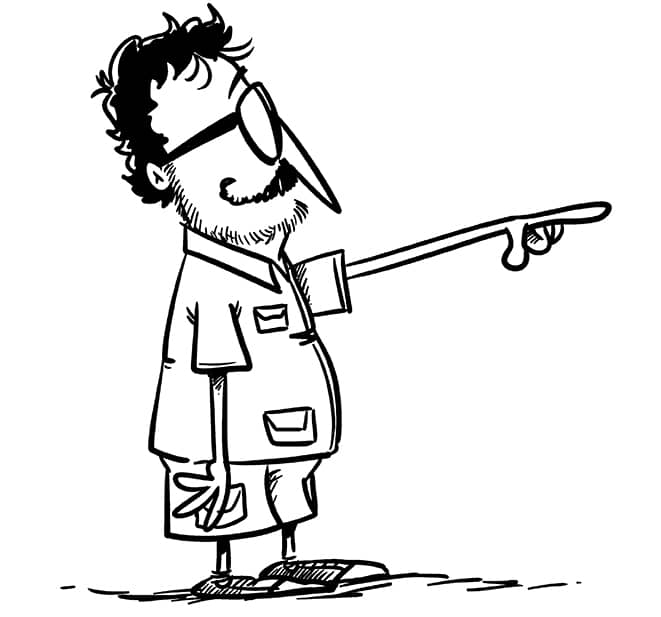 And if you could be reincarnated as an author (cartoonist), who would you choose to be?

Definitely him… there are many things I would like to amend and correct. Interview (2015) – Juarma López: “I don’t like cartoonists who are kind to the reader”