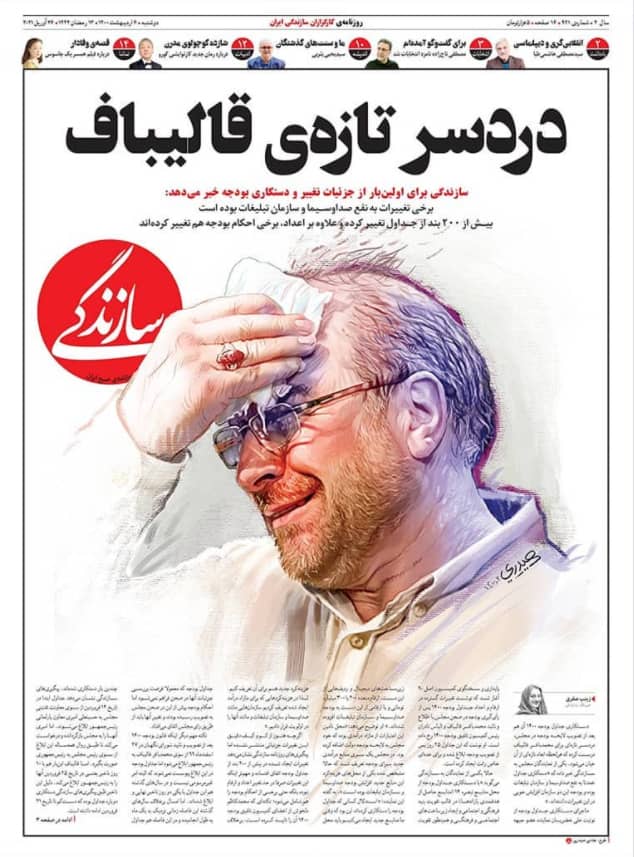 Illustration and part of the text that brought the authors to court.

Iranian cartoonist Hadi Heidari (Tehran, 1977) and three journalists from the daily Sazandegi have had to appear in court. They will have to face legal proceedings. In the case of the cartoonist, it would not be the first one nor the first time he ends up in prison for his ideas. The author of the illustration he told it like this on his social networks on 8 June.

“Over the years that I have been subpoenaed and questioned many times, I have never posted any news of these subpoenas. But this latest development is a funny story that I felt I had to share with you, my dear friends. Mr. Mohammad Baqer Qalibaf (Honourable Speaker of the Islamic Consultative Assembly) has sued me for insulting him for portraying him in an illustration that was published on 26 May this year in the Sazandegi N newspaper heading an article on budget manipulation This complaint has also been filed against Mr. Seyed Afzal Mousavi, managing director of the Sazandegi, Mohammad Quchani, editor, and Ms. Zeinab Safari, journalist. This morning, together with these loved ones and the esteemed lawyer, Mr. Ali Mojjathedzadeh, we arrived at Courtroom 2 of the court to hear the indictment. We are now free until the final decision is taken”

The Speaker of the Iranian Parliament, Mohammad Bagher Ghalibaf was so angry to see his portrait accompanying a critical text entitled “Ghalibaf’s new nuisance” in the local newspaper that he took the artist, the editor and two journalists to court. The portrait shows the politician, who appears to be crying, wiping the sweat from his forehead with a handkerchief.

The article focused on allegations of meddling in the budget planning process. It is presumed that this text is the real reason for the MP’s anger, although it is not ruled out that he was also annoyed by the image. In Iran, caricaturing any authority figures such as politicians, rulers and religious leaders is a high-risk activity.

The Iranian Journalists’ Association has been critical of the decision and has called on Qalibaf to withdraw the charges against the journalists as unfounded.

Hadi Heidari, from jail to jail

Heidari was arrested on 16 November 2015 at the Shahrvand newspaper by Iranian government agents. Sources at the time linked his detention to the publication of the from a cartoon welding ties with France over the Paris attacks of 13 November 2015.

According to ReutersSaleh Nikbakht, his lawyer, claimed that the cartoonist was detained because of a two-year pending conviction, also related to his cartoons. The same note said that, according to Tasnim agency, Haidari had contacted his family by phone to tell them that his imprisonment was the result of this conviction.

After spending just over five months in Evin prison, on 26 April 2016 he was released.

Haidari has been arrested and imprisoned before. In 2010 he spent two months in prison for “propaganda against the state”.

In 2012 he also had to visit the court and his newspaper, Shargh, was banned for cartoons critical of Iran’s leaders.

On the evening of 22 October 2009 he was arrested along with others participating in a religious ceremony in honour of political prisoners, which was being held at the home of Shehaboldin Tabatabai, one of the prisoners close to the reformist party. On that occasion he spent 17 days in prison for “collusion against national security”.