On 5 August, India blocked The Wire, again, blocked the internet and telephony, ordered tourists to leave Kashmir and made a massive deployment of soldiers.

Yet another move to abolish its independence that the government cynically sold as a measure against terrorism and to“ensure peace and tranquillity“. India has thus divided the state into two federal territories since 31 October.

Three months later, the situation has not improved. The authorities have turned the Jammu and Kashmir region into an information desert for the outside world, but also for local news. With the complete disappearance of the internet press, the work of cartoonists has also vanished. Some of them tell The Wire the consequences of the blockade. 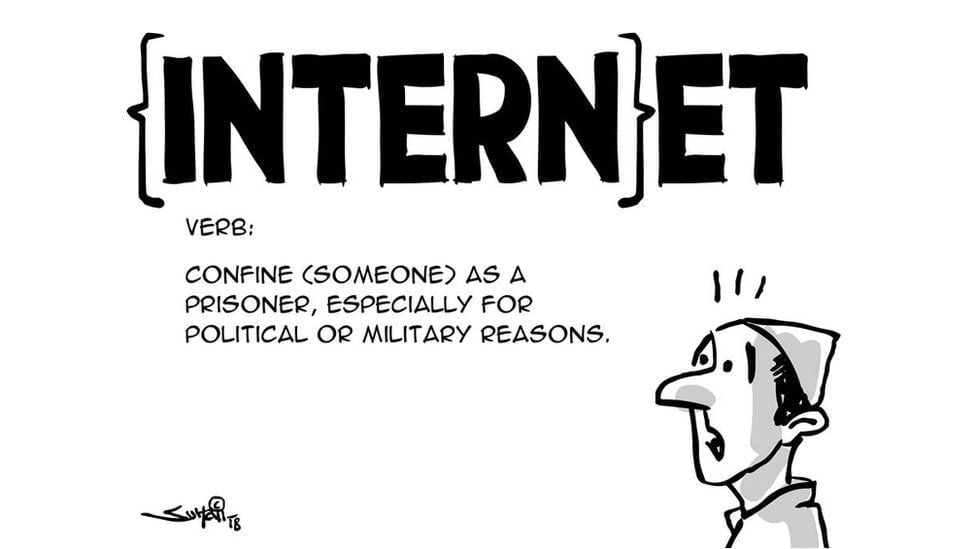 Cartoon by Suhail Naqshbandi (TW) censored by the media he worked for, curiously enough he spoke of the blocking of the Internet as a strategy of repression.

Naqshbandi, who resigned from his job in May due to pressure and censorship (see story and interview), has claimed that he has not been able to publish a single cartoon on the internet since the blockade began. Naqshbandi, who could not even access his email for more than a month due to the total internet blockade in the area, confessed that he felt like he was in prison.

“All my activity as a cartoonist has ceased since 5 August”. “This is the first time in my career that I have not been able to send any cartoon to my newspaper for more than two months”.

Tariq, who lives in south Kashmir, says a centre was set up in Srinagar to “facilitate” internet access for journalists and other newspaper staff. Many others were “unlucky” and no internet facility was provided for journalists based in other districts of the valley.

“The authorities did not even provide a media centre for journalists in the district so that we could send our work and access the internet for some time.” “The journalist community in our district made several requests to the district officials concerned, but no internet facility was provided to us. They prevented us from working.”

Another popular cartoonist from Kashmir, Bashir Ahmad Bashir, who signs as “BAB”, regularly shared his cartoons on his Facebook page before 5 August, since that day he has also not been able to do so again.

BAB, who publishes his critical political cartoons daily in the Urdu newspaper Srinagar Times, has managed to get them published in the paper. Not so on the internet.

The latest cartoon shared on his Facebook page is dated August 4, 2019, hours before all communication lines, including mobile and broadband internet, were shut down in the valley. The same as published in the latest digital edition. The image shows the entrance of the government tourism department with a plaque that reads: ‘Director (No) Tourism’.

India, blocking without regard

Just 10 days after the start of the communications blockade in Kashmir, the government announced that it would lift it “in a few days” and that normality would gradually return. This did not happen; suffice it to recall that in 2016 the internet blockade in Kashmir lasted more than four months. The region was already paralysed by the internet and telephone blockade. Shopkeepers reported serious supply problems. Pharmacies were beginning to run short of vital products, such as insulin and baby food, which they normally ordered online.

There were only a few “official” places from which calls could be made from landlines. Insufficient in number and location to be accessible from remote rural areas and where the queues were endless to talk for a few minutes. And obviously controlled and monitored.

But the restrictions imposed in the state of Jammu and Kashmir, home to more than 12.5 million people, were designed to curtail other fundamental rights no less important. Freedom of expression, but above all freedom of the press, is the main objective of this unilateral decision by the Indian government. In this way it has managed to make the region invisible.

Blocking communications is the usual strategy to prevent demonstrations from taking place. It also makes it impossible for any information critical of the government to be disseminated or get out.

In 2018, India blocked the internet 134 times, Pakistan 12 times. In the Jammu and Kashmir region, one of the most militarised in the world, Pakistan rules half of the area, China a small part, and India the other half. The three countries continue to dispute different territories.

Cartoonist Suhail Naqshbandi quits due to pressure and censorship