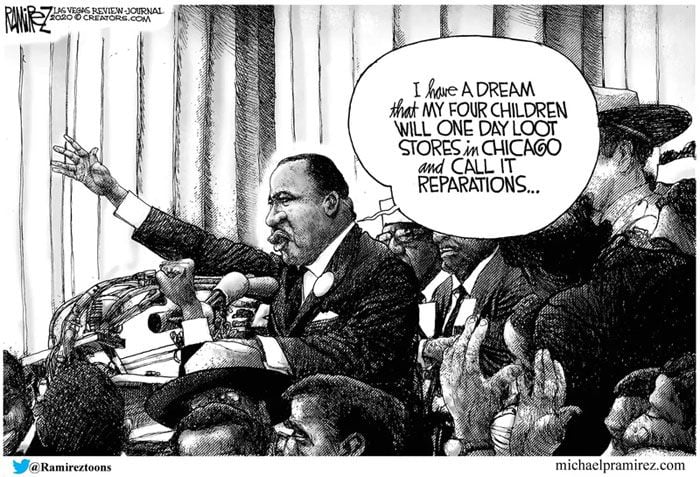 This cartoon by the conservative’s cartoonist Michael Ramirez, published on 16 August in the Southeast Missourian newspaper, provoked another episode of anger and accusations of racism against the medium.

In the image, Martin Luther King pronounces his famous phrase that the cartoonist changes to:

“I have a dream, that my four children will one day loot shops in Chicago and call it reparations”.

The cartoon also received comments against it on GoComics and two days later, Ramirez posted another cartoon about looting which also garnered some more criticism.

The newspaper published an editorial titled “A note to cartoon readers” in which they claim to have received complaints and even threats, discuss the selection process, ramble on about the more or less critical nature of the cartoons and close by talking about, well, whatever about the spectrum and such.

“Almost every day, there’s a cartoon that someone might be offended by. In fact, part of this current era seems to find offence in others, and cartoonists especially like to focus on hypocrisy. The management of the opinion page expects that we will continue to receive complaints in the future, as the paper continues to share cartoons from across the political spectrum”.