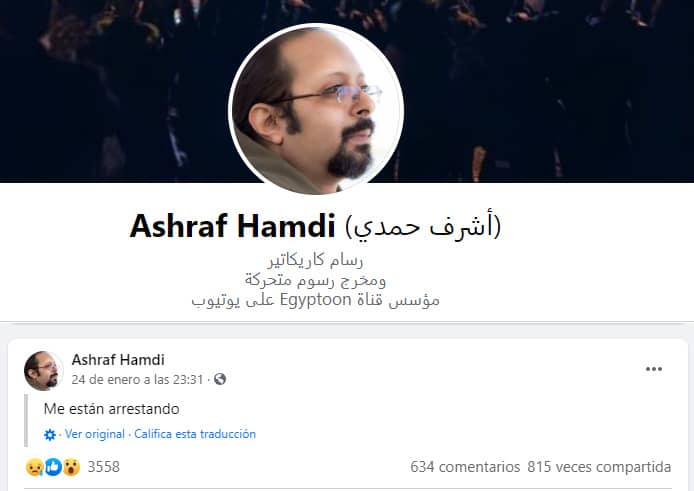 A month without news of Ashraf Hamdi.

This Egyptian cartoonist and animator was arrested on 24 January.

His crime: publishing an animation. The video pays tribute to the 2011 uprising on the tenth anniversary of the first mass demonstrations that toppled Hosni Mubarak.

“They are arresting me“

Local sources confirmed his arrest a few days later. From CRNI that more than a month after the publication of this message, they have not been able to find any official information related to the legal process or any information on the cartoonist’s personal and legal status or location.

The organisation further notes that no one has received an official explanation for his arrest and, as far as is known, no charges have been filed. This fits the pattern of arbitrary mass arrests in Egypt.

Hamdi, who made his name as a cartoonist in the press and was currently running his popular Youtube channel Egyptoon , was arrested on charges of “spreading false information and misusing social media” after reposting on Facebook an old animation honouring protesters on their tenth anniversary.

CRNI demands the immediate release of the cartoonist and an end to any prosecution against him.

Humour in trouble, compilation of cases (III)
Cases of cartoonists who have had problems of some importance because of their cartoons or satirical illustrations. There are also some stories of other people who, without being cartoonists, have got into trouble for sharing them.