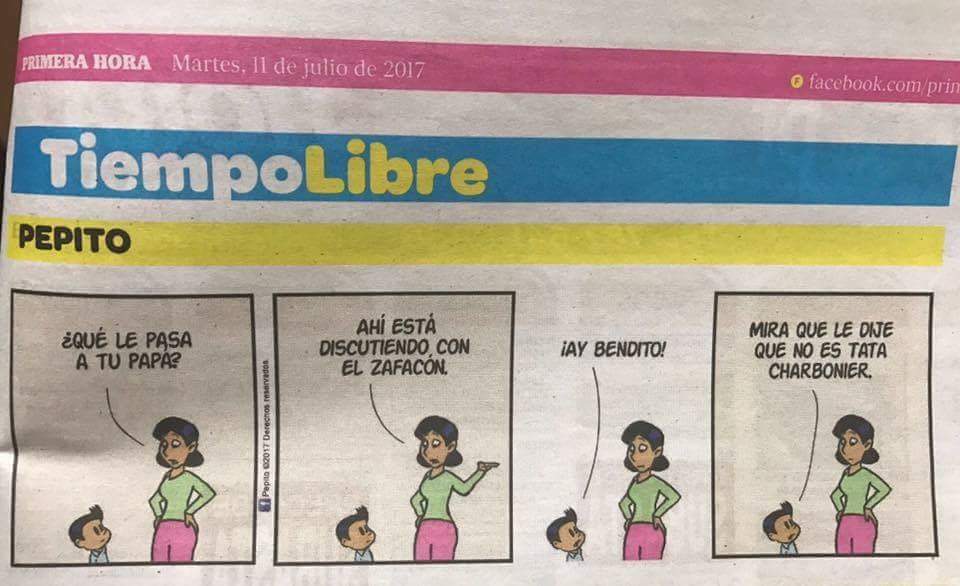 Pepito cartoon, reason for the cancellation of the series in Puerto Rico

On 11 July, the Puerto Rican daily Primera Hora published the cartoon strip of the series“Pepito” by Harold Jessurun and Aníbal Quiñones, as it had been doing for 10 years.

The trigger for the mess was the use of the word “zafacón” (bin), the child protagonist of the strip using it as an example of an inanimate object containing waste that cannot be discussed. A metaphor to allude to Charbonier’s retrograde ideas.

The pissed off people took it literally, did not want to see beyond the word “zafacón” and only understood that Charbonier was being called rubbish. That was all.

The next day, the president of the Puerto Rican House of Representatives sent a note to the newspaper asking for an apology“for publishing a cartoon that mocks a lady“. He also described the strip as“derogatory, insulting and discriminatory to Representative María Milagros Charbonier“. 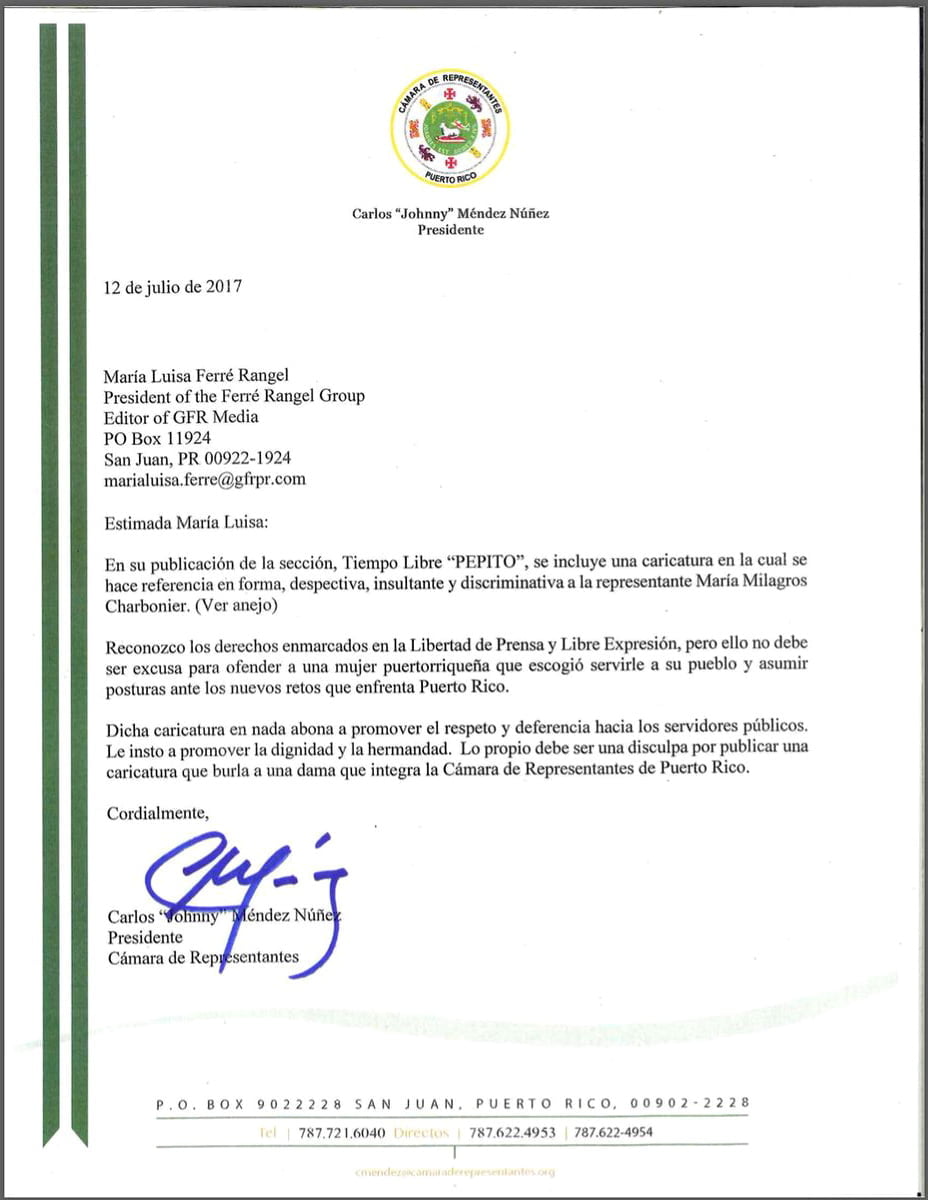 Letter from Méndez Núñez to GFR

Cancellation of the strip and firing of the authors

But what arrived the next day, apart from the apology, was a note in the newspaper informing of the cancellation of the Pepito strip and, by extension, the dismissal of its authors. In just 24 hours, the cartoonist and the scriptwriter were ventilated without much debate.

On the same day, the person alluded to in the strip gratefully accepted the apology and also the cancellation of the cartoonists’ contract, something he never objected to at any time. I bet he thought it was only fair. She expressed no objection, delighted with the dismissal.

She even talks about the character of a child as if it were a real child, all pretty crazy. 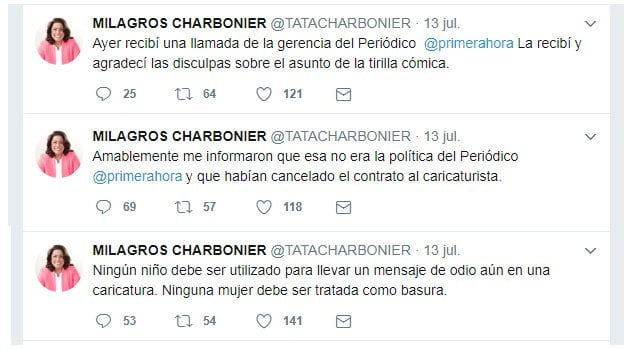 Charbonier is known for her anti-LGBTQ stance and for her efforts to impose religion on her political decisions, leading more than a few to point to her for supporting Catholic fundamentalists.

On 13 July, the authors published a lengthy statement (screenshot) on the character’s Facebook page with their position on what happened, among other things, showing their disagreement with the newspaper’s decision and speaking of pressure from state-related groups.

“We are not satisfied with the decision. Especially because we were not given the space to discuss what happened

. State-related pressure groups have campaigned to stop this project by accusing it of promoting violence against women. This accusation is a departure from the historical trajectory of active denunciation in favour of improving the living conditions of Puerto Rican women and safeguarding their rights.
Even so, on 16 July, they affirm (capture) that they do not intend their complaints to be understood as a call for a boycott.

Pepito is not calling for a boycott of Primera Hora

, we invite you to make your voice heard by demanding in-depth journalistic work and oversight, space for all kinds of voices in the newspaper and greater freedom for the arts.

Following the numerous criticisms that spoke of censorship due to political pressures, due to what happened during the two days after the publication of the strip, Charbonier washed his hands of the situation, blaming the dismissal of the authors of Pepito “on social networks”.

And perhaps he is partly right (about what is not seen) and it was the media that decided to punish the authors and impose a punishment of flagellation on itself.

But no matter how much they insist on denying political intervention, there are statements from which something very different can be deduced. Such as those of Lourdes Ramos on 12 July. 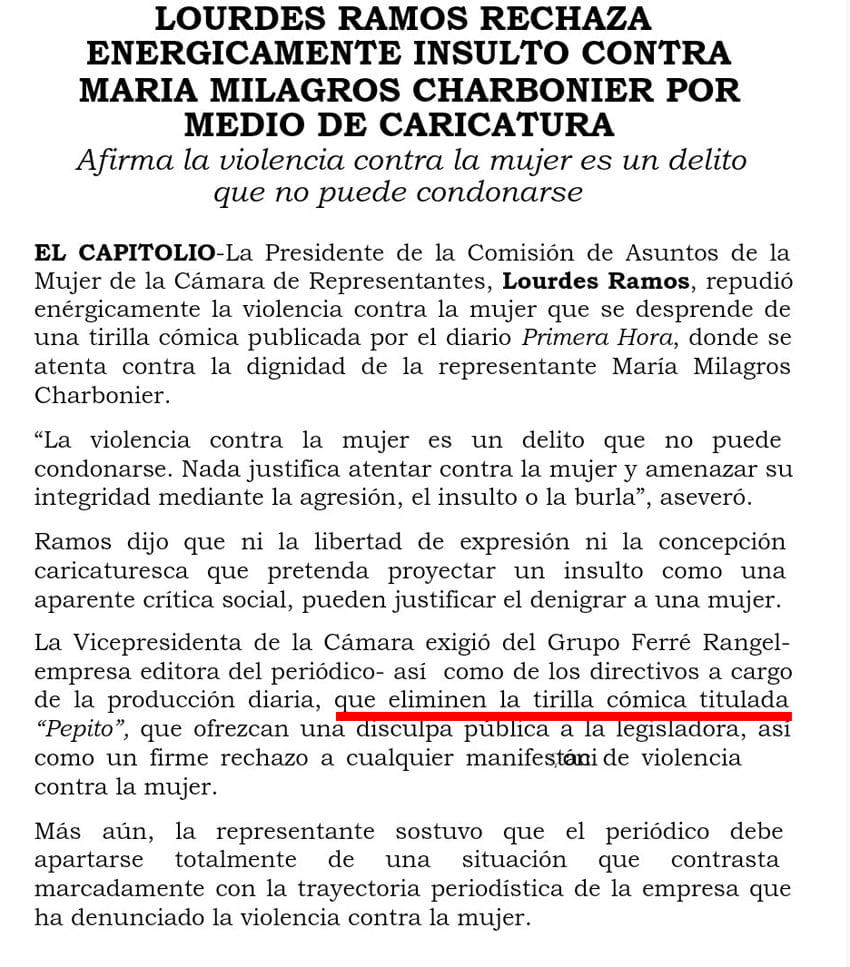 Be that as it may, what the politician cannot hide is that behind their reactions and movements one can sense the forms and objectives. In short, they read satire as an insult in order to criminalise it. It is not an innocent gesture.

In this way they give “legal” substance to their complaints. Without paying attention to the context and without accepting any analysis of intentionality, they strip the cartoons of their humorous, satirical or critical format.

In the end, the big loser, for a change, is freedom of expression.

from 13 July 2017
As the number of criticisms of the newspaper, pointing out that it had given in to political pressure, continued to grow, Primera Hora published on 17 July a note entitled “To our readers” (screenshot) in which it took the opportunity to accuse Harold Jessrurn of lying.

“Unfortunately, Mr. Jessurun has decided to take advantage of the situation, using false expressions. If we have so far stayed out of the controversy, it is precisely because we respect freedom of expression, as well as deference to the cartoonist, who was our collaborator for 10 years.

It is not true that at the time of terminating the contractual relationship political pressure was alluded to, simply because we did not have it and because it is not a factor that we take into consideration. We did talk about the offensive content of the strip – irrespective of its purpose – and the negative impact it had on the brand. That is the truth and Mr Jessurun knows it. To raise the banner of censorship on the basis of a lie is a low blow to those of us who are truly committed to freedom of expression.

And this was Jessurun and Quiñones’ response to the newspaper’s note:

“Clarification: It has not been said that the newspaper notified me of government pressure in any forum. As I was told, we have stated that the reason for the cancellation was that the spread affected the reputation of the paper. However, the official public letters and requests from officials, for example the press release from Lourdes Ramos and the letter to the paper from Johnny Mendez, make it clear how these officials felt about the paper. Whether they were influential in the decision is up to the discretion of the individual.

Again, we are grateful for the 10-year relationship and wish you success in future endeavours”.

What was your intention, the central idea of the strip, using the zafacón? Do you think it has been misunderstood?

The positions defended by Representative Charbonier are ideas of the past that have been discarded by modern civilisations. Prioritising religion over the state, attacking groups because of their sexual orientation, limiting children’s education to what a religion subscribes to, and hindering the development of economic and health sectors are ideas that are unfit for an advanced culture. It is obvious to use the sack as a metaphor, because it contains or contains what is discarded.

Did you ever think that such a strip could cause such a mess?

We thought that the strip could be censored by the newspaper, as has happened on other occasions. In those cases, we simply send another one and that’s it. But beyond that, we didn’t imagine everything that happened. Of all the things that are said about politicians, it is relatively “light”. Besides, we have the right to think and pass judgement on the performance of elected members. There is nothing wrong with criticism.

How and when did Primera Hora inform you about the cancellation of the Pepito strip and the end of your relationship with the newspaper?

The day after the strip was published, the Associate Editor informed us that, due to complaints and the irreparable damage the strip had caused to the paper, the management had taken the decision to cancel the contract.

What kind of working relationship did you have with the newspaper? Did you have any kind of contract?

It was a contract as a supplier. It had no expiry date.

In your book “Las tiras de Pepito” nº 1 of 2010, there is a note on the front cover saying that it includes strips censored by Primera Hora

That book contains the strips from the first year that Pepito published in Primera Hora. That year, as in all years, there were occasions when the media decided not to publish one or another strip, and those appear in the book.

What was the last Pepito cartoon to be published in Primera Hora?

The one about the soda can.

What groups, organisations, associations or colleagues have expressed their support for you?

Pepito has been published under the mandate of four presidents of two parties. With which one do you think you have had more pressure or problems?

We have never really felt pressure from the government until now. In fact, in the last administration the pressure we exerted was taken as an opportunity for collaboration. And it was probably the administration that we criticised the strongest.

What is your assessment of the health of free speech and press freedom in Puerto Rico today?

The economic crisis is stifling publishing on the island. The pressure to maintain commercial sponsorship (both public and private) finds its way into the editorial offices of magazines, newspapers, TV and radio programmes.

Many media outlets are also forced to replace experienced voices with kids just out of university, which makes it easier to control what is said. In addition, many media conglomerates are being created. What is said is in the hands of a few and that is always worrying. Even with the plurality of the internet, diverse voices need to be heard in a country’s commercial media.

Pepito, a bit of history

Harold Jessurun began drawing at the age of 8 when he published his first weekly comic strip for a newspaper on the island of Guam. Since then, his drawings have been published in major publications such as Time.

Aníbal joined the Pepito team as co-writer in 2011.

Aníbal Quiñones is an award-winning advertising professional. His first web comic strip, “Mi vida Adnormal”, was created to channel the frustrations that all creatives go through in advertising agencies. Aníbal currently works at a multinational advertising agency in San Juan.

The character, who is just over 10 years old, has already received several important awards. UNESCO Award, Best Illustration Award from the Association of Photojournalists of Puerto Rico, Best Book Latino Book Awards and two Cannes Lions in 2016, one silver in the Media category and one bronze in the Promotions category.

Curious story about how Pepito managed to “get out” of the paper to achieve changes in real life.

The authors have decided to continue on their own and have opened a new website in addition to the ones they already have on social networks. pepitocomics.com