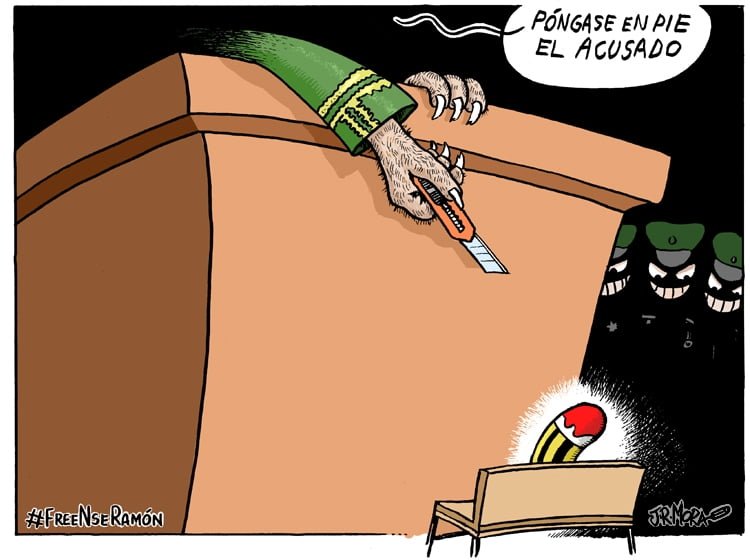 Translatitio: “The accused will please rise”

Esono is incarcerated in the Black Beach prison in Equatorial Guinea. He was arrested on 16 September 2017 and interrogated for his drawings critical of the government of Teodoro Obiang, although he ended up accused of money laundering and belonging to a money counterfeiting network.

Numerous human rights organisations and NGOs, as well as several artists’ collectives, consider the trial to be a farce and demand his acquittal.

Today, from several frontsthe ask for his release.

Here are 47 vignettes from the latest campaign that you can share.


Good news. From various sources it is confirmed that all charges have been dropped due to lack of evidence. According to activists, the statement of a policeman has been decisive.

Now the final piece of good news is missing, his release. The prosecution has dropped the charges and asked for the case to be dismissed. Now all that remains is for the judge to pass sentence.

Ramón should be released in a few days, possibly before the weekend.

Now we are closer to #FreeNseRamón

If nothing goes wrong he could be released today, Wednesday 7 March.

This has finally happened. Equatoguinean cartoonist and activist Ramon Esono is released from prison and says he is “on a thread of happiness and rage” (EFE Africa)

In a telephone conversation as he left prison, he told EFE that he is now heading to his sisters’ house to rest, but that “there are things that will not be forgotten in the long run”.

Today, 27 February 2018, took place in the Provincial Court of Malabo, the celebration of the oral and public trial of the Sumario nº 187/2017, prosecuted, Ramón NSÉ ESONO EBALE, whose crimes are: counterfeiting of coins and stamps of the state, coming from the Juzgado de Instrucción nº 1 of Malabo.
The hearing, which started two hours late and with no light in the courtroom, was presided over by the presiding magistrate, Sª D. Agustín CHICAMPO BARILA, accompanied by four magistrates, including three women (my congratulations on the 8th of March) and the notorious vacancy of the chair of the magistrate, Sª D. Martin OBIANG ONDO MBASOGO, dismissed and a refugee in Europe after the notorious international terrorist action of the 24th of December in which he is mentioned as a co-author.
The composition of the tribunal was as follows:
The Bureau of the Court
The Public Prosecutor’s Office
The lawyers for the defendant, Mr. Ramón NSÉ ESONO EBALE
And the prosecutor, the National Police Corporal attached to the Judicial Police Brigade based at the VICATANA police station, Mr. Trifonio NGUEMA OWONO ABANG.

After the formalities and the reading of Summary No. 187/2017 by the Clerk of the Court, the hearing commenced where the first to intervene was the public prosecutor to evacuate his provisional conclusions and said:

“1.-According to statements taken at the Court of Instruction No. 1 of Malabo, they reveal that, on 22 September 2017 the accused had been arrested in the vicinity of the ALY BABÁ Restaurant, opposite the Ministry of Health in the company of two friends, the reason for his arrest is due to the caricatures made to the authorities and finally, for the wad of one million francs (1,000,000) of counterfeit banknotes found in his possession (car).

2.The facts described above constitute the offence of counterfeiting State coins and stamps as provided for in articles 283, 284 and following of the Penal Code in force.

3.Ramón NSÉ ESONO EBALE is responsible as the perpetrator of the said offence.

4.As regards the circumstances modifying criminal liability, it is noted that the accused could have charged or known premeditation.

5.As for the imposition of the sentence, the Public Prosecutor’s Office reserves its position until the interrogation phase.

6.In terms of civil liability arising from the offence, once it has been proven, the accused will be obliged to compensate the State with a sum of twenty million francs (20,000,000) to be paid into the Public Treasury.

After the provisional qualifications had been made, the Public Prosecutor’s Office requested the opening of the oral and public trial.
The defence of Mr. Ramon NSÉ ESONO EBALE, composed of three lawyers (Dr. Ponciano MBOMIO NVO, Ms. Maria Jesus BIKENE OBIANG and Mr. Angel OBAMA OBIANG), took the floor and presented to the court table clarification on the subject matter of the trial and reiterated the proceedings presented on 9 October 2017 with the rigistro740/17 to hear the testimony of the prosecution witness and accuser Mr. Trifonio NGUEM OBIANG. Trifonio NGUEM OWONO ABANG, National Police attached to the Judicial Brigade and the diligence of confrontation between the accused and the accuser, a request dismissed in the pre-trial phase with the disappearance of the same in the Autos by the Instructing Judge ; What was the clarification?

The defendants of Mr. Ramon NSÉ ESONO EBALE asked the Court for clarification of the subject matter of the trial; was their client charged with the crime of counterfeiting State coins and stamps or was he being tried for money laundering as was reported in the national media?

The court, after clarifying the object of the trial and admitting the proceedings presented by the lawyers of the accused, moved on to the phase of the provisional qualifications of the defence of Mr. Ramón NSÉ ESONO EBALE.

The representation of Mr. Ramón NSÉ ESONO EBALE we say:

Trifonio NGUEMA OWONO ABANG could not prove to the Court how Ramon NSÉ ESONO EBALE was falsifying money and clung to the secrecy of his work after he accused NSÉ ESONO EBALE and he spent more than five months in one of the worst prisons in the world, Black Beach.

Trifonio NGUEMA OWONO ABANG was unable to give a single detail of the operation that ended with the arrest of three citizens on 22 September 2017, so much so that he told the public prosecutor that he could not remember the details of the operation because his mind was saturated with too many operations, yes, those of us who were there were stunned by the following conclusion, the deputy prosecutor of the Bioko Court, Professor Aurelio ESUBA, told him that he was not telling the truth after having sworn to tell the truth.
In the confrontation phase between the accuser and the accused, Trifonio NGUEMA OWONO ABANG broke down after hearing the loving yet harsh words of Ramon NSÉ ESONO EBALE:

“You are responsible for my having suffered so much, I don’t know you, I don’t hold a grudge, I know you carry out orders, now I can draw you.”

In the phase of the final qualifications, the Public Prosecutor’s Office asked for the follow-up of Case No. 187/2017 while the lawyers for the defence of Ramon asked for the immediate release of the Activist and Cartoonist Ramon ESÉ ESONO EBALE, the restitution of the damage caused, the reading of the acquittal sentence by the media that spread the infamous news, the destruction of the warehouse of the objects seized from the criminals in the police, which are being used to incriminate innocent citizens and the civil liability arising from the false accusation.

Ramon’s defence lawyers reflected aloud on actions such as that of Trifonio NGUEMA OWONO ABANG and we all, with a certain ease, found very recent parallels and said: “when you support, participate in, defend an injustice, do not forget that tomorrow you will be the one begging for justice and by then it will be too late.
It being past two o’clock in the afternoon on the island of Bioko, the Presiding Magistrate, Sª. D. Agustín CHICAPO BARILA decreed SUMMARY JUDGMENT No. 187/2017.