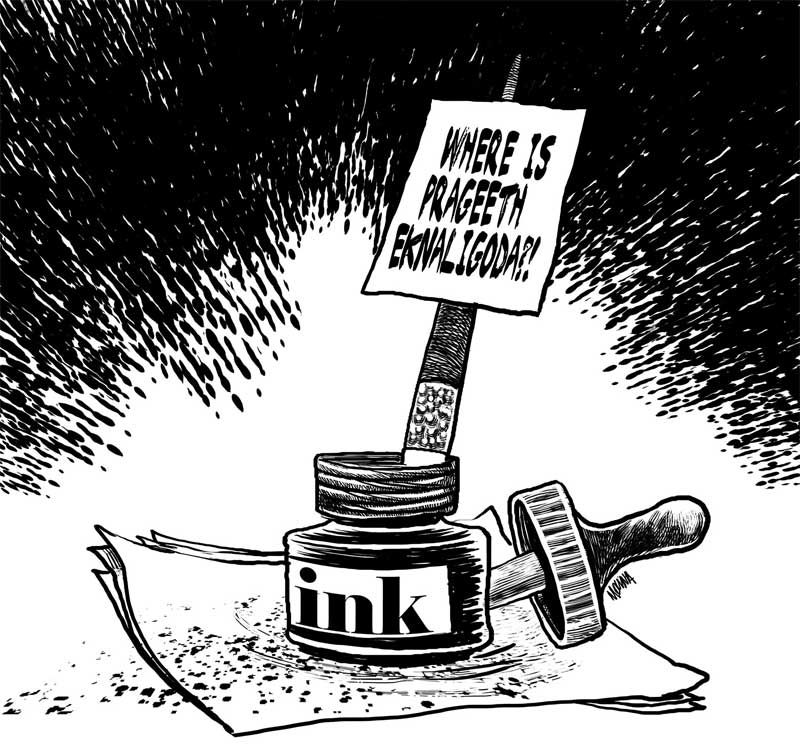 The night they disappeared Prageeth Eknaligoda

Prageeth Eknaligodaa cartoonist, political analyst and journalist, left his work in Colombo (Sri Lanka) on the night of 24 January 2010. He said he was going to meet an old friend before returning home. A friend called Prageeth’s mobile phone, only to hear a strange noise before the call was cut off. That was the latest that he heard from him. He was then 50 years old (1). It was two days before the presidential election in Sri Lanka.

After more than a decade of struggle by his family for justice, the trial began on 6 September to try to clarify the causes of the cartoonist’s disappearance and find the culprits. Everything points to the fact that he was kidnapped by the military, then tortured and murdered, and the perpetrators disposed of his body.

Sri Lanka’s Criminal Investigation Department (CID) investigation in 2019 led the attorney general to charge Lt Col Shammi Karunarathna, Prabodha Siriwardena and five others for the abduction of the cartoonist. It was revealed that Prageeth Eknaligoda was taken blindfolded to an army camp where he was interrogated. Records and recordings of calls and data obtained from the mobile phone repeater in the area confirmed that he was held at Girithale barracks and later transferred to Akkaraipattu.

This third witness was finally questioned on 29 September, during the session he said that his previous statement to the judge about the disappearance of Prageeth Eknaligoda was false.

It pitted Tamils against Sinhalese. The war left between 70,000 and 100,000 dead, some 250,000 Tamil refugees, as many others fled the island, and an unknown number of people, some estimates say 200,000, lost everything and/or suffered from starvation.

In 2009, some groups reported that the government continued to persecute all Tamils in Colombo on the grounds that they could be a threat to national security. Hence the rumours of the white vans.

To this day there is still talk of death squads and of assassinations, kidnappings, and of white vans in which dissidents and journalists are made to disappear.

Trial against cartoonist Ramón Esono, all charges dropped and released