That is what a Turkish court has found in condemning the authors of this cover.

Two cartoonists from the Turkish satirical magazine Penguen have been fined for a cartoon that has been interpreted as an insult to the Turkish president.

According to sources, a Turkish citizen named Cem Safcer filed a complaint with the Prime Minister’s office, arguing that the gesture of the “balled-up” hand (used as an insult) buttoning his jacket indicates that the person he is greeting is a homosexual.

Shortly afterwards, lawyers representing Erdogan entered the case, asking the court to punish the cartoonists for “insulting a public official”. 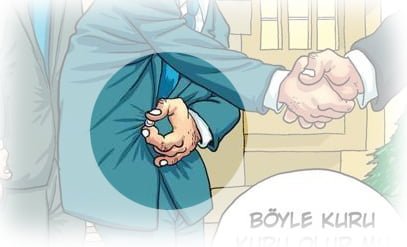 In Turkey, a Sunni-majority country where homosexuality is frowned upon, they are still trying to adapt to European law, but reports of homophobia are frequent.

The authors, Bahadir Baruter and Ozer Aydogan, were facing a jail sentence for this August 2014 Penguen cover drawing. They were eventually found guilty of insulting President Recep Tayyip Erdogan.

The cartoonists insisted during their statement that they had no intention of suggesting Erdogan’s homosexuality.

And finally the magazine’s response on its cover of 2 April 2015.

This is not the first time journalists, comedians or activists have been prosecuted in Turkey Erdogan has also a long history of complaints against magazines and cartoonists dating back to the early 2000s. Here are some examples: