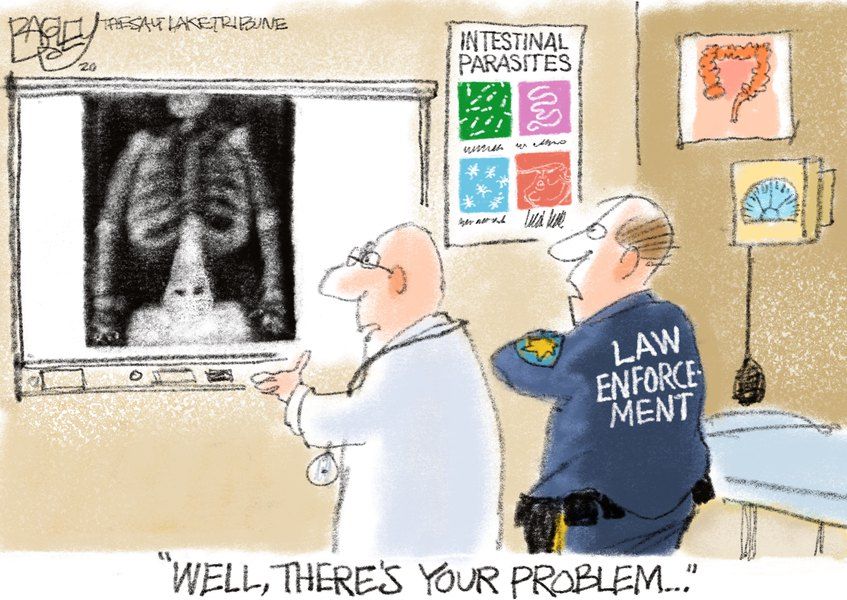 This cartoon by Pat Bagley published in The Salt Lake Tribune of Salt Lake City, Utah, has provoked complaints from the Utah Sheriffs’ Association, the Republican Party and other groups. They are calling for the image to be removed and for the newspaper and the cartoonist to retract and apologise.

In the doctor’s office, a doctor and a police officer look at an X-ray, a sign on the wall reads “Intestinal parasites”.

At the bottom of the skeleton is the figure in the white hooded robe typical of the Ku Klux Klan, which the doctor points to, saying:

“If you did not see Pat Bagley’s cartoon in the Salt Lake Tribune on September 1, 2020, consider yourself lucky. Unfortunately, many women and men in law enforcement (brown, white, black) did see his cartoon, which stands the proposition that “law enforcement officers are also Ku Klux Klan members.“. 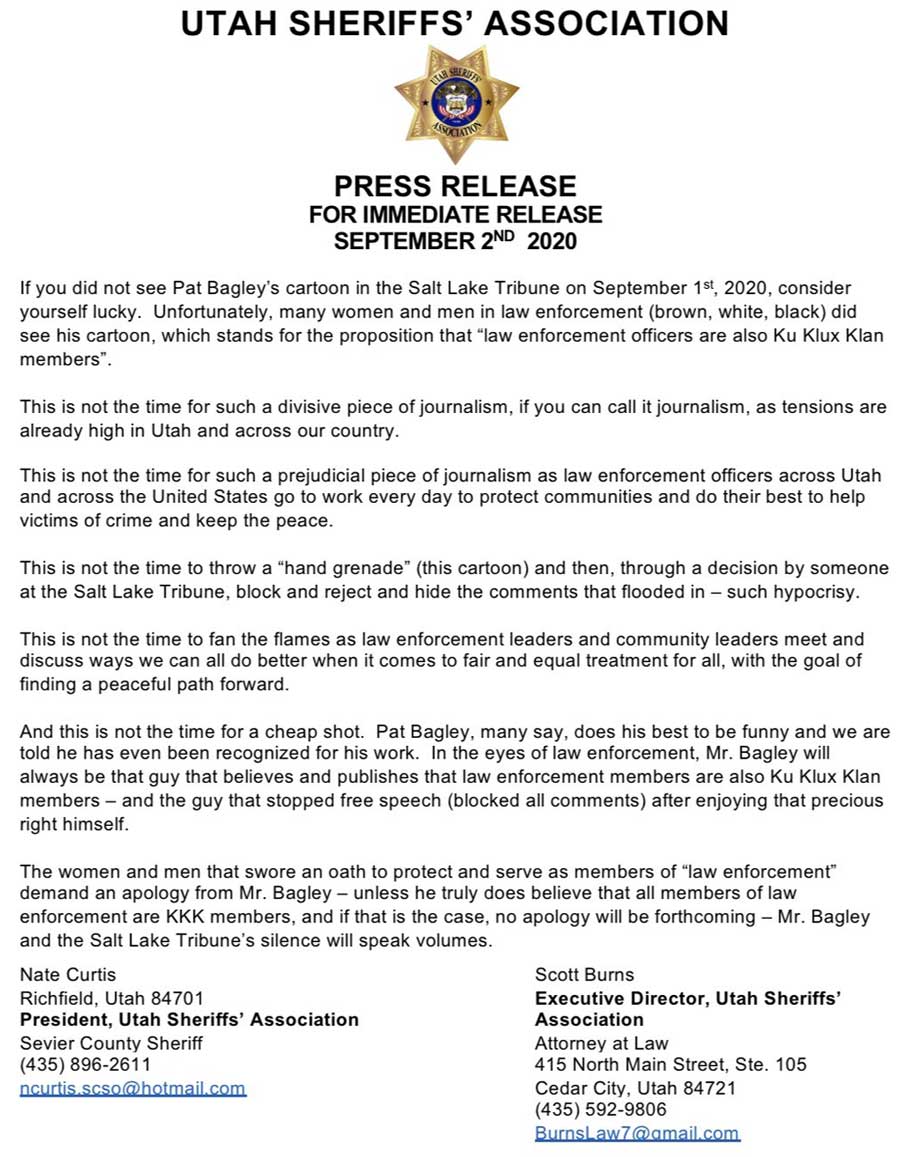 This association believes that:

They believe this is a cheap shot and are demanding an apology from Pat Bagley, complaining also that he is blocking their freedom of speech because he blocked the comments.

They believe the joke“fans the flames” and that“this is not the time to throw a hand grenade“, they add, referring to the cartoon. The sheriffs don’t seem very clever in their choice of metaphors if they need to compare a cartoon to a hand grenade and its consequences equal to or more serious than police violence resulting in death.

But the remarkable thing here is not the metaphors, it is that they fall into the most common error and grab the whole for a part, as the cartoonist made clear to him who insisted that it is a fact; there are white supremacists trying to infiltrate the police.

The Utah Republican Party and its congressman Chris Stewart also joined the party, saying the cartoon was “extremely dangerous and inappropriate and only fanned the flames of hatred and distrust”. Stewart said the newspaper and the cartoonist “should immediately retract and apologise“.

The congressman received the same reply from the cartoonist

“You know what’s dangerous? The police are irresponsible and a representative misinterprets the cartoon to rile people up. The policeman in the cartoon who is on a checkup, he felt something was wrong. White supremacists strive to infiltrate law enforcement. That’s a fact. That’s a problem.


The newspaper’s response: it is what it is

This time the media has not backed down and has no intention of apologising. The editor of the newspaper George Pyle took a firm stance and replied to the statement in an email to 2News.

“The cartoon did not intend to say, and in our opinion does not say, that all law enforcement officers are white supremacists. It does say that it is a problem that the law enforcement community must confront and address.”

George Pyle relied on a report a 2016 PBS public television network report describing concerns about racial bias in the police, which stated that the FBI warned of “white nationalists and skinheads infiltrating police to disrupt investigations against other members and recruit other supremacists since 2006”.

“He is clearly not satisfied with what he is seeing on the X-ray and, having seen it, he may well decide to take appropriate action. At least we can hope,” Pyle added.

Law enforcement advocates and other groups called a rally Thursday outside the West Valley City shared printing plant, where The Salt Lake Tribune is printed, to protest the cartoon. They are demanding an apology and the removal of the cartoon. I assume that in order to “take it down” they will also demand that the batteries be removed from the internet.

You know, those obtuse people who shout “I believe liberty is worth dying for ” in the middle of a pandemic. Funny way of handing out freedoms these people have.

Born in 1956, he has worked for The Salt Lake Tribune since 1978. He received the Torch of Freedom Award 2007 award from the American Civil Liberties Union of Utah and a recipient of the herblock Award in 2009, he was also 2014 finalist pulitzer Prize for editorial cartooning and was president of the Association of American Editorial Cartoonists AAECAssociation of American Editorial Cartoonists during 2018.