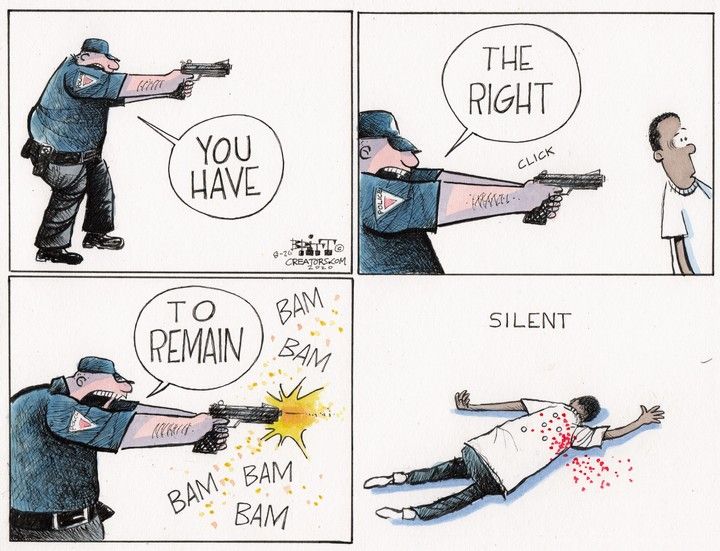 “You have the right to remain silent”.

From the Daily Gazette the cartoonist was supported. The editor of the newspaper Reed Miles, defended the publication of the cartoon:

“The Daily Gazette endorses the publication on 31 August of an editorial cartoon based on the shooting of Jacob Blake by a police officer in Kenosha, Wisconsin.

We regret that some readers were upset by the cartoon, but we believe it was a valid comment.

Communities across the country are having a moment of reckoning over racial injustice and many other related issues. The recent shootings in Wisconsin and, more importantly, the aftermath, are part of that reckoning.

It is not our goal to upset people or disparage good police officers or their supporters, but to reflect how some in our community feel.

First and foremost, the opinion page is just what its name suggests: an opinion page. We believe strongly in our commitment to publish a wide range of views on all kinds of issues, locally, nationally and internationally. This includes editorials, opinion columns, letters to the editor and political cartoons.

We have been criticised before for publishing cartoons with a more pro-police point of view.

We understand that the views expressed or the way they are expressed may be distasteful to some readers, but we do our best to give everyone a chance to have their say.”