Not all so-called aggressive advertising is bad. An example of advertising that some consider aggressive, but which pursues a good purpose, is that of traffic campaigns. But that doesn’t mean that they haven’t done some poor ones at some point.

But, of course, advertising something to raise awareness of a social problem is not the same as trying to sell a product that produces as much rejection as those who try to sell betting shops perfumed with cool stuff.

A good number of celebrities have become the image of different gambling companies, which spend large amounts of money on advertising.

The ad to which Carlos Sobera puts his face, is not only aggressive in its bad side, it is also annoying, strident, loud, old-fashioned, tacky and manipulative.

All those moods that the player goes through during the advertisement, which are presented as something exciting to experience, in many cases turn into false euphoria, anxiety, withdrawal, depression and so on.

On gambling addiction and bookmakers there is already a wealth of articles you can consult.

“Congratulations, today a hopeful path full of opportunities opens in front of you”.

In general I have little tolerance for advertising and even less so when it is served by bombardment until there is no medium left where those tawdry, screeching ads don’t appear two hundred times an hour.

That’s not to say that I don’t like advertising, I even took to watching the advertising marathons with the best of the festivals broadcast by Canal+, although it was a bit of a cheat as there are usually very few bad ones among those competing for an award. 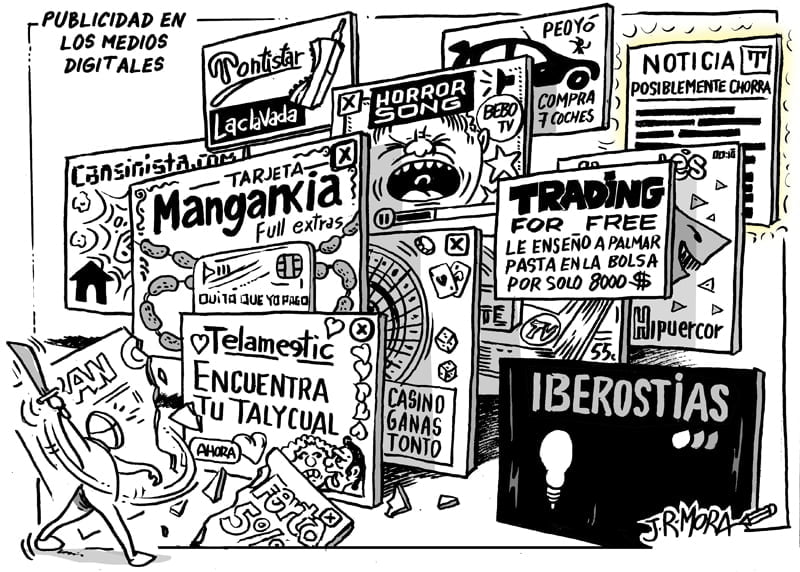 There was a time when I even filmed and edited commercials for a tele local cable. Many of them I even had to script them. I ended up doing commercials because almost everyone there did almost everything and since I was the one who drew and stuff, they attributed creative skills to me for advertising. Just like they would have called anyone who had a Cinexin in their childhood a film director. All in all, you tried to do as undignified a job as possible and often succeeded.

The thing is, I didn’t like filming those old-looking monstrosities 20 years ago. Now, these cheap, old-looking ads seem to want to come back disguised as a strange mixture of parody and nostalgia, in the style of the one that sells your car.

Nor did they manage to convince customers to do anything other than show their products, shouting their prices while appearing on huge billboards with the shop’s opening hours, address, telephone, fax number and later the address of their web site with hache tetepé and all.

One of the people I was able to convince to do something different, I proposed him to record a series of shorter spots. Something like chapters of a miniseries but self-conclusive. They would be much shorter, but all different. In terms of quantity, it would be more likely to take a lot longer for people to get tired of them than watching the same one repeated over and over again for months. Some would even run for years.

I got fed up of thinking up various ideas, some more amusing and crazy than others, and I even drew several storyboards. So as not to tire you with details, I’ll give you a preview of the outcome. I think that, although they didn’t say it, all the parties agreed that I was a buzzkill. Like all artists. It ended up recording another funny advert like the ones we’ve seen all our lives.