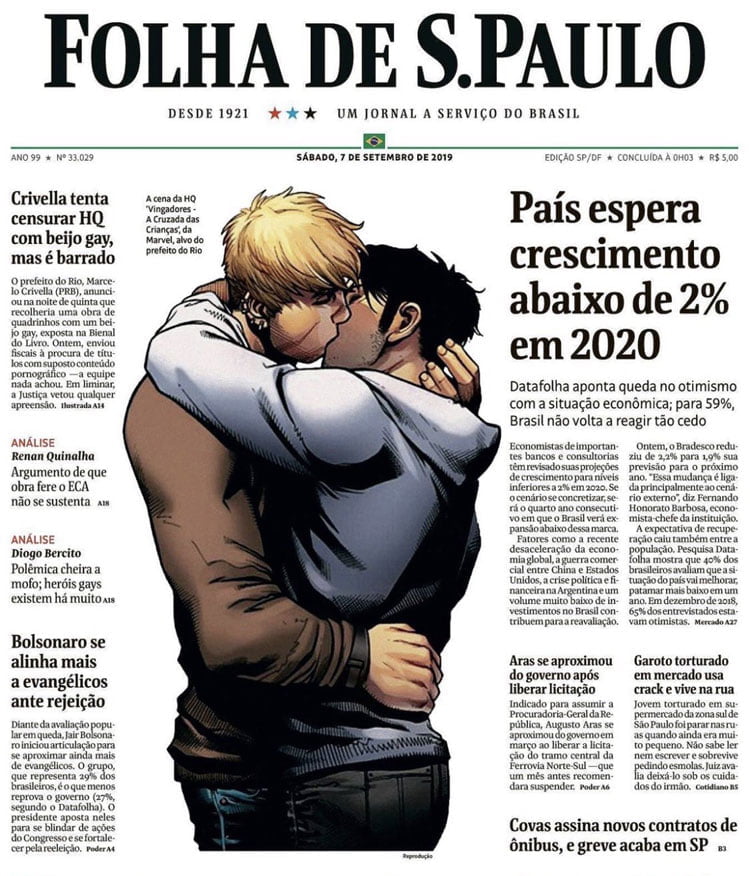 Brazil court row over kissing in a comic book

How could a cartoon from a superhero comic book end up on the front page of one of Brazil’s most widely circulated newspapers?

The mess revolves around a kiss between the sorcerer Wiccan and the warrior Hulkling, two characters from one of Marvel’s comic books, “Avengers, the children’s crusades”, which was on sale at the Rio de Janeiro International Book Biennial.

The mayor and evangelical pastor, Marcelo Crivella, outraged by the drawing of a gay kiss in the comic book, recorded a video in which he said the publication should be sealed in black packaging with a warning of “inappropriate” content for minors on the outside.

“Books like this need to be packaged in sealed black plastic. We need to protect our children. It is not right for them to have early access to matters that are not in keeping with their age.”

So on Thursday, Crivella decided that copies of the comic book should be removed and ordered an inspection by agents of the Public Order Secretariat (Seop) to also search for and remove other “inappropriate” content.

The inspectors searched the 150 stands at the exhibition but found no more copies. Immediately, the media and networks claimed that the mayor’s order had triggered a Streisand effect that had triggered massive sales of the comic, although others claim that copies had already been sold before Crivella decided to withdraw it.

A ruling, also issued on Friday, prohibited the authorities from confiscating any books based on their content, especially those with LGBT themes. However, a new decision however, a judicial ruling by the president of the Rio de Janeiro Court of Justice (TJRJ) authorised the Rio de Janeiro city council to confiscate from the Rio Biennial any books with LGBT content it deemed “inappropriate” for minors, thereby opening the floodgates to raw censorship, without subterfuge.

In his brief, the magistrate, Claudio de Mello Tavares, considered that a superhero comic book should not contain themes of sexuality. It should therefore be distributed with a content warning. Source

“As it is a superhero work, appealing to children and young people, which deals with the subject of homosexuality, parents should be duly alerted” before deciding “whether or not the text is appropriate to their vision of how to educate their children”.

The judge’s message is clear. Any kiss, as natural as any other gesture, between dressed heterosexual people is natural. Everything else must be covered up as “inappropriate”.

Nothing new. These are the usual postulates of the ultra-religious sectors installed in politics. They continue to hide their homophobia under the excuse of protecting children and young people.

The shepherd mayor of Rio de Janeiro remains entrenched and affirms that his is not homophobia or censorship, that it is “the law”, he says.

In Argentina, left-wing movements called for a “kiss-in”

on 12 September in front of the Brazilian embassy to protest against the attempted censorship of the comic
Finally, on Sunday came the resolution of this absurd judicial imbroglio, José Antono Dias Toffoli, president of Brazil’s Supreme Federal Court annulled the decision that allowed Crivella to send municipal prosecutors to tour the Book Biennial on the hunt for alleged “improper content”.

“The democratic regime presupposes an environment of free flow of ideas” Toffoli said.