The Brazilian PSL-SP deputy Marcio Tadeu, popularly known as“Colonel Tadeu“, went on a rampage against this Latuff cartoon to tear it down and smash it.

It happened on 19 November, during the inauguration of the exhibition “(Re)exist no Brasil: Trajetórias Negras Brasileiras“(Re)existir no Brasil: Trajetórias Negras Brasileiras), shown organised by the Chamber of Deputies that aims to offer a brief description of black resistance in the recent history of the country, as well as their contributions, achievements and demands. The exhibition coincides with Black Consciousness Day, which is celebrated on 20 November in commemoration of the murdered black slave leader Zumbi dos Palmares (1655/1695).

It is paradoxical that the raid takes place within the framework of activities for the fight against racial inequality and for an image that denounces violence.

The rogue MP smashing the cartoon.

But the punk also filmed himself and uploaded the video to Facebool to show the stunt on the internet.

MP, ex-cop and a violent man

Marcio “Colonel” Tadeu, an ex-military policeman and ultra-right-wing congressman from Bolsonaro’s party, broke one of the panels with a cartoon of Carlos Latuff. He also assured the media that has no regrets and that he would do it again to defend the “600,000 military police who were being accused, by means of an image, of being murderers”.

The cartoon is a criticism of the fact that the majority of victims of police violence are black. 75.4% of those killed in police interventions are black, according to 2019 data from Brazil’s Public Security Forum.

According to the cartoonistThe deputy’s attack on the exhibition proves that the cartoon was correct and that it was an attempt at censorship to “make the debate” on police violence against black people invisible. 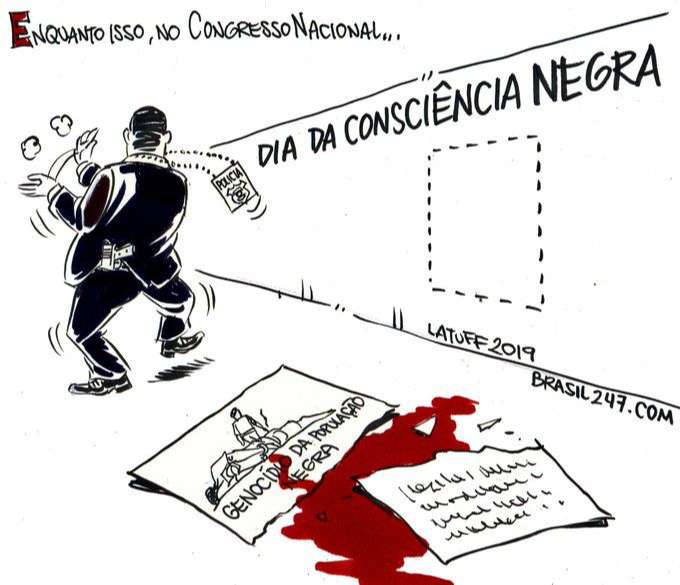 Latuff cartoon alluding to the attack by the rogue deputy

This is not the first time Latuff’s cartoons have provoked angry reactions. He even has his own blog blocked in Turkey.

In September, the day after the inauguration of the graphic humour exhibition “Laughter is risk: independence in danger“, installed at the entrance to the plenary hall of the Porto Alegre City Hall (Brazil), where Carlos Latuff also participated, was closed.

In an obvious act of censorship, councillor Monica Leal (PP), following a request by Valter Nagelstein (MDB), ordered the exhibition to be closed and all the cartoons to be removed.

A few days later, the Brazilian judiciary ordered the exhibition to reopen.

Brazilian court row over a kiss in a comic book