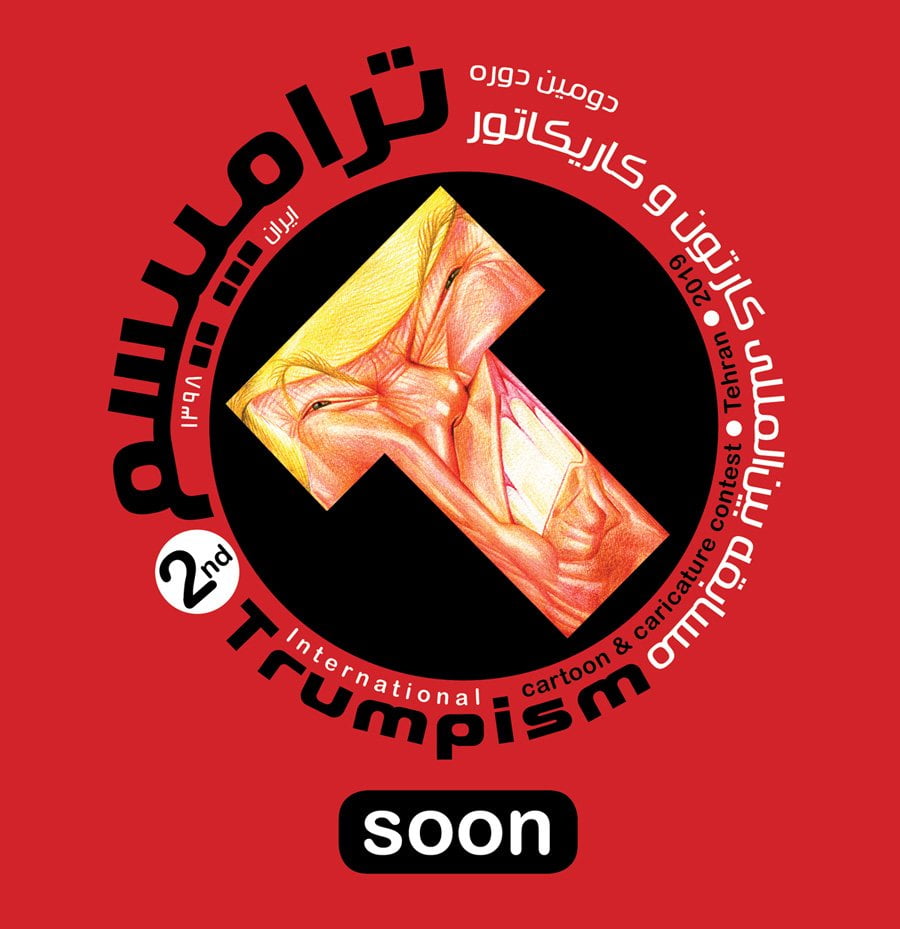 Poster for the second edition of “Trumpism” 2019. The cartoon is by cartoonist Shankar Pamarthi (India, 1968)

The second edition of the “Trumpism” cartoon competition has been launched in Iran and the poster has been presented at a press conference in Tehran. This year, 6,000 euros in prizes will be awarded.

The first edition of the International Trumpism Cartoon & Caricature Contest was held in 2017 and received some 1,600 cartoons from cartoonists from 76 countries. Prizes ranged from $500 to $1,500.

The authors were asked to draw about Donald Trump’s relationship with racism, immigration, the wall, the media, women and Twitter.

The poster already invited provocation by using a look with obvious graphic nods to Nazi aesthetics. The convenors do not hide the fact that “The ism in Trumpism is a reference to racism and Nazism“.

Poster of the first edition

Nothing to be shocked about What would vignetting be if it didn’t have its fair share of provocation?

In Spain, also in 2017, Trump was given a good waxing in a collective exhibition entitled ” Portraying Donald Trump” which hung at the 35th Barcelona International Comic Fair and was curated by Jaume Capdevila “Kap” in which cartoonists from all over the world doodled Trump in every possible way. Photoinfo: (1) – (2) 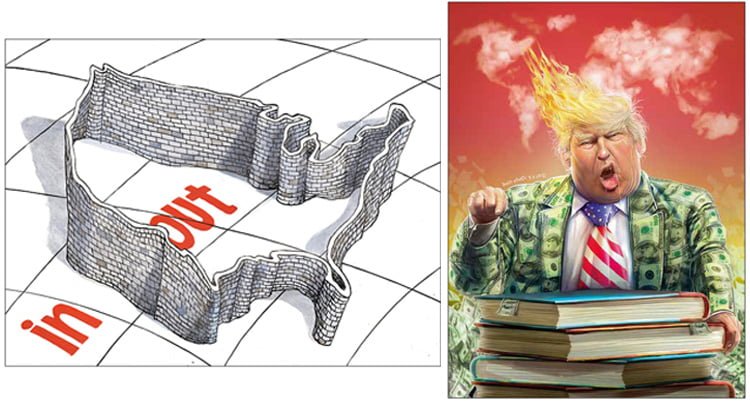 In 2017, first prize in the cartoon category went to Greek cartoonist Michael Kontouris (left) and in the caricature category to Iranian cartoonist Hadi Asadi (right)

The vignettes were exhibited at the Soureh Gallery in Tehran. Gallery of award-winning vignettes. A selection of the vignettes submitted to the competition then travelled to other exhibitions in Iran and 11 other countries, including the Netherlands, Belgium, Brazil, Indonesia and Turkey.

The organisers are the same people who organised a controversial international cartoon competition on the Jewish Holocaust for which they were accused of denialism The first oneThe first, initiated by Iranian cartoonist Massoud Shojai Tabatabai and organised by the Iranian daily Hamshahri, was in 2006, in response to the satirical cartoons of Muhammad published by the Danish daily ‘Jyllands Posten’, and the second in 2016. 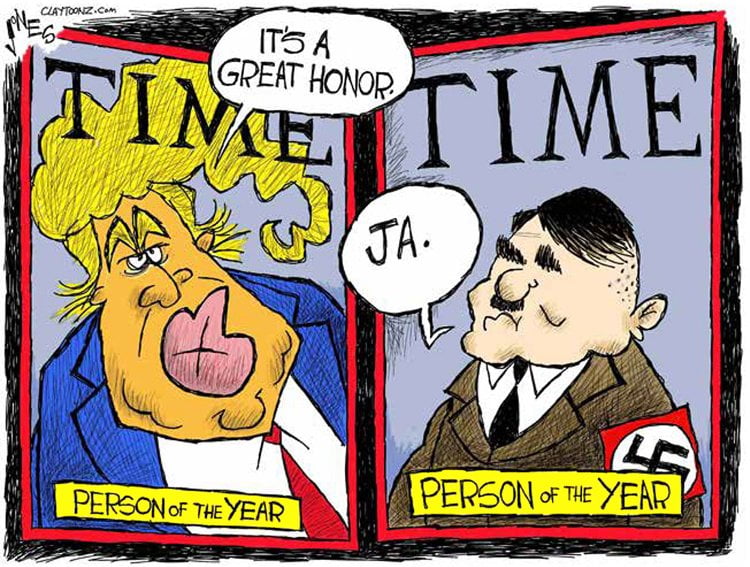 American cartoonist Clayton Jones (Tw– Fb) turned down a non-monetary prize that was awarded to him in the first edition, confessing that he didn’t know what he was getting into.

In his blog, he wrote that he learned about the background of the organisers of this competition from the press and argued his decision to reject the prize:

“It was from these articles that I have learned that Iran’s The Organization for Sacred Defense Artistic and Cinema Affairs, is the same organisation that held a competition on the Holocaust lastyear.

This is where I have a problem.

I didn’t know it was the same group that organised the Holocaust competition. I wasn’t even aware that it was held in Iran until Monday, which is when I found out I had won a prize. I entered several months ago, when I got the application. I didn’t do any research and assumed it was organised in Europe. I don’t know why I assumed that.

: whistling as a sexual compliment) to anti-Semitism. While the “Trumpism” contest wasn’t about any of that, it’s not a party I’m going to accept an invitation to. If the Ku Klux Klan organised a cartoon contest on economics, I wouldn’t participate either, and I wouldn’t want to be associated with a group that engages in anti-Semitism, no matter how they word their denial.

This is why I have to refuse the award, honour, citation, or whatever. Thank you very much, but no, thank you. I don’t want to be in any hate-related group. No matter how much fun it is to make fun of Donald Trump, but for me it’s not about Donald”.

Some 1,600 cartoons from cartoonists from 76 countries, including 6 Americans and 10 Spaniards, were submitted to this competition(List of participants) (Copy Archive). The prizes (Copia en Archive) ranged from 500 to 1,500 dollars. The authors were asked to draw about Donald Trump’s relationship with racism, immigration, the wall, the media, women and Twitter.

Background on the organisers

The organisers are the same people who organised a controversial international cartoon competition on the Jewish Holocaust for which they were labelled as deniers.

The organiser and head of the competition’s organisation Ali-Asghar Jafari (for whom I have not found many references) said at the time that the competition was intended to:

“…highlight the West’s double standards when it comes to free speech, and not to question genocide.”

On the 2017 Trumpism contest, Jafari stated at a press conference:

“Trump’s behaviour clearly establishes Iran’s reasons for distrusting the US, consequently, it was decided to use the capacity of art to point out such behaviour.”

Be careful with cartoons in Iran 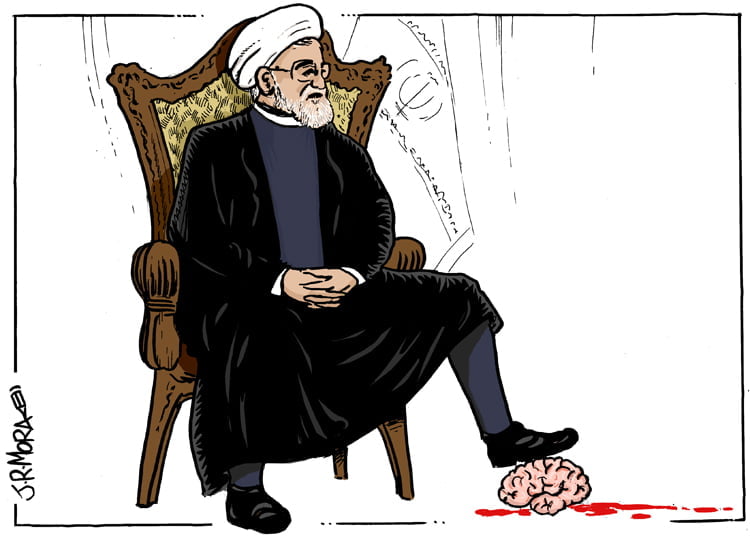 Although Jafari appeals to art, Iran is not a paradise of artistic freedoms, it must be said. Beyond various human rights abuses, more than one cartoonist has been imprisoned in Iran for daring to satirise its leaders.

Here are a few cases.

Atena Farghadani, sentenced to 12 years and 9 months in prison for a satirical illustration 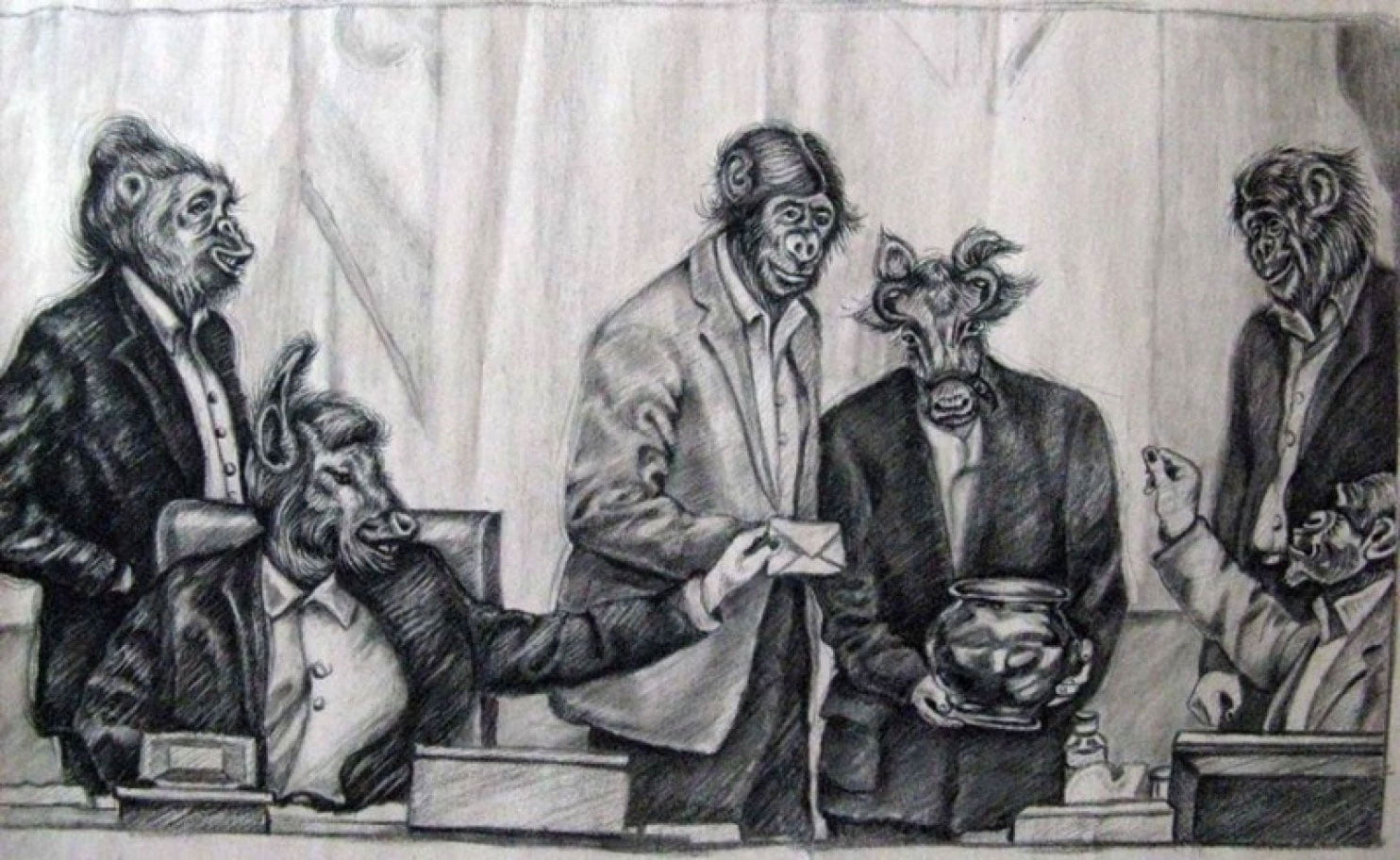 Farghadani’s illustration that landed her in jail

Activist and painter Atena Farghadani was arrested and imprisoned in Iran on 23 August 2014.

On 3 May 2016 she was released thanks to pressure from activists and organisations defending political cartoonists, coincidentally or not, on World Press Freedom Day.

Her “crime”, in the eyes of the Iranian judiciary, was depicting members of parliament with the heads of different animals. 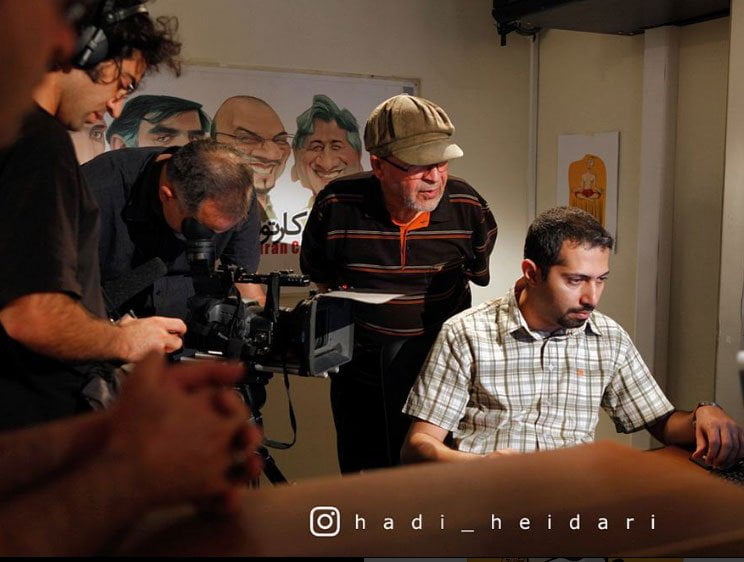 Heidari drawing in front of the cameras in May 2017. Source

Cartoonist Hadi Heidari (Tehran, 1977) was arrested on 16 November 2015 at the Shahrvand newspaper by Iranian government agents. Some sources link his arrest to Haidari’s publication of a cartoon welding with France over the Paris attacks of 13 November 2015.

On 26 April 2016, Hadi Heidari was released from prison. This was his first cartoon released, posted on his Instagram account.

According to Reuters, Saleh Nikbakht, his lawyer, stated that he was detained because of a two-year-old conviction, also related to his cartoons. The same story said that, according to Tasnim news agency, Haidari had contacted his family by phone to tell them that his imprisonment was the result of that conviction.

Heidari has been arrested before. In 2010 he was imprisoned for two months for “propaganda against the state”. In 2012 he also had to go to court and his newspaper, Shargh, was banned for cartoons critical of Iran’s leaders.

On the evening of 22 October 2009, he was arrested along with others participating in a religious ceremony in honour of political prisoners, which was being held at the home of Shehaboldin Tabatabai, one of the prisoners close to the reformist party. On that occasion he spent 17 days in prison for “collusion against national security” 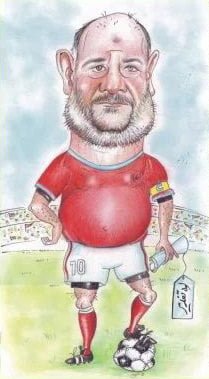 In 2012 Mahnoud was sentenced to 25 lashes for a cartoon depicting a member of parliament wearing a football shirt and holding a congratulatory diploma in one hand. Or at least that is what was published at the time.

Ahmad Lotfi Ashtiani, MP for Arak, was angered by this cartoon published in Nameye Amir, a newspaper in the city of Arak.

Some politicians in Iran, including Ashtiani, have reportedly been criticised for interfering in the country’s sport.

In the cartoon, the MP is shown with a dark mark on his forehead, caused (allegedly) by resting his head for a prolonged period of time for prayer, a mark which the politician also has in reality.

It was difficult to confirm the details of the outcome of this story because there were not many sources, although according to Cartoonist Rights Network quoting a screenshot from the Nameye Amir newspaperfollowing public outcry inside and outside Iran, Ahmad Lotfi Ashtiani withdrew the complaint against Mahmoud, thus sparing him the lashes of punishment.

But the Press Court did not dismiss the case and the judge ruled that Mahmoud Shokraiyeh should pay a fine equivalent to about $100 and the newspaper was also fined the equivalent of about $3,000 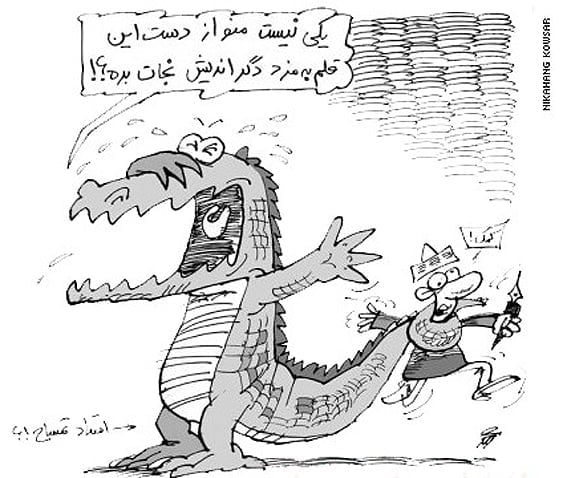 Ayatollah Mesbah Yazdi put Kowsar in jail for this cartoon

A very significant case is that of Iranian cartoonist Nikahang Kowsar(Twitter), who was imprisoned by Ayatollah Mesbah Yazdi in early February 2000 for drawing him caricatured as a crocodile.

The cartoon, which led to Kowsar’s conviction and sparked three days of protests, depicted the Ayatollah as “Professor Crocodile”, a reptile-bodied Mesbah strangling a journalist with his tail. It was a satire on freedom of expression in Iran and an allusion to a speech delivered by Mesbah Yazdi the day before.

Mesbah Yazdi was known as Professor Mesbah among his supporters. ” Mesbah” rhymes with the Persian word for crocodile, ” Temsah “. In the wake of the cartoon his detractors call him a crocodile because of his nose and also as a nod to his voracity for power.

Nikahang was arrested and spent seven days in prison (other sources say six days). In 2001, he sent a letter of apology to Mesbah and the cleric accepted it, but in 2003 Kowsar was threatened with death and his name appeared on a hit list, and he went into exile in Canada and became a citizen.

He works in Washington DC and, among other things, is the editor-in-chief of Khodnevis.org, the first Persian citizen journalism platform.

Mana Neyestani, jail and exile for a word spoken by a cockroach 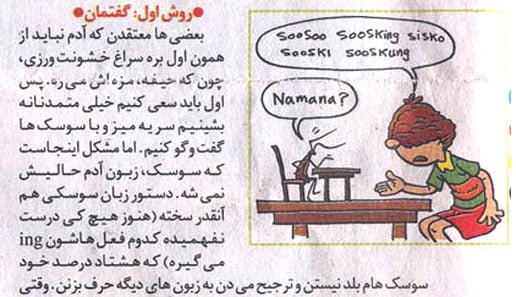 For that cockroach word, Neyestani ended up in jail and had to go into exile

On 19 May 2006,Mana Neyestani published a cartoon in the children’s supplement “Jomeh” of the daily “Iran” about a conversation between a child and a cockroach, which was the trigger for his problems.

In the cartoons, which depicted cockroaches(see full page) (source), he criticised the debates between reformists and conservatives in those years. In the text accompanying the cartoons, the cockroach spoke in Persian. Part of it responds in Azeri, Neyestani’s mother tongue.

The Azeri word of contention is “Namana”, a common term in Iran when they don’t know what to say and which could be translated as “what “.

Ethnic Azeris interpreted this as an insult (sic). Demonstrations and riots ensued. According to Iranian police some 300 people were arrested and at least five protesters were killed (some media reported four, others an undetermined number). Mana insisted that he did not intend to offend the Azeri community, but this did not prevent him from receiving death threats.

The government arrested Mana Neyestani, the newspaper was temporarily closed and shortly afterwards the cartoonist was sentenced to 2 months in prison. He eventually left Iran for exile in Malaysia. In 2010 he settled in Paris.

In 2010, Cartoonist Rights Networks International (CRNI) awarded him its annual Courage Award. Mana was unable to attend the ceremony in Portland, Oregon (USA), due to visa problems (according to CRNI). His friend and fellow cartoonist, Iranian Nik Kowsar (CRNI), received the award on his behalf. At the ceremony Nik read a Mana statement.

In 2016, La Cúpula published in Spain an interesting book by Neyestani entitled“An Iranian metamorphosis” in which the author makes a graphic review of his experience in section 209 of Evin prison (Tehran) where he was imprisoned together with the editor of the magazine and for the months of escape as an exile, together with his wife, in the United Arab Emirates, Turkey and China. 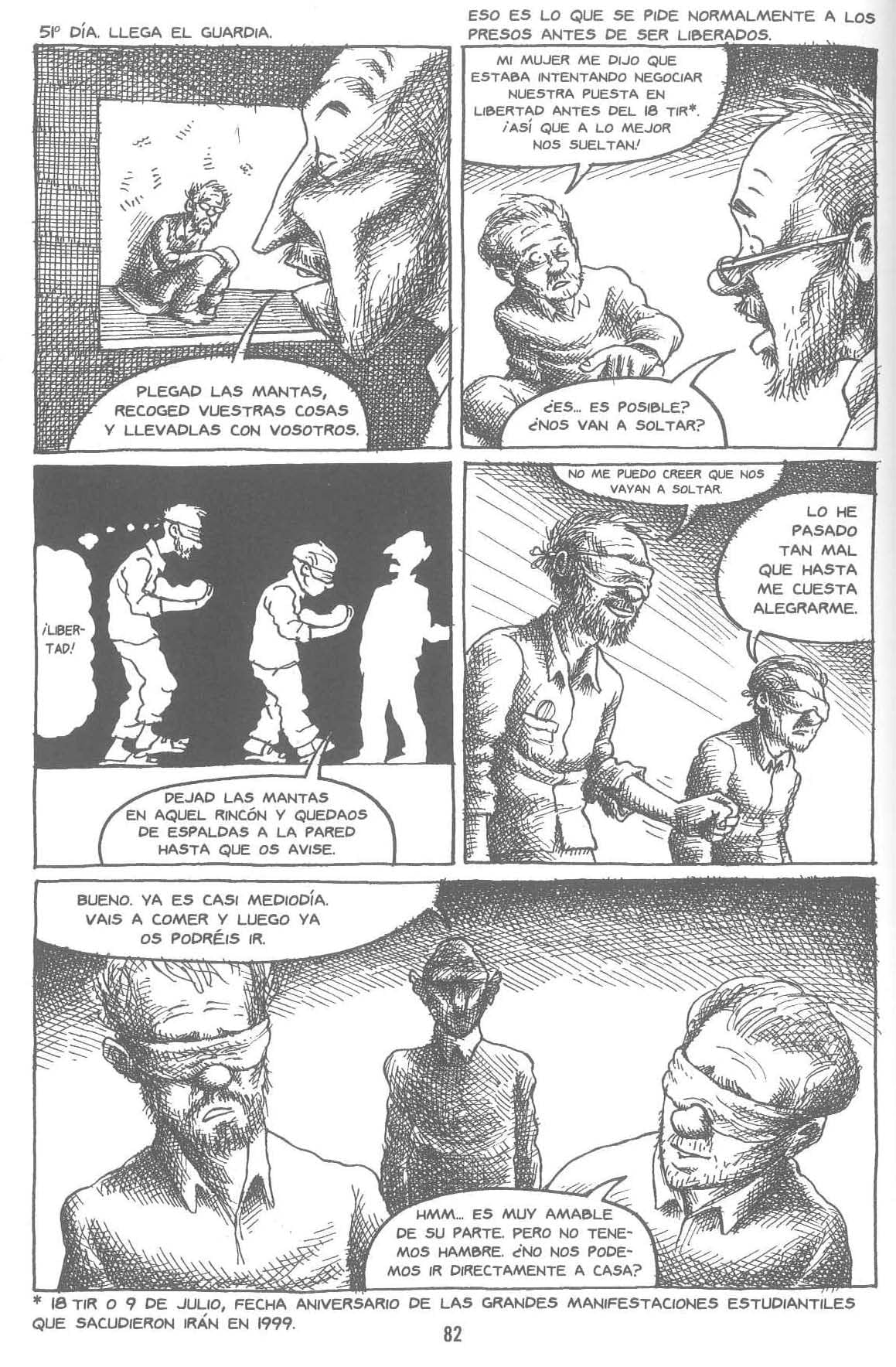 A page from “An Iranian Metamorphosis”. Source