“After the death of 13 soldiers in a helicopter crash in Mali, the army decided to change its recruitment campaign. The slogans are the same (yes, they are the real ones) but the images have changed a little”.

The cartoons, signed by BicheThe vignettes, signed by the French army, refer to the death ofthirteen French soldiers from Operation Barkhane in Mali, a continuation of the campaign against terrorism.The soldiers were killed in a collision between two helicopters.

“I joined the ranks to stand out”, reads one of the drawings, which uses one of the army’s campaign messages, showing a coffin draped in the French flag. 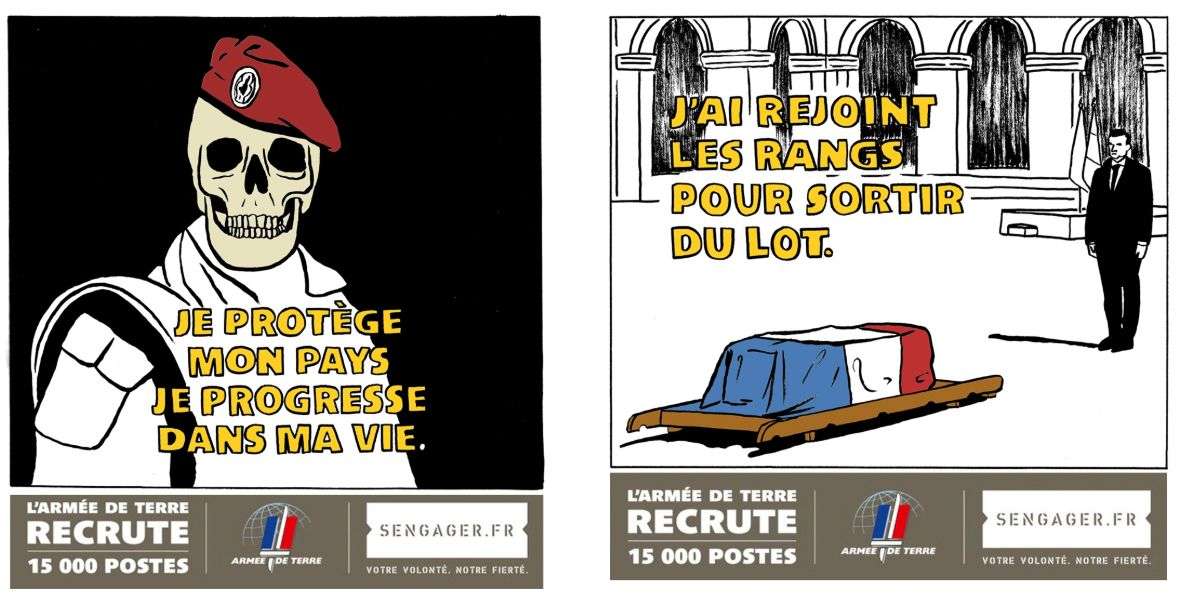 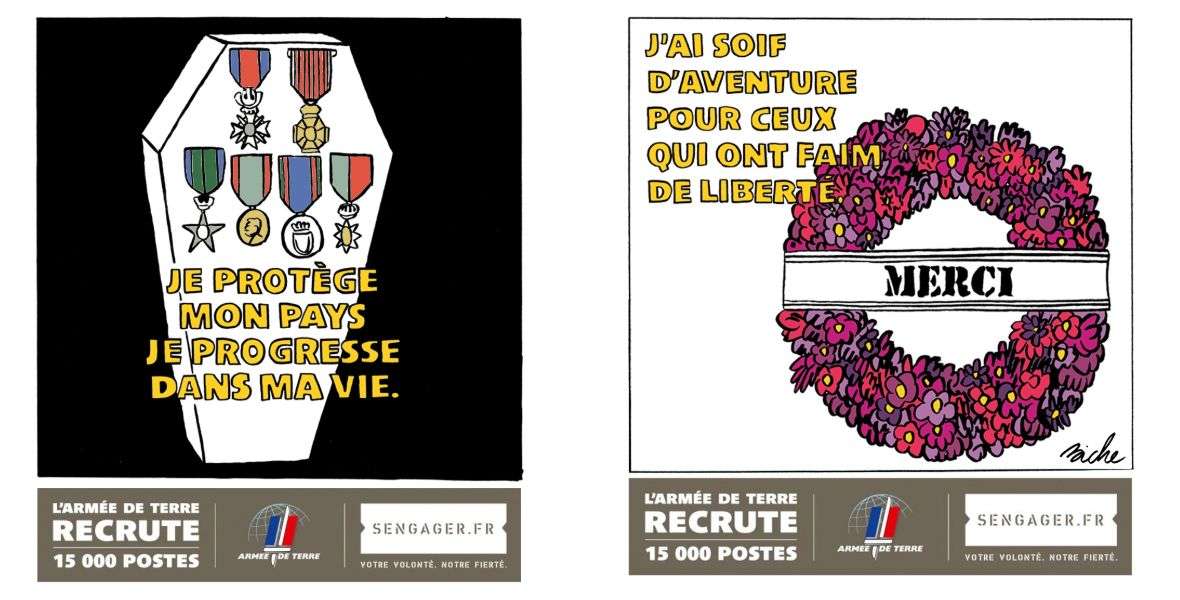 This satire with an anti-military message, full of black humour, as usual in Charlie Hebdo, has not gone down well with the military This is how he put it army General and Chief of Staff Thierry Burkhard:

“Deep indignation and discomfort at seeing this drawing by Charlie Hebdo Charlie Hebdo My thoughts go first to the families of all the soldiers killed in action to defend our freedoms.”.

The next day he published on his official account an letter open letter to the magazine’s editor to let him know. In the text, he describes the cartoons as terribly outrageous and wonders why they are being scorned.

“Immense grief that overwhelms me at the thought of the new sadness it is inflicting on those families who are already suffering”. “What have we done to deserve such contempt”

He also takes the opportunity to remind them that a tribute to the deceased soldiers will be held on Monday 2 December in the courtyard of La Cour d’Honneur des Invalides in Paris, and invites “with sincerity and humility” the magazine’s editor, cartoonist Laurent Sourisseau, Riss, “to join us on this day, to bear witness, as they have suffered ideology and terror in their flesh, and to offer them (the victims) the recognition they deserve”. 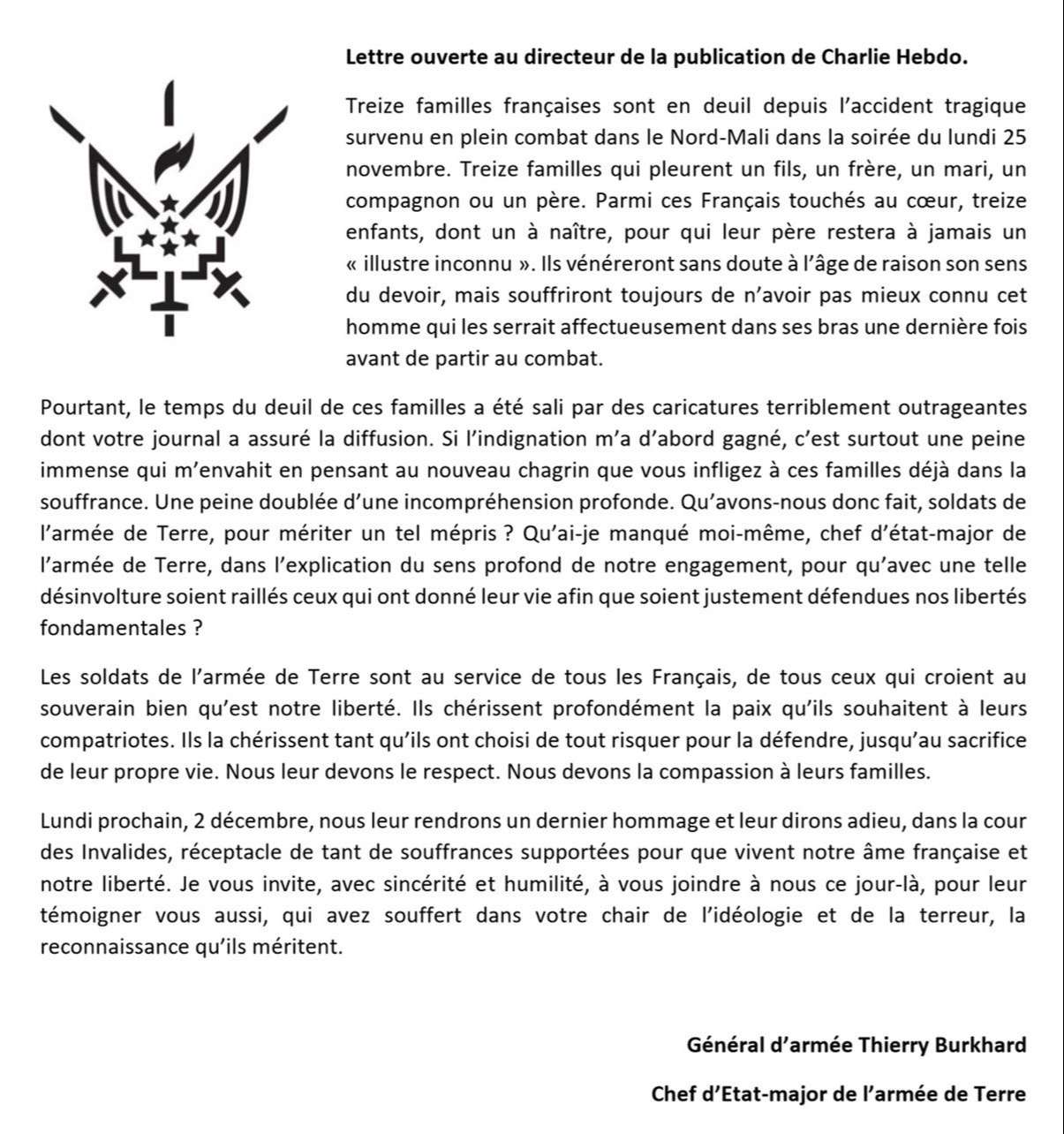 On the eve of the national tribute to the soldiers killed in Mali, the editor of Charlie Hebdo wrote in a letter to the chief of the General Staff that“our newspaper must remain faithful to its satirical, sometimes provocative spirit“.

“However,I wanted to tell him that we are aware of the importance of the work carried out by French soldiers in the fight against terrorism,” the editor added. (Source)

On reflection and from a distance, the cartoons do not strike me as excessively cruel if we take into account other cartoons that the magazine has published on other, also sensitive, issues. They are satires that speak of death. That’s what war is like. And you know, war never changes.