Antonio, “Lumpen“, is a cartoonist from Seville who doesn’t look for the “easy laugh” but to create a reaction in the reader.

He defines himself as the last lame step, but he has a privileged view of how one part of society is setting the pace for the others. His style is critical and direct.

In his vignettes you can see the hand of a graduate in Fine Arts and a creative artist. In fact, as a teenager he wanted to be a guitarist or a photographer. Although life took him in a different direction, now his challenge is to become an artist of the image and a surviving cartoonist.

An unoriginal question, who hides behind Lumpen?

If I tell you, my identity will come out, so I have no choice but to ask for political asylum on some tropical island. I’ll settle for a small, little villa for nothing. I’m a guy with a certain impression that we’ve been going down the shitter for a long time, but we’re not quite there yet.

Why do you choose Lumpen as your nom de guerre?

I didn’t spend a lot of time thinking about the choice of that pseudonym. I simply thought that signing with that nickname was the most direct way of introducing myself and declaring myself in the most unvalued status of the social hierarchy, with nothing of my own to hide or to be singled out other than the tangle of thoughts that I catalyse with drawings. It’s like a way of saying, but without victimisation, “here I am, I’m a lumpen, I’m the last lame step you step on but who has a privileged view of how an absurd part of the world is setting the pace for the rest of the sleeping world in a terrifying way. 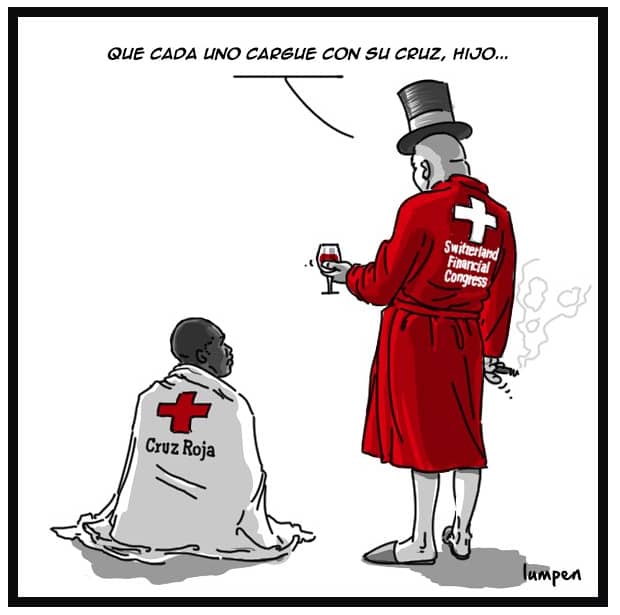 In your personal description, there is a whole vision of graphic humour, I would say a declaration of intentions, you can go deeper into the concept of “tragic humourist”.

I am particularly affected by dramas, but that doesn’t mean I make black humour. Beyond humour as a tool for laughter, I am attracted by the idea of hitting the nail on the head in the face of so much blindness, I feel I am taking part especially in the section of the most dáñinos events that we receive daily, and not only that but I also investigate to capture a graphic scene in which more than looking for the humour of a laugh I intend it to be the artefact of a reaction. On the other hand, I think that the current political and media panorama gives me a lot of grief, hence the tragic look.

Do you think that a cartoonist has it easy nowadays, with social networks as an ally?

I don’t think it’s easier for a cartoonist nowadays. A great success of social networks is the potential for dissemination, that’s irrefutable, but it’s not synonymous with success in terms of profitability in terms of earning a living. Obviously, the fact that your work is disseminated and you are known opens doors to that end. I wish there was a more optimal consumption of graphic humour, I would see it as very healthy for both humorists and recipients. 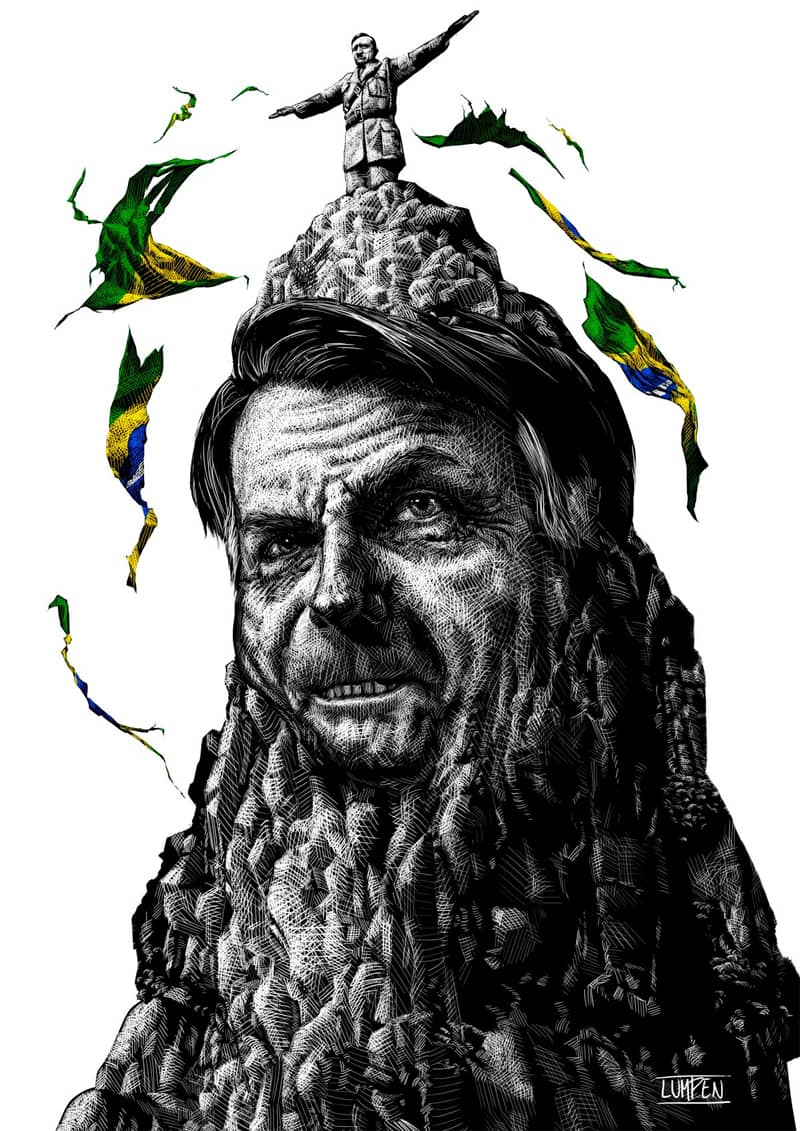 What do you think of the humour guild?

I see it as a survivor. Maybe I could be wrong, but it’s a tough profession in terms of future security. On the other hand, I see it as brave, at least in the sector of comedians I follow most. Choosing themes that are committed to the environment, without being silent, without fear of gags or censorship, with a very well-adjusted aim at the target. They don’t stop being what they are, nor do they lose their identity or change course.

How does one take the step from doing a few doodles at home to trying to make a living from graphic humour?

Well, I ask myself this question every day and when I have the answer I’ll send it to you. I’ve been drawing for a good handful of years and I’ve dedicated myself to making humour in other ways, but I have to say that Lumpen was born very recently and it’s now the challenge it has set itself. 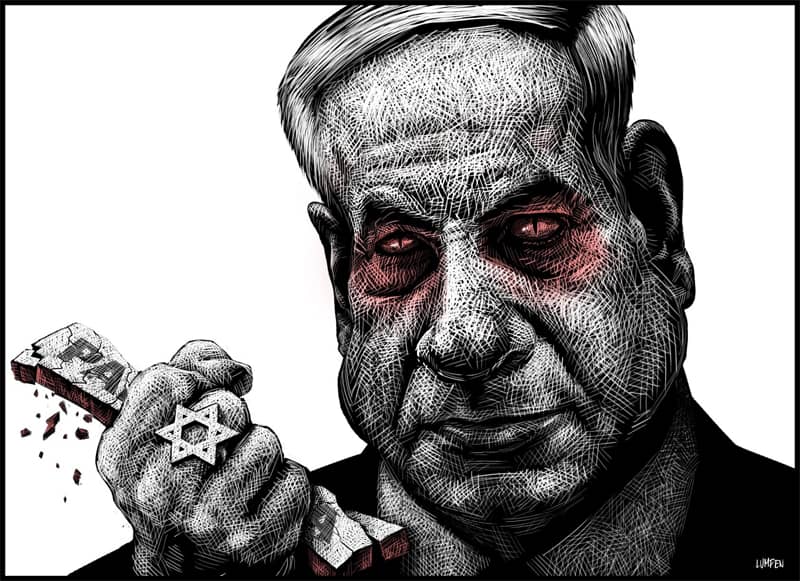 Do you admire someone…

I admire El Roto a lot, he’s my favourite in his way and in a certain way he’s the one who made me feel the desire to do what I do. Forges is another great. I also feel influenced by JR Mora who works for this magazine, his way of contemplating the daily news clowning is a delight. It’s too long a list of cartoonists I admire to break it down here.

Yes. Definitely that we have more female cartoonists. 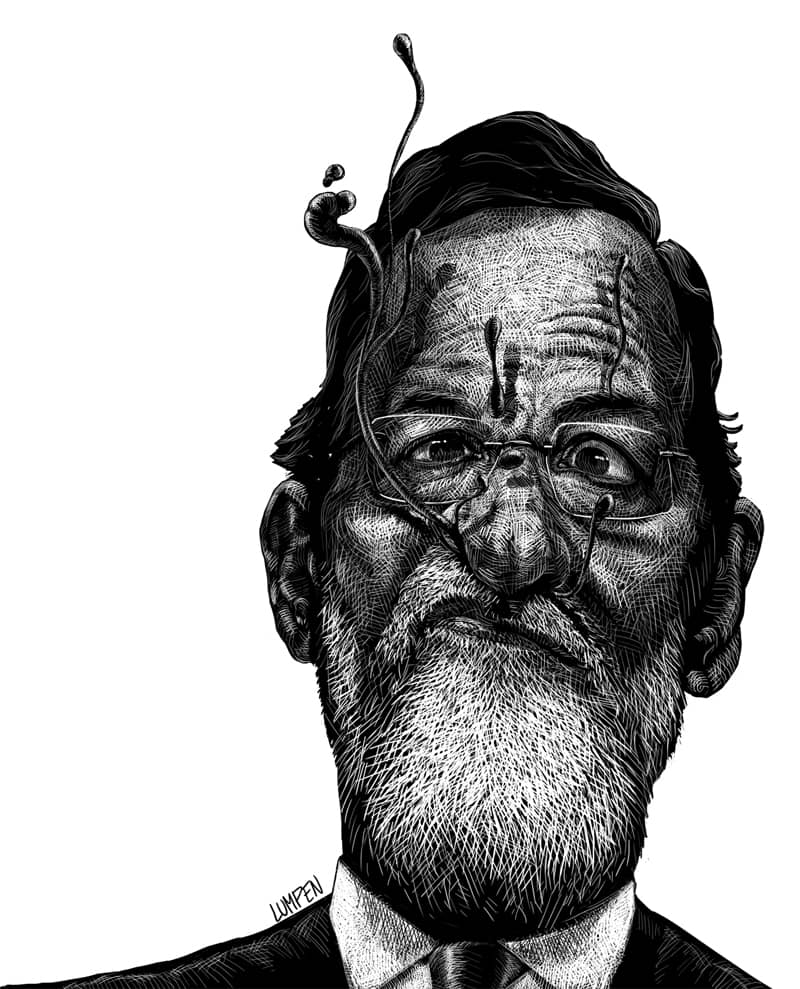 What I like most about it is having complete and absolute freedom, something I don’t have in my day job. And what I like least is that due to the great success of social networks over the last few years, a certain addiction to feeling satisfied when there are repercussions has come into play. I’m referring to that uncomfortable craving to see retweets and notifications after a publication to show you that your cartoon is being liked. I don’t particularly like being a slave to that.

What is the cartoon that you personally like the most of the ones you’ve done, or in other words, is there one that you’re particularly proud of?

I don’t think I’m particularly proud of any of them yet, although the one about the Greek castaway asking for help and from above German help is thrown to him with a gallows-knotted rope seems to have worked very well as a metaphor for the Greek situation in recent months.

Following on from the previous one, does this cartoon coincide with the taste of the general public?

It was quite liked, although I never count or rank the best rated ones.

How do you deal with the criticism that comes with any public work?

Perfectly, I’m immune. I’m not affected by the destructive ones, nor do I try to believe the praise too much. 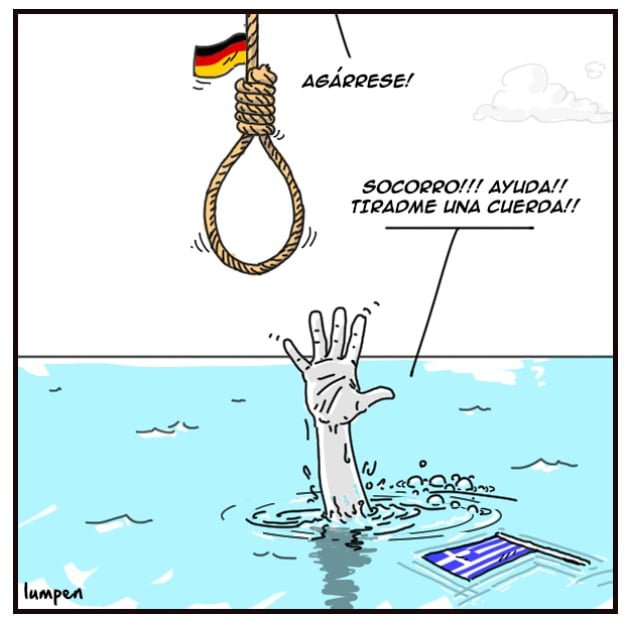 Do you think there are limits to humour, after what we experienced, for example, with Zapata’s tweets or the Charlie Hebdo attack?

I often think they do exist, but nobody knows exactly where the border is. And frankly we shouldn’t let them set limits, because to limit freedom in a prohibitive way would lead to future repression. Will they put limits on the humour of the Comedy Club tomorrow? Will they censor Gila’s monologues on the internet next month?

In this regard, I would also like to say that they are trying to make the debate on the limits of humour a hot topic, but this is nothing more than a diversionary strategy so that we don’t talk about the double standards with which they contradict themselves in order to use freedoms as they please and in an arbitrary manner.

What is a cartoon for you?

An opinion piece, it is the visual snapshot of what you have not been told. It is the perfect scenario for a second reading, a map that may help you to understand the direction many things are taking.

What do you want to be when you grow up?

My father, whom I lost recently, used to tell a joke that I always remember:

-Boy, what do you want to be when you grow up? 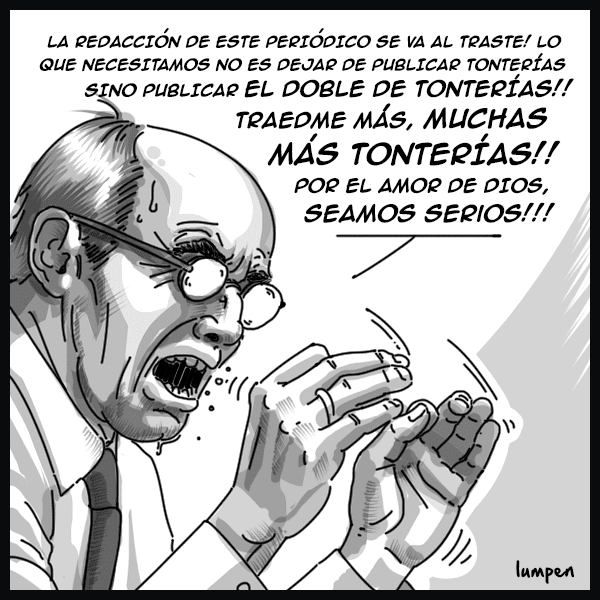 A month without news of Egyptian cartoonist Ashraf Hamdi