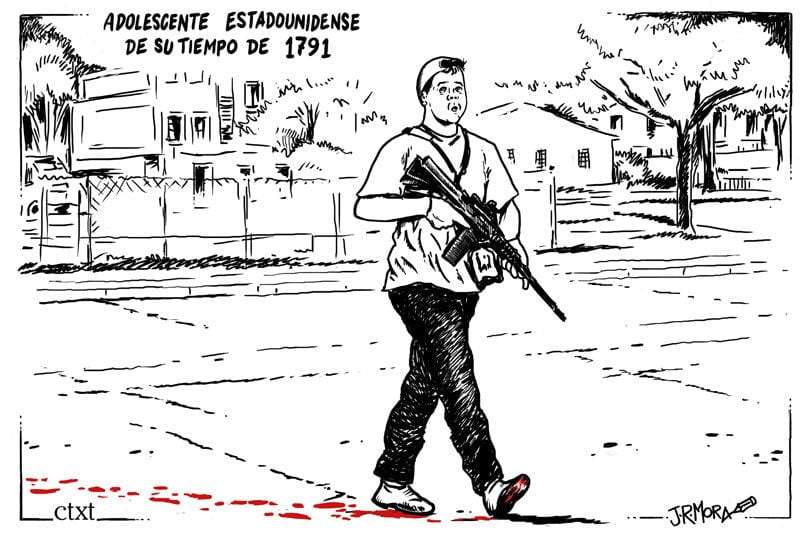 Kyle Rittenhouse, a teenager who sleeps in his cap, wanders around looking for the brain he never had.

“As a well ordered militia is necessary to the security of a Free State, the right of the people to keep and bear arms shall not be infringed.”

With this terse and flexible phrase, added as an amendment to their Constitution in 1791, Americans can walk down the street with a potent banger of killing people.

The thing, written for territories where the state had not yet been established and security was provided by private armies or self-defence groups and in the days when to fire a shot you had to make a mess and spend a lot of minutes on it, is still today the excuse to carry, modify and end up using weapons that allow more than 700 shots per minute to be fired.

You know the arguments of those who defend the right to bear arms.

Among other things, they argue that an armed people, in addition to exercising self-defence more forcefully and effectively.

It is supposed to deter the state from exercising tyranny against the people. They even claim that guns reduce crime rates and that it is the bad guy who kills, not the gun, you know. The culture of “good” killing without further debate is so ingrained over there.

This primitive and circular thinking means that any unbalanced person can make a creative and capricious interpretation of the law, shoot at people preemptively in the middle of any place or just out of a simple burst of anger and kill more people in less time.

And also that there are others, even more brainless, who call the slaughterer a hero while the police, increasingly militarised, swing at will in their interventions and continue to kill people at the drop of a hat.

Based on this loop of arms logic enshrined in the second amendment, they should try to expand the type of weapons available to ordinary citizens (simply by buying them in a supermarket) and add bazookas, flamethrowers, tanks, missiles and some small or medium-sized atomic bombs to the list.

The state could also bomb its own population, and in fact has already done so in the past.

The US serves an important function, warning us about what not to emulate.