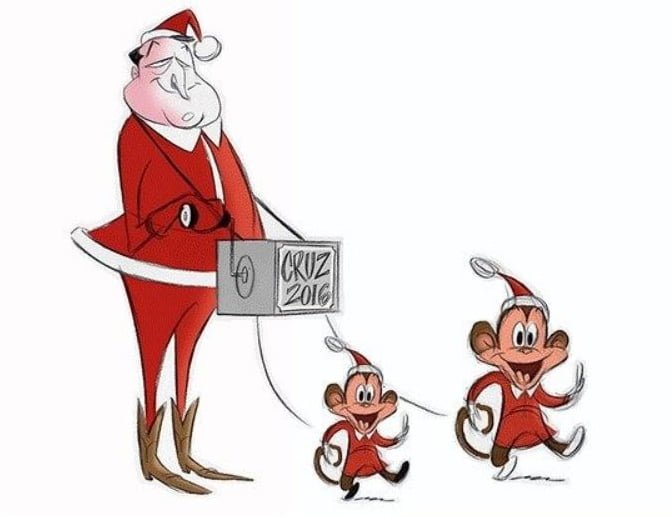 The Washington Post has decided to withdraw the cartoon/animation (animated gif) of Ann Telnaes published on Tuesday 22 December, which caricatured the daughters of Republican candidate Ted Cruz as little monkeys. The same day, in the afternoon, the cartoon disappeared from the web following complaints from Ted Cruz who asked that no one’s children be used for political attacks. Other candidates, including, of course, Donald Trump, attacked the newspaper for publishing it.

The cartoon was intended to satirise the use of his family for political purposes, alluding to a video of the senator’s presidential primary campaign in a humorous way. The video shows his wife and two daughters, to whom Ted Cruz reads Christmas stories in a political version.

The newspaper admitted that it had not reviewed the cartoon before publication, adding that it is generally the newspaper’s policy to leave children out of the editorial section. And while they understand that the author thought the political campaign justified the treatment given to the cartoon in this case, they disagree.

Editor’s note from Fred Hiatt: It’s generally been the policy of our editorial section to leave children out of it. I failed to look at this cartoon before it was published. I understand why Ann thought an exception to the policy was warranted in this case, but I do not agree.

Ann Telnaes, on the day her cartoon was published, defended it as follows:

Ted Cruz has put his children in a political ad, don’t start screaming when editorial cartoonists draw them like that too. (*)

(*) I don’t know if this is the best translation, I interpret it as referring to drawing children as campaign elements.

Related, 48 cases in other countries.