When the government is the censor

Someone in the government has deemed this cartoon a violation of Indian law and has asked Twitter to delete it. The reported its author.

The cartoon, published which was published on 3 April by the freelance cartoonist who signs his social media accounts as “Vikaso “, depicts the chairman of the Maharashtra council of ministers, Uddhav Thackeray dressed in a traditional orange kurta. He appears nervous and hesitant as he has to decide between two briefcases.

One represents “closure” and the other “recovery”, referring to the management of the pandemic. On the right is written “The best C.M.” (Chef Minister).

For such a white and bland joke, the cartoonist has received the typical Twitter warning that almost rips off:

“At this stage we have not taken any action on the content reported as a result of this request.

“As Twitter believes strongly in defending and respecting the voice of our users, it is our policy to notify our users if we receive a lawful request from an authorised entity (such as law enforcement or a government agency) to remove content from their account. Notification is made whether or not the user lives in the country in which the request originated. “ 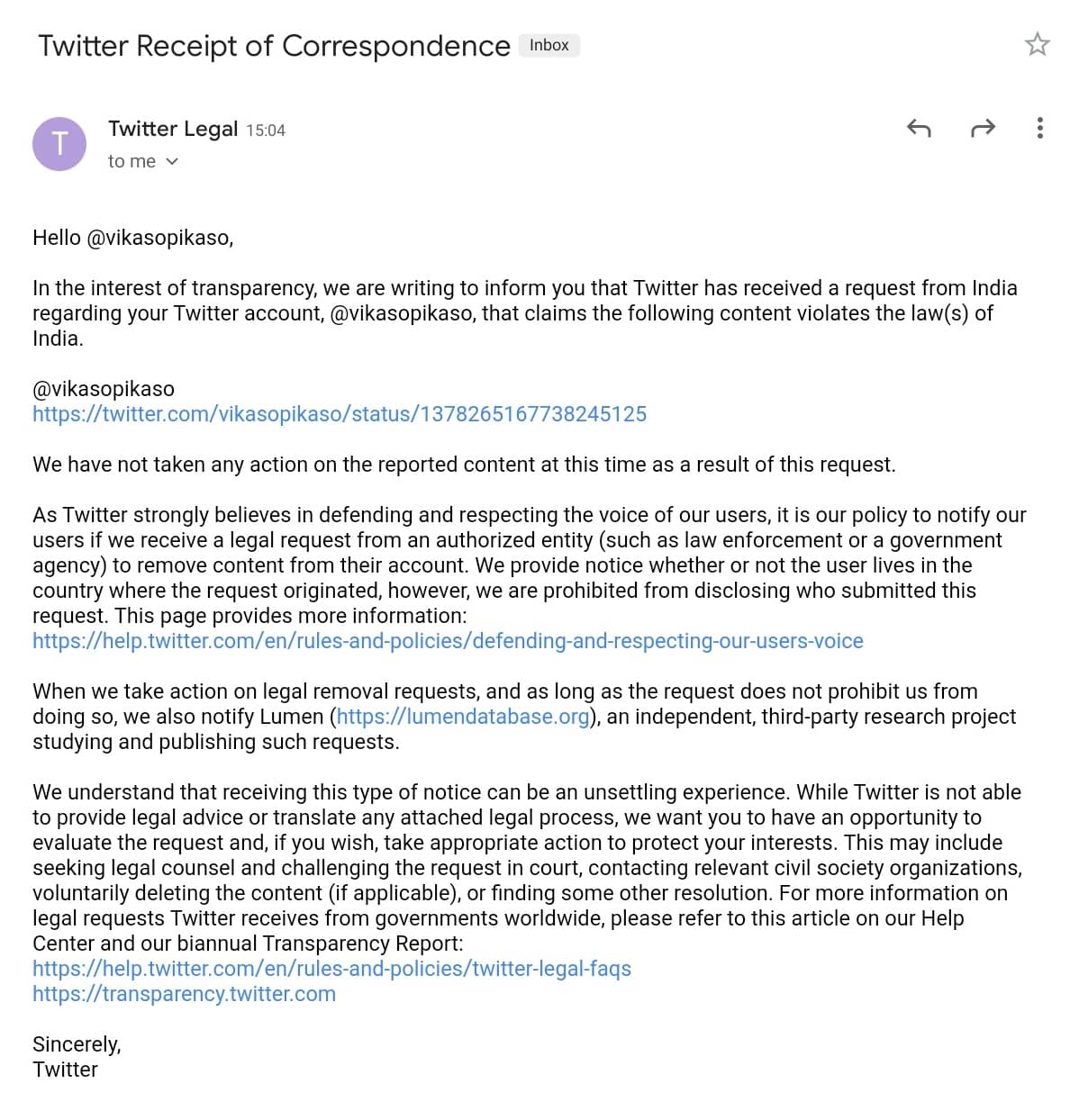 Initially, the identity of the complainant is unknown, but as is clear from the notice, the complainant is an “authorised entity” such as a governmental and/or law enforcement agency. The complainant can then prepare himself for what may come his way and organise his defence against possible legal proceedings. Although Twitter does not usually remove content at the first attempt, it is customary for Twitter to notify the author of such complaints. It also sends them to Lumenwhere records are kept for further details.

Lumen is a very useful database where legal complaints and requests for removal of content on the internet are collected and analysed. Lumen was created to help users know the origin and cause of these requests so that they can familiarise themselves with the laws that are used by those requesting the deletion of content and be able to exercise their rights to prevent it.

One of the complainants who appears in Lumen in a good number of these complaints is Erdogan and/or his government.

Shut up or go to the prison

One wonders why a government would choose, as a first option, to ask Twitter to delete a cartoon that it claims “violates the laws” of the country, without citing which law it is referring to, rather than taking legal action against the author. I don’t have a short answer to this. I think it’s just one more piece of cockiness from those who think they are above freedom of expression. Tyrants convinced that they can simply shut mouths by using the usual threat as a warning to sailors.

It is more than likely that the complainant is clinging on to a gleeful and twisted interpretation of some of the alleged offences under the Indian Penal Code (IPC) IPC (Indian Penal Code) and a few more of the gift of the infamous “Information Technology Act“. (PDF).

In principle he can be charged with almost anything besides the traditional “insult” to a ruler for simply caricaturing him. He can be convicted and imprisoned for “provocation with intent to riot” (section 153). “Insults and provocations with the intention, or in the knowledge, that such provocations are likely to disturb the public peace” (section 504) “creating, publishing or circulating rumours” (section 505) and “publishing or disseminating obscene material in electronic form” (Information Technology Act, section 67).

No jokes in India about critics to the authorities, they send you to jail quickly.

Cases of cartoonists who have been in trouble of some importance because of their cartoons or satirical illustrations. There are also some stories of other people who, without being cartoonists, have got into trouble for sharing them.