Alex Jones to pay $15,000 to Matt Furie for the unauthorised use of Pepe the Frog

Alex Jones, owner of Infowars, has agreed to a settlement with Matt Furie in which he will pay the creator of Pepe the Frog $15,000, resolving a lawsuit the cartoonist filed against Jones for unauthorised commercial use of the character.

The total settlement figure represents all of the proceeds from the sale of the poster, $14,000, plus an additional $1,000 that Furie has announced he will donate to the amphibian conservation charity “Save the Frogs!“in a more than obvious act of satirical homage to Pepe’s character.

Now, both sides are selling the deal as a triumph, but it’s fair to say that Furie has made Jones take a knee and cough up the cash, Furie has agreed not to go any further with the lawsuit, something that would most likely have ended up doing much more damage to Infowars’ wallet.

Louis Tompros, Furie’s lawyer, recalled that they got what they wanted:


“This is what we have been asking from the beginning of the case, that Infowars stop selling the poster and hand over all its profits, “Mr Furie has never authorised and will not tolerate anyone making money using Pepe as a symbol of hate.”

Alex Jones gives his particular interpretation of the matter and speaks of an “honest tariff”.

“Happy to announce that the people suing Infowars over the use of Pepe the Frog have agreed to settle and accept a licensing fee of $15,000. We were initially sued for millionsSome people thought we wouldn’t fight the case. We did. We will only pay an honest license fee, and nothing more.”

On Monday 5 March 2018, Matt Furie filed a lawsuit in Los Angeles against Infowars, the website of conspiracist Alex Jones, for copyright infringement. It was the second that the cartoonist and creator of Pepe The Frog had filed as part of a legal campaign to reclaim unpermitted uses of his character that he announced at the time.

The lawsuit was based on Furie’s failure to authorise Infowars to sell a poster featuring Pepe the Frog alongside images of Alex Jones, President Donald Trump, far-right agitator Milo Yiannopoulos and other right-wing figures.

The poster, titled MAGA (Make America Great Again), sold for $29.95 on Jones’ web shop and was advertised as a limited edition by “renowned artist and patriot Jhon Allen“. The site took advantage of the demand to encourage sales, calling for it to be bought before it was withdrawn. 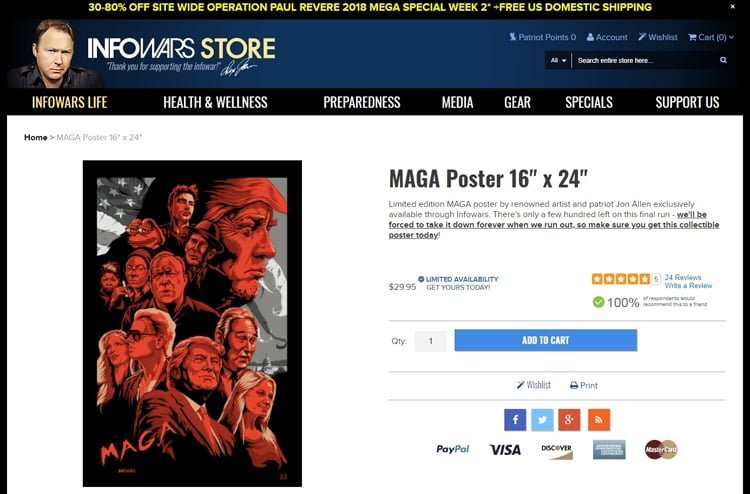 Screenshot of the Infowars shop page where the poster was sold. Copy in Archive.

The transparency of the Spanish monarchy 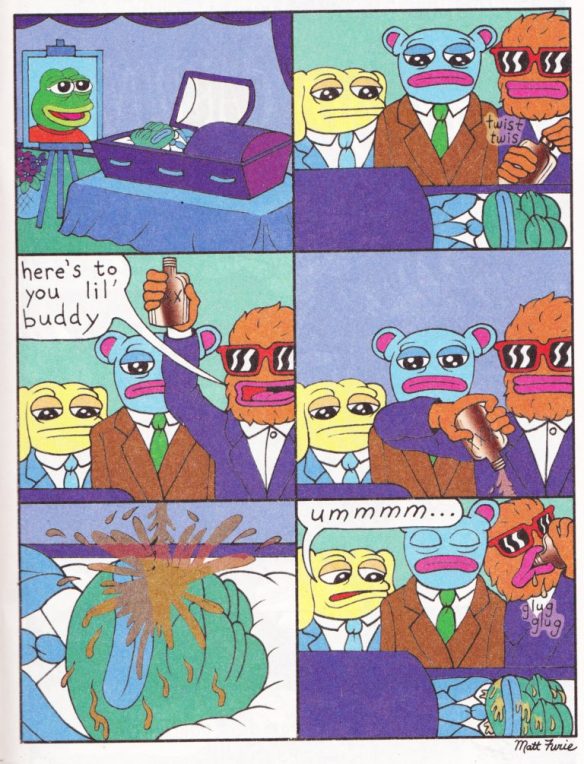 The death of Pepe the Frog