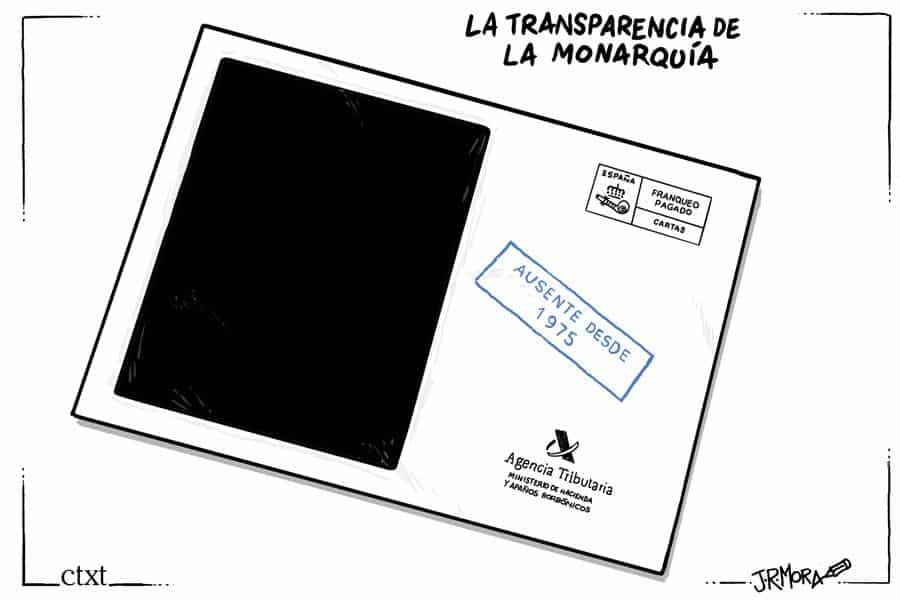 The transparency of the Spanish monarchy. Cartoon of 12/12/2020 in CTXT

The emeritus king paid 678,393.72 euros to the Hacienda to regularise his tax situation.

This, read as it is, sounds like a joke because we soon find out how much he paid but nothing is known about the details or what it was for, so much for transparency regarding the Royal House.

The matter came to light in this statement from the artist formerly known as “El Campechano”. First paragraph states that this is a statement “without prior request” and the second reminds us once again that he is at the disposal of the justice system, which has not yet contemplated picking up the shotgun and barricading himself in his mud house in Abu Dhabi. 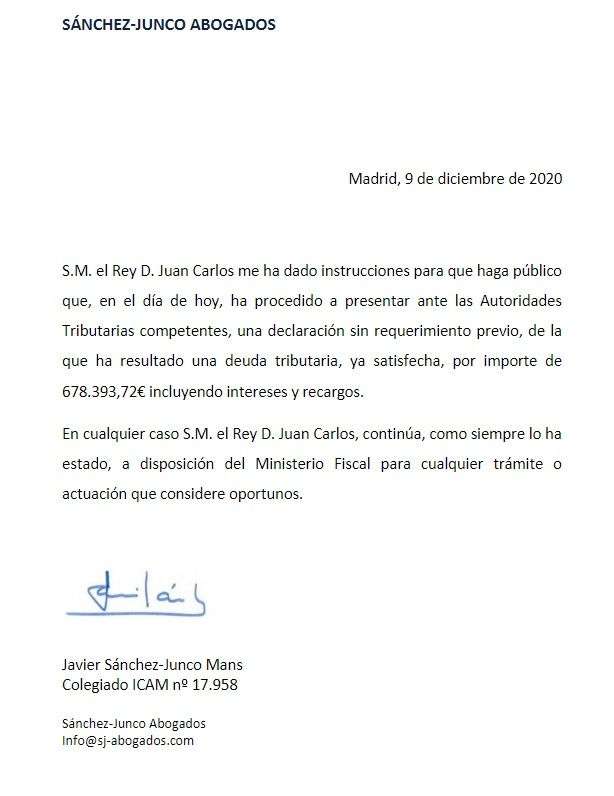 The first, but not the only and most important question is what kind of tax debt is it that you are now paying for?

Well, all there is is speculation. Some say that it may have something to do with donations from a Mexican businessman colleague that were made through a colonel who is a close friend of the emeritus.

For this shady business, the Supreme Court Prosecutor’s Office has opened an investigation into the alleged use by Juan Carlos I and some members of his clan, such as Froilán and Victoria Federica, of credit cards with opaque funds from this businessman with which they happily spent on rich caprices.

Allen Sanginés-Krause is the Mexican businessman who admitted having made six transfers to the king’s collaborator and alleged front man, Colonel Nicolás Murga Mendoza, between 2017 and 2018, when Juan Carlos I was no longer inviolable, for a total of 270,000 euros.

Meanwhile, here we continue rambling on about whether the Treasury should have investigated at the time these parties of money in black that moved from hand to hand between the borbons. 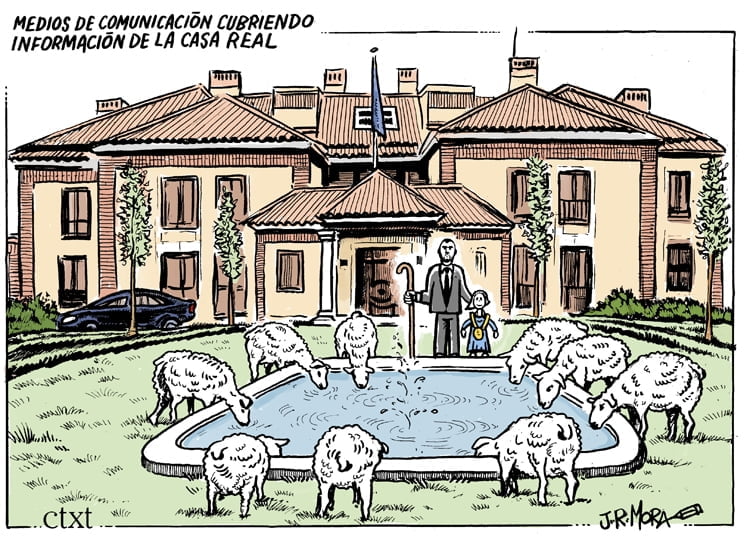 Another thing to laugh at is to read that there is a campaign to wash the image of the monarchy. Right now. Right now, of course. A good number of the media and political circles have been cleaning up and giving splendour to all the shit of any member of the royal family for decades. And we don’t even need to talk about Juanca, here he has been left to his own devices. To this day, there are journalists who, if the emeritus were to shit in their mouths, would still flatter him with passion.

Submissive journalism
Adolfo Suárez stated in an interview with Victoria Prego in 1995 that there was no referendum on monarchy or republic because: “we did surveys and we lost”. The self-styled journalist immediately began her own campaign to take the heat out of the matter..

Perhaps the only difference is that while just a short while ago personalism was exalted and we were told that this succession monarchy was to be praised for its genetic nature because it was represented by a countryman who was much loved for his more personal side, for his charisma and humility, now he is to be separated from the institution and not taken into account because “institutions are above people“, as Margarita Robles says.

Overnight, they treat the former king, heir to the throne and Supreme Command of the Armed Forces as a figurehead who has stolen a cheap vase from the Zarzuela Palace.

But, of course, what is she going to say if Pedro Sánchez affirms, maintains and repeats every time he can that “The Republicans feel, for the most part, very well represented in this parliamentary monarchy that we have” and has the twisted theory that Felipe VI is a guarantor of freedoms and represents I don’t know what kind of succession bagpipe of a supposed anti-Francoist struggle, for rights and freedoms and against the dictatorship. It’s all very funny.

Borbon legacy
History has not changed. Felipito inherited a kingdom by grace of his Borbonian-Franquist DNA. He cannot even say that he was elected by the Spaniards in that Franquist farce of 1947, or the other one in 1966..