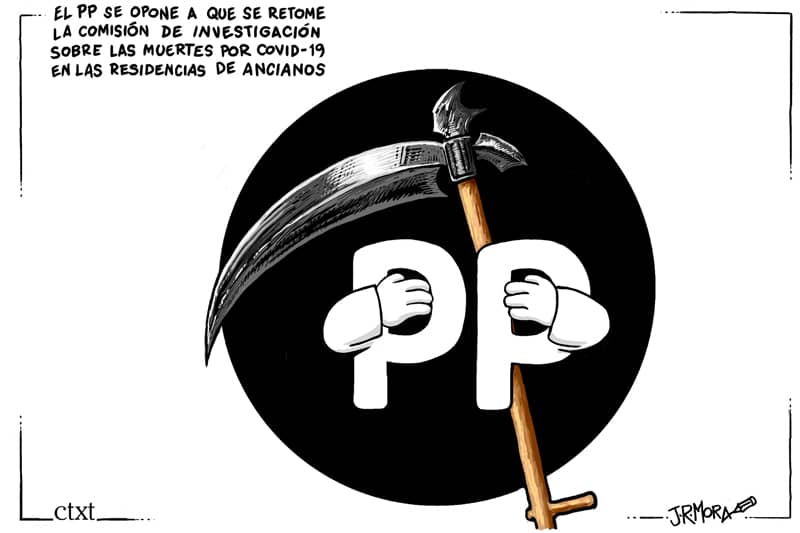 PSOE, Podemos and Más Madrid registered a petition on Friday with the intention of resuming the commission of enquiry into the deaths caused by Covid-19 in the residences, which was halted by the dissolution of the assembly due to the early calling of elections on 4M

They request that the president, Isabel Díaz Ayuso, and the members of her Governing Council, as well as other civil servants and senior officials, testify so that they can give explanations on the management of the pandemic and more specifically on the protocols followed during the first wave that prevented the infected elderly from being referred to hospitals.

Well, in the PP, after repeating ad nauseum that all the blame was from Pablo Iglesias and that the Community of Madrid had no competence (false), now refuse to support the recovery of the commission claiming that they will not allow left-wing parties to “play with the pain of the families”.

You know, the equivalent of their traditional rattle of “not reopening old wounds” when they are responsible for having opened them. They already did it in December 2020, when, together with Ciudadanos, rejected the commission of enquiry into the residences in Castilla y León to avoid “throwing the dead in each other’s faces”.

In May 2020, 26 relatives of the Marea de Residencias filed a joint lawsuit against the president of the Community of Madrid, the Minister of Health, Enrique Ruiz Escudero and 10 directors of residences to open an investigation for the alleged crimes of reckless homicide, humiliating treatment, prevarication and denial of assistance.

The Popular Party denied to the point of boredom that there was a protocol in this regard. In Infolibre they demonstrated its existence by reproducing in its entirety the Ayuso government’s protocol prohibiting the transfer of patients from nursing homes to hospitals.

A few days later, the Health Councillor admitted that a “draft” was sent “by mistake” that asked not to refer elderly people in serious condition to hospitals. And they continued to make a big deal out of the fact that it was a draft for several days.

It is shameful that these pathetic squabbles are staged to deny things that are as obvious as they are demonstrable. And the worst thing is that the media go on moulding what they call “public opinion” to stretch the circus and we continue to enter the fray in circular, partisan discussions, rooted in the most disgusting fanaticism.

In February 2021, the former advisor to the Government of the Community of Madrid on Covid-19 and former director general of Hospitals of the Community, Antonio Burgueño, said that users of nursing homes “were not well cared for” during the height of the pandemic and that “the order was not given” for them to be assisted by doctors.

It wasnot a draft, it wasa signed document. It was a criminal botch-up.

I remember it as if it were yesterday, because it was yesterday. In those days, I kept reading and hearing that when this was over, all those in charge had to publicly assess their management in order to purge responsibilities and account for possible errors and/or negligence.

But not only in Madrid, it would be fair, necessary and healthy to open a commission of enquiry that would go beyond the merely political in each and every one of the communities of this Cainite political scenario that is unbearable. From the smallest town hall chair to the most luxurious armchair in Moncloa.

Today, World Elder Abuse Awareness Day, rallies in several cities have remembered the elderly (our elderly) who died “through neglect and negligence” in nursing homes during the pandemic.

Ossorio and the poor

The PP returns to the centre