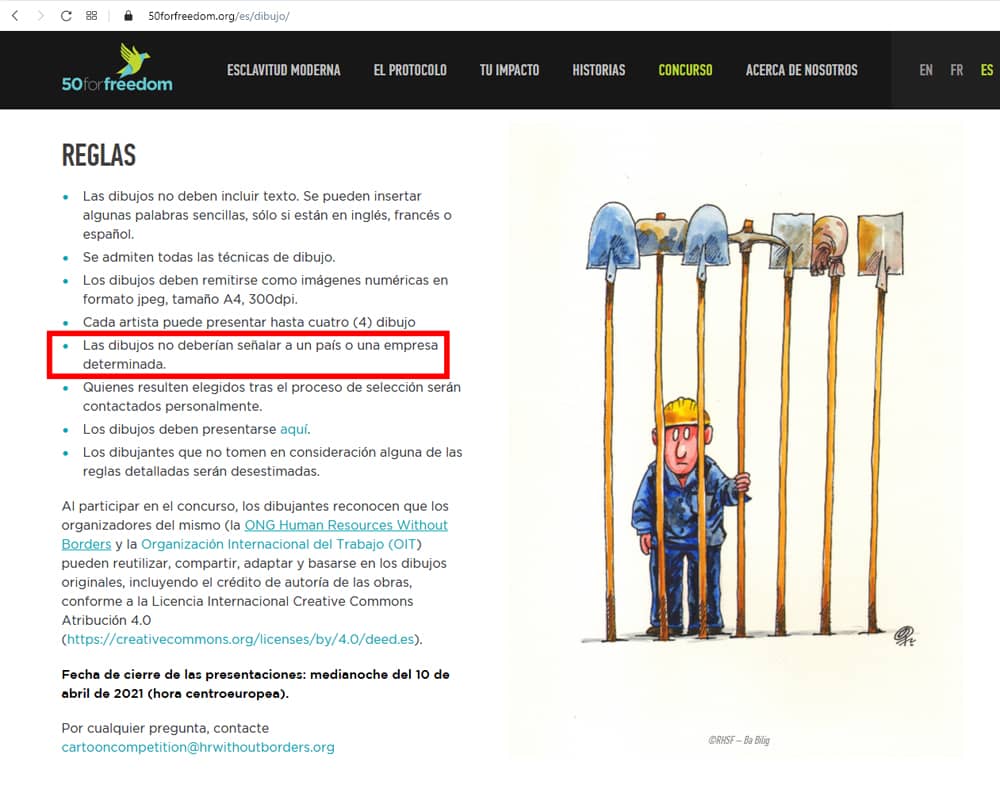 The NGO Human Resources Without Borders and the International Labor Organization (ILO) are organizing a graphic humor contest against forced labor and in one of the points of his rules you can read in spanish:

Although the conditional mode is used, from which it could be deduced that this is a suggestion, it does not take a very clever person to imagine where the sent cartoons that allude to a certain country or company will go.

In its English version it is requested without conditional, so I deduce that it is an error in the Spanish translation and definitely cannot cite countries or companies:

The same situation with the Portuguese and French versions.

Fernando Morales-de la Cruz, founder of Cartoons For Change, asks in public why the ILO “sponsors a “freedom” contest that censors cartoonists and artists”.

I hope he gets a response, they rethink that point and remove it. Although the mere fact that it existed is already reason enough to not participate in the contest.

Thank you for your prompt attention to my complaint. Pls don't confuse the official position of the @UN/@ILO with the freedom of expression & independence of cartoonists & artists. For all of us, Article 19 of Universal Declaration of Human Rights is the tool to end exploitation. pic.twitter.com/YhmNWtQmhr

Well, rather than answering, they digress to say nothing and claim to defend the impartiality and independence of the United Nations. Where is then the independence and freedom of expression of the cartoonists, as friend Fernando reminds him by quoting Article 19 of the Universal Declaration of Human Rights.

Article 19.
Everyone has the right to freedom of opinion and expression; this right includes freedom to hold opinions without interference and to seek, receive and impart information and ideas through any media and regardless of frontiers.

It makes no sense, it is absurd. The cartoons are the personal opinions of their authors, if they are limited preventing them from expressing themselves freely, they should not call it a contest and commission the drawings to a closed script to any friend willing to be the payer who speaks through his mouth, imposing an “official” discourse and style.

Imposing or even suggesting this limitation is the equivalent of asking the authors to make any generic “white” cartoon to look “good” and not to bother those ultimately responsible for ending the problem.

What they are asking is that no one responsible be disturbed.

Do they believe that forced labor originates and takes place in a parallel universe where there are no countries or companies that benefit from what they produce and we consume?

To stop at the outset any criticism of the government of a country for not fighting and eradicating child exploitation, forced labor or any other slavery practice, thanks to which hundreds or thousands of companies around the world get rich, is the equivalent of spitting in the face of the essence of the profession and those who suffer these abuses.

We can call this in many ways, but it goes against the critical spirit of the exercise of humor and or the satirical illustration.

Entities that organize and collaborate.

I find it very strange that Cartooning for Peace agrees with these bases, I prefer to believe that they haven’t read them yet. Also take a look at the organizations that are part of 50forfreedom.

By the way, the awards look like they will be paid in the now traditional “visibility” currency.

No rectification, even worse

16/03/2021. They update the text of this point in which they make it clear that the freedom of cartoonists does not go with them and that as all companies and countries are involved, none of them can be cited. And they call this “neutrality”. Shameful.

One day I will tell you the different reasons why I have not participated in cartoon contests, especially in this kind of contests, for many years.