Interview by Raquel García / Caricature: Fran Cornejo /published on 05/08/2015 in nº 2 of the magazine MLPZ of the now defunct website milapiz.es

Arcadio Esquivel Mayorga was born in Alajuela, Costa Rica, on 10 January 1959. He is a professor of Caricature Studies at the University of Costa Rica. 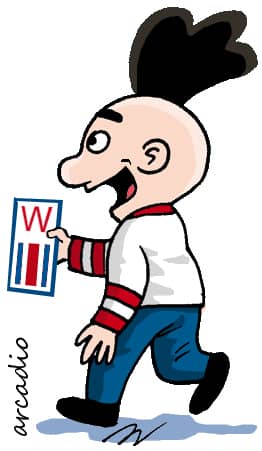 From 2001 to the present he has been producing and hosting an educational programme on Channel 13. His teachings can be seen in  Youtube. He wanted to be a civil constructor and graduated in 1979. This is the beginning of a long relationship with graphic humour. Among the subjects he studied was technical drawing, which led him to realise that he was good at it, that he liked it too much.

And in 1982 he obtained the title of Cartoonist from CEAC. Tireless, he combined new studies with those he already had. Now it was the turn of advertising design. Later, in 1999, he graduated in Commercial Design. In the meantime, he not only filled his head with knowledge, but he has also had time to publish more than 14 books with humorous strips, among them, “Las aventuras de Wenceslao” .

He has won numerous international awards, such as the Silver Medal of the Primera Plana Club in Mexico in 1988 for his contributions to peace through caricature. Some of his works are in the permanent collections of five museums in the USA, France, Peru, Turkey and Germany. He was also a member of the Cartoonists and Writers Syndicate in New York from 1986 to 2003, from where he sent his drawings to various newspapers and magazines.

Is it easy to be a cartoonist today?

It was with the infinite boom of new and daily cartoonists on the internet, the possibilities of obtaining good remuneration diminish drastically. It is more feasible if you have the economic backing of a lucrative profession to be able to maintain your other artistic activity, that of a cartoonist, which is my case, as a professor at the University of Costa Rica.

Are cartoonists in Costa Rica suffering from the economic crisis?

The economic crisis is upon us, many of my colleagues here have now dedicated themselves to more lucrative work, as designers, teachers in schools, private classes or any activity that generates income.

This is a situation that is repeated in many Latin American countries, and there are even publishing agencies in the USA that are facing the crisis with some adjustments that have affected artists.

How does a cartoonist in your country try to make a living from his profession?

It is very difficult, one might think that the cartoonist is not well paid for what he does, but the problem goes beyond poor remuneration. Newspapers have given up hiring cartoonists because of the adjustments in their payrolls, as is the case of La Nación, La República and La Extra, the three largest newspapers in Costa Rica.

Who are your favourite artists in your country?

Of course, since I was a high school student I was already in contact with one of Costa Rica’s most emblematic artists, Don Hugo Díaz Jiménez, a cartoonist who was very committed to social causes and with his characteristic humour of the people. He taught me how to draw a caricature and create monigots; I learned a lot from him, he was a great school for me.

Shortly afterwards, when I joined one of the most important newspapers in Costa Rica, La Prensa Libre, as a cartoonist, I shared editorial space with the other great of this country, Mr. Gerard Chavarría, known as Kokín. It was another great experience, as I learned even more about my profession from this fine artist. Both are gone now, but I am left with a very important legacy. 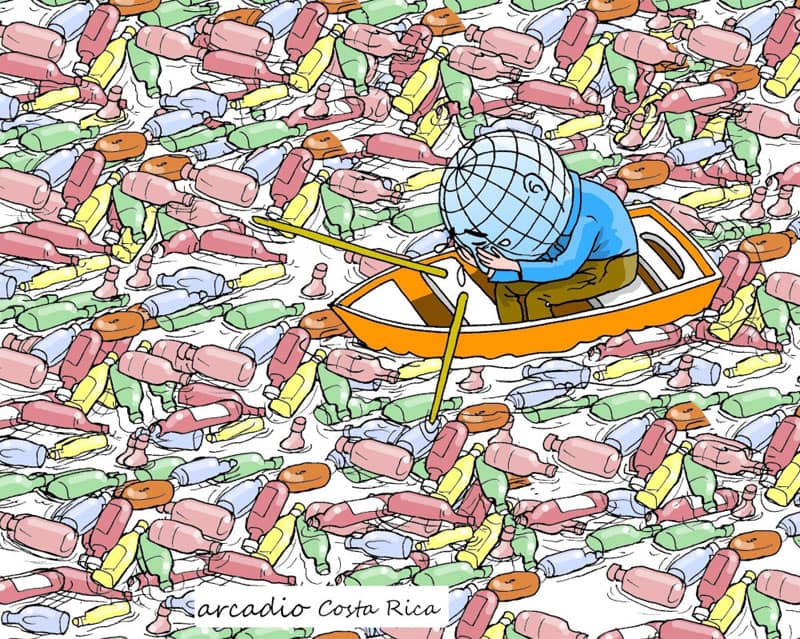 Have any of the strips or cartoons you have done directly or indirectly caused you any kind of problem?

I have always been very focused when it comes to my cartoons or strips, there were people who got upset and protested because they felt they had been alluded to, but nothing of any importance. The most serious problem I had was with the newspaper La Nación (Costa Rica).

“When I took the caricatures to the chief editor, he used to take them, crumple them up and throw them in the trash, without even looking me in the eye”.

When I took the cartoons to the chief editor, he used to take them, crumple them up and throw them in the trash, without even looking me in the eye while I was in his office, just like that. He did this to me on three occasions. As time went by, I realised that these things prepare you for whatever comes in the future, you come to understand that you don’t have to be afraid of anything.

Do you think there is any subject that can’t be dealt with in a comic strip?

Some, at least here in Costa Rica. Homosexuality, some aspects of religion, immigration, for example. It’s not that they can’t be dealt with, it’s just that you have to be very subtle to do it.

Taking advantage of your incursions and international experience on one side of the Atlantic and the other, have you noticed any difference between the graphic humour that is done in one place and the other?

Yes, I have noticed and I find many differences. In Europe there is concern for issues such as human rights, poverty in Africa, women, children, immigration, among other topics, and in many competitions these are recurring themes.

In America I find a lot of caricature of marked ideologies, of the right, of the left, complaints about poverty, against corruption, but the biggest differences are in the way of saying things, the European is acid and very strong in his criticisms, here in America he criticises harshly but with a more benevolent graphics, but in an equally direct way. I notice a more academic graphic development in Europe than in America, more training of the artist in graphic humour there than on this side of the ocean.

Finally, there is more interest from European artists (I see it a lot in Spain) in the development of comics than there is in Latin America, in fact I know that there are countless pages and magazines dedicated to spreading it, while here you can count on the fingers of one hand the successful magazines of that kind.

On the other hand, do you have a strip that for some reason you have a special affection for, and if there is one, could you explain why?

As a cartoonist, are you ever afraid of running out of ideas? That blockage in front of a blank piece of paper?

What I fear most is running out of memory, in my family there have been cases of Alzheimer’s, that worries me, I pray to God that I will always be lucid, have the necessary strength and my hands in good condition.

Would you like to break any clichés about the way graphic humour is seen?

Yes, I would like to. Basically in two aspects, the first is the view that people have of the cartoonist, light and without enough weight to change the world. I notice it in each of the cartoons we publish, people laugh and comment, but the politicians are still going about their business, doing their political dirty deeds, nothing changes. That makes me despair.

The second is the professional aspect. There is a bad habit, at least here in my country, of believing that a cartoonist can be asked to do some work and that applause and flattery will be enough to be considered paid. This is not so, the caricature artist has the right to be paid if his services are requested, without delay and in a fair manner, or is it that they believe that the families of the artists of humour live on some food that flows from the sky?

Among the prizes and awards he has won, there is one in particular that has caught my attention, the Silver Medal of the Primera Plana Club in Mexico in 1988 for his contribution to peace. Can a simple cartoon help to make this world at least a little better?

No, not a single cartoon. Maybe a large number of them pounding over time in the reader’s mind, that’s what the award you mention took into account, they rewarded that part of my production that referred to the theme of peace. That involved a lot of vignettes.

I like the recognition of the people, this gives you fuel to continue in your work, it doesn’t matter if you have money or not, if you have a modern car or not, (we know that graphic artists are always lacking). The public bases your power on the capacity you have to produce your work and with it, to make you think. I don’t like unfair competition, that if you are an artist in a newspaper or in a gallery, someone is conspiring to take your place, that bothers me. 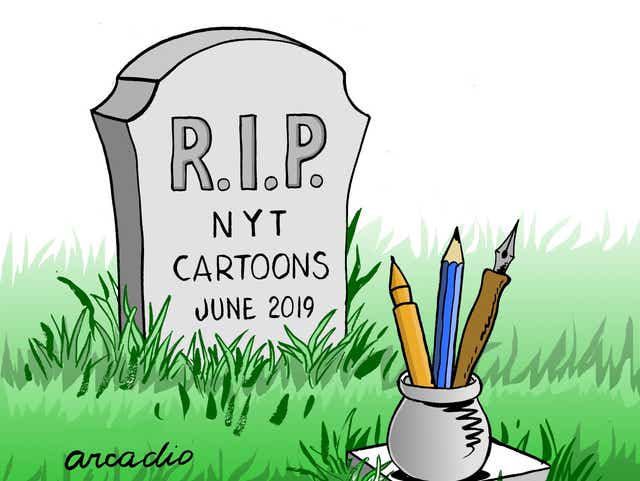 In those early years, how does one go from being a child who, I imagine, always liked to draw or paint to making a living out of it? Is it easy to take that step?

Well, I wasn’t thinking about being an artist, I was graduating from a technical college as a Civil Constructor (someone who builds houses) and as the degree included technical drawing in parallel, I felt attracted, too much I would say, because it was very easy for me, so I entered university straight into Fine Arts. But from being in a technical career to going on to a career in the arts, it was a diffuse transition, I don’t know at what point I made that decision.

You have a lot of educational books, how do you organise your time for such an extensive production? Have you had to sacrifice anything to be a cartoonist?

Of course I have had to sacrifice a lot, I don’t go to the beaches, I don’t go to parties or concerts, although of course I go with my family to many other activities, cinema, cafés or visits to relatives. But, I have disciplined myself to fit my time in between preparing the comic strip, preparing and revising university classes, arranging what will be the recordings of my show on Canal 13 every Sunday, doing my political cartoons for the international press, drawing and painting for the odd exhibition and writing.

All this is a challenge in a world that offers so much to entertain.

Finally, I would like to know, is it easy to teach how to paint, how to draw? Following on from this, can anyone learn and become a good artist?

It is easy as long as the learner is receptive and follows the indications and has ambitions to be an artist, as well as aptitudes, but it is difficult if you teach a person who, in addition to not fulfilling the above, was not born with the gift of art. But of course, it doesn’t mean that those who are not gifted will not learn, everyone can do it, only that the one who is born with the gift of the artist could change the world and the one who is not, will only be able to make a good impression.