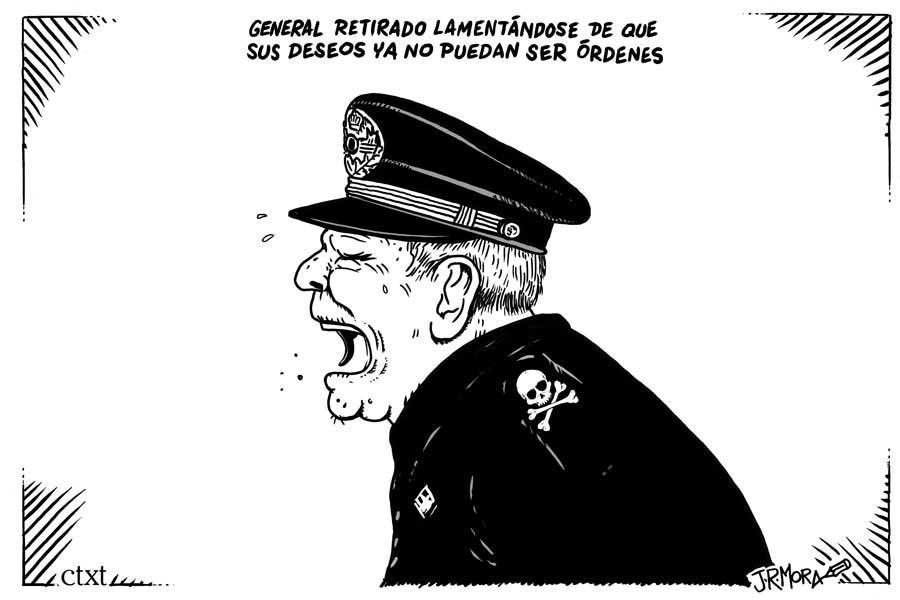 “Retired general lamenting that his wishes can no longer be orders”.


A WhatsApp group formed by senior military commanders who signed a letter to the king uncovers the affinity of some of its members with the far right and Francoism From the mobile phone of the person who heads the letter to Felipe VI, the former Major General Francisco Beca, this message arrived in the chat…
I don’t think I can add much more on the subject that hasn’t already been commented on and recommended, but as opinions are like asses and I have one myself, here goes.

I’m afraid this is going to end up like that chat about funny Nazi stuff from the munipas of Madrid.

A few municipal police officers got their noses all hot in a WhatsApp group. The usual, the usual thing that these kind of idiots do on any given day. One of them made the messages public and three of the members of the pack had their badges and pipes taken away. The person who uncovers the matter receives threats, while the police unions talk about it being a private matter.

I hope that there is not a single countryman left who is still surprised by the existence of these coup-worshipping, state-murdering back-stabbers. At the time, some media took to calling them “nostalgics” so as not to create enmity in the well-placed parish of Franco’s legacy, allowing a subliminal tinge of romanticism and legitimacy to creep in and connive with any branch of fascism.

And the fact is that with these issues we have a big problem with the measures of the stick. Desiring the death or torture of someone, even genocide, and expressing it in public or in private is still not a crime, unless real intentionality is demonstrated and the action is being organised to carry it out or you are caught committing it.

Nor would it be a crime to call them bastards for defending the wall for the ideological adversary, but you have to be careful with that too, lest some judge considers that you are offending them beyond the norm.

In between are the “hate crimes”, which are often debatable, related to uncouth demonstrations, but that is best left to the legal experts in the field, who do not have an easy job.

“Right-wing populism”.
“In the future, ours will be reduced to an etymological discussion”.

Of course, beware of saying what you will about the Bourbons or making a joke about something as ambiguous and abstract as religious sentiment, because they have their own laws to make you feel bad.

A retired military officer is like a corrupt politician expelled from the party, the organisation feels free and exculpated of any sin of thought, even of deed, by the grace of “no longer being”. Although they can walk around with their medallions pinned on their breastplates like respectable public servants at very official events.

And the fact is that those military riflemen were and are, regardless of whoever it may seem, the roots that made the quarry grow. The dregs are the dregs. And that is what they managed to impregnate. Denying it or downplaying its importance will not make something that has always been there disappear. Nor can the sterile and boring debate of evil generalisation be absent.

If there were a hundred or ten elements in my guild with the ideas of a repressive and genocidal satrap, I would have no problem with it being a topic of conversation. If there was just one, I’d have a lot of them. I would be even more concerned that nobody would do anything to make his murderous ideology disappear until it became a necessary bad memory.

Martín Morales’ family donates 15,000 originals to the University of Granada