Skip Williamson, an annoying pimple on the culture’s ass

On March 5, Jay Patrick Lynch (1945) died and shortly after, on the night of Thursday, March 16, Mervyn “Skip” Williamson (1944), considered one of the architects of the alternative comic movement, died. Both deserve to be reviewed and remembered, although today I will dwell on Williamson’s story.

Skip Williamson, was an anarchist author of the 1960s counterculture who joined the International Youth Party, known as the Yippies. And he defined himself as follows :

He usually sets the beginning of his professional career in 1961, when he sold his first cartoon to the satirical magazine Help! founded by Harvey Kurtzman after leaving MAD magazine.

Review in the magazine Cartoonist PROfiles

He was a prolific creator and collaborator in the growing network of alternative publications formed by small comic fanzines made with mimeographs in garages and basements.

His drawings were published in the fanzine Wild! edited by Don Dohler and Mark Tarka. At that time Art Spiegelman had created the fanzine Blasé.

Skip would end up creating his own, which he named Squire and where pages by Jay Lynch and Art Spiegelman were also published.

There’s a lot more to read about the history of American alternative comics.

Skip Williamson and Jay Lynch created the magazine Bijou Funnies in 1968, one of the emblematic publications considered a pioneer of the American underground. 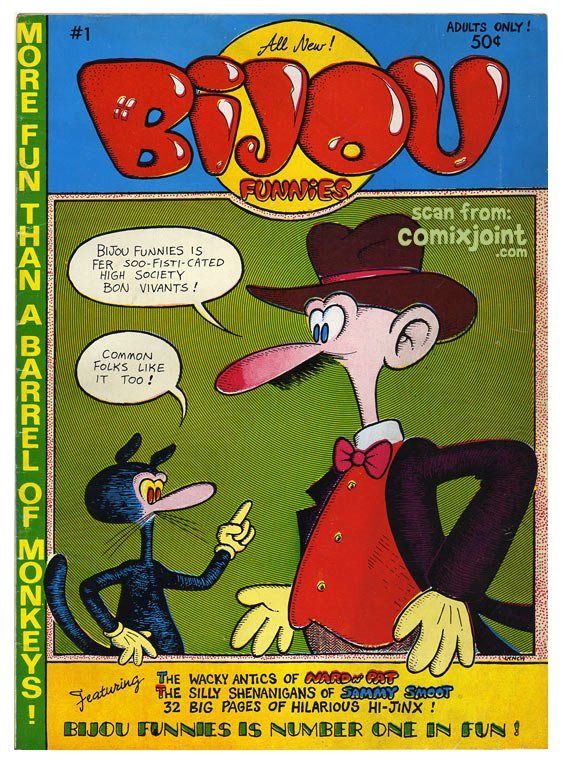 It was published in Chicago, and eight aperiodic issues came out between 1968 and 1973 with works of the group formed by Jay Lynch, Skip Williamson, Jay Kinney and Robert Crumb together with those of other outstanding authors such as Gilbert Shelton, Art Spiegelman, Justin Green and Kim Deitch.

Bijou Funnies, which was born with evident and declared influences from MAD magazine, is considered, together with Zap Comix, one of the key publications for the birth and proliferation of the underground comic in the USA. It published stories of mythical characters such as Snappy Sammy Smoot (Skip Williamson), The Fabulous Furry Freak Brothers (Gilbert Shelton) and Mr. Natural (Robert Crumb)

The Comic Journal publishes this tribute and rescues an interesting and extensive interview from its January 1986 issue 106, in which Skip relates the origin of Bijous Funnnies:

“Jay’s an old friend. We started out in the fanzines together, corresponding with each other. This was when I was 15, 16 years old, and the only reason I moved to Chicago was to come up and be with Jay, and start a magazine of some sort. He originally had the idea, and this was before the advent of underground newspapers, around 1963 or so, of publishing something called the Old Town Underground Newspaper. We never did”.

“When I did finally move to Chicago in 1967, we started the Chicago Mirror together, which was kind of a magazine somewhere between the Realist and Mad. It had a lot of psychedelia in it, too. After we did that for three issues, we said, “Hey, we should be doing comic books.”

“Robert Crumb had come out with Zap and Gilbert Shelton was about to publish Feds ‘n’ Heds, so we converted the Mirror to a comic book, named it Bijou, and that’s how the whole thing began. Anyway Jay’s always been a strong influence, and a partner. We see each other less now, but we talk on the phone all the time.”

Of the three numbers of the Chicago Mirror, Bijou’s predecessor publication, there are only a few copies and some are in a rather poor state of preservation due to their modest print run (about 800 per edition). 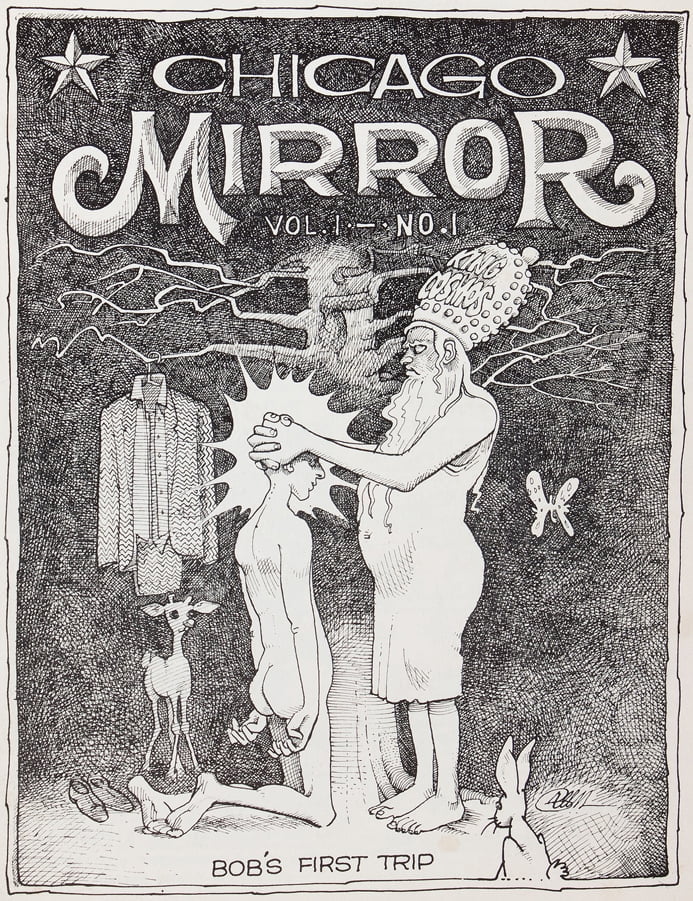 Sex, drugs, violence and other scatological issues were the recurrent themes in the underground comics of the 60s and 70s.

His most popular character was Snappy Sammy Smoot, a guy with bulging eyes, black hair, thick lips and a little moustache. Skip tattooed him on his left arm.

The story of this comic book supporting the so-called Chicago Seven (initially eight), related to one of the many trials against activists of the time, is as interesting as it is diffuse.

Skip Williamson had illustrated in 1971 the well-known book by Abbie Hoffman , Steal this book , possibly the most radical counter-culture book of the 20th century, so perhaps legend has it that Abbie Hoffman (also among the defendants) gave Skip Williamson an advance on the money from that book to produce a comic book to raise funds to help pay for the defence of the Chicago Seven.

The comic was published in 1969, almost two years before Hoffman presented Roba este libro, so it is unlikely that Conspiracy Capers was financed with Hoffman’s advance for Roba este libro, since the book was rejected by all the publishers and finally published with the money contributed by Hoffman’s friends.

The print run of Conspiracy Capers is also unknown. It is believed that between 5,000 and 10,000 copies were printed. In addition, it was a single edition, so it is very likely that not much was raised from its sale.

What is remarkable about this publication is that it was the first time that a comic book was created with the intention of financing the legal defence of a group of people who were prosecuted, a very risky bet in turbulent times.

Signature detail. Some pages of the comic Conspiracy Capers

The comic was published by “The Conspiracy”: Kathleen Cleaver (treasurer) and Susan Sontag.

Sontag was an essayist, novelist and film director and Cleaver, wife of Black Panther Party leader Eldridge Cleaver, served as the party’s spokesperson and press secretary. Some believe that Susan Sontag was one of the people who financed the publication of the comic.

The truth is that it is not known if it was one or several people and the amount that was invested, nor are there many clues about what was collected by the Chicago Defense Fund.

Skip Williamson also drew caricatures and cartoons in the room where the Chicago seven were on trial.

During the 1970s and 1980s, Williamson worked on what some then still called “gentlemen’s magazines”. He was art director of Gallery magazine and created the “Girl Next Door” concept by publishing photographs of brides and wives sent in by readers. He was art director at Hustler, encouraging Larry Flynt to “make it dirtier”.

In 1976 he joined the staff of Playboy magazine, although he had previously worked for the magazine. There he created the popular “Playboy Funnies” section. As Art Director at Playboy, Williamson received numerous awards for design excellence, including the New York Art Directors Club’s Gold Award. 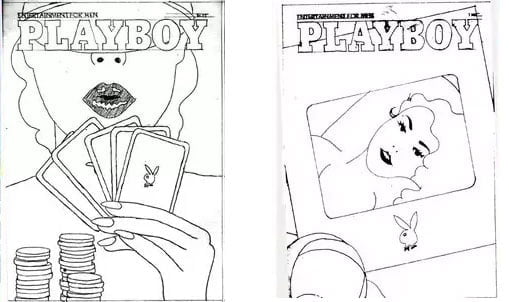 In July 2012 he published in his Devianart account (where you can also read some of his texts) some sketches for the Playboy magazine with this note:

“Playboy Cover Ideas (circa 1979ish). When I was at Playboy the art directors were asked to submit 3 or 4 cover ideas a month. If the ideas were approved by Hef the thing would be published. Mine never were.“.

Skip Williamson’s works have been exhibited at the Tate Museum of Modern Art (London), New York Cultural Center (NYC), Maryland Institute of Design (Baltimore), the Corcoran Gallery (Washington DC), the Lucca Festival (Lucca, Italy), the Chazen Museum of Art and the Art Institute of Chicago, among other venues. His works have been auctioned at Sotheby’s and Heritage. In his last years, he painted large canvases with themes of social and political criticism. These works were exhibited in galleries in Portland OR, New Orleans LA, Los Angeles CA, New York NY, Atlanta, Philadelphia and other cities. Sources (1) (2)

Pigheaded, a documentary about his life and work 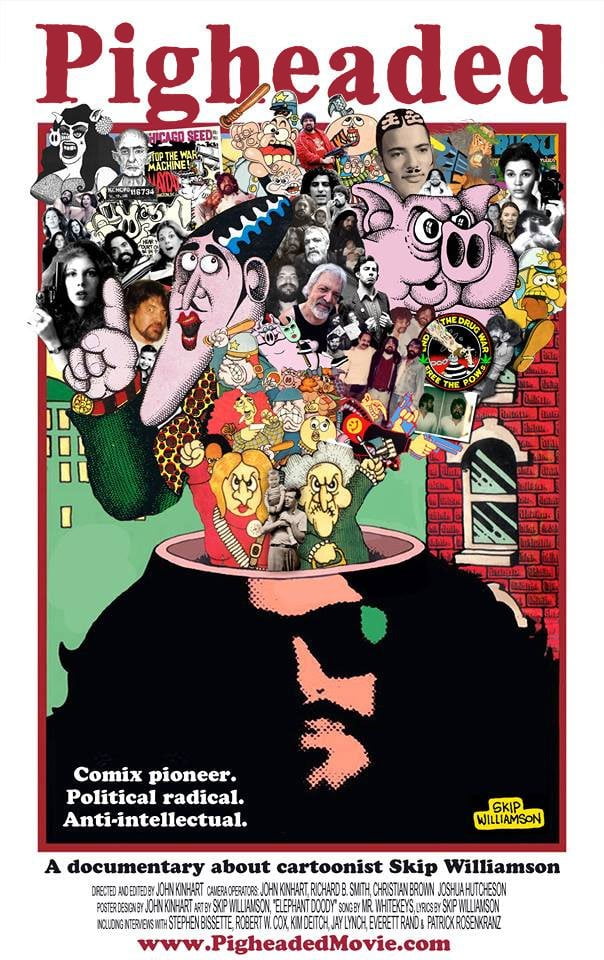 A documentary that began filming in 2008, titled Pigheaded, premiered at the Newburyport Documentary Film Festival on September 17, 2016 , reviews his life. The documentary can be rented or bought on Vimeo.

Help for a ruined widow

His fourth wife, Adrienne Morales, who claims to be unemployed, opened a petition for help at GoFundMe on 22 March (capture). Under the title “Helping a financially broken widow” she is asking for donations to help her pay her bills and get by during the month of April. Fortunately she is receiving a very good response from friends and fans.

Persinger’s scrapbook, a decade of Great Depression-era drawings and memories 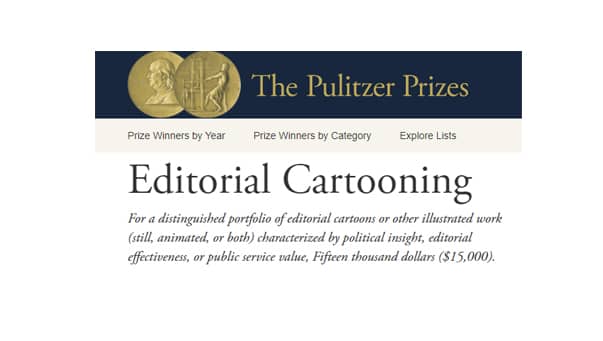 And the 2021 Pulitzer Prize for editorial cartoon is for…