What is also known as “Texting While Driving” (texting while driving) seems to be a much more serious problem in the USA and other countries than it is here (for the moment). In any case, the data europe’s mobile phones are not very good either.

Many of those who practice it end up crashing their car into anything. On Youtube you can find hundreds of videos of bikers filming drivers who drive while chatting, surfing or talking on the phone, and they are reprimanded for their behaviour.

According to figures from the National Highway Transportation and Safety Administration(NHTSA), there were 17,775 fatalities in the first half of 2016, an increase of 10.5% over 2015.

Despite existing laws in most states banning mobile phone use at the wheel and tougher penalties, the NHTSA says that the percentage of drivers manipulating their mobile phones or other internet-connected devices while driving increased from 0.9% in 2010 to 2.2% in 2014.

The National Safety Council (NSC) estimated that more than 40,000 people were killed in traffic crashes in the US in 2016, the highest number in nine years, and 4.6 million were injured and required medical care.

While it is not easy to determine the exact % of cases in which distracted mobile phone use is the direct cause of accidents, the number of drivers who admit to using their gadgets while driving is increasing.

An NSC survey published in February 2016 found that, despite more than eight out of ten respondents admitting to being concerned about road safety, 47% said they were comfortable texting or voicemailing while behind the wheel.(Source)

So many people are discouraged that there are campaigns, some of them supported by celebrities, to raise awareness of the dangers of hitting keystrokes in the car.

A comic strip that changed a law

There are spontaneous initiatives that get results. In 2015, cartoonist Harold Jessurun and scriptwriter Aníbal Quiñones got his character “Pepito” to jump from paper to real life to influence changes to a law in PuertoRico.

To do this, they wrote a letter signed by “Pepito” to Jaime Perelló, president of the Puerto Rican House of Representatives. They asked to be concerned about this serious problem and to increase the advertising budget for prevention campaigns.

In addition, they drew a series of strips for the newspaper Última Hora, which were published as a daily series for three weeks, telling the story of how “Pepito” was run over by a driver who was looking at his phone. The series ended with Pepito’s recovery process after coming out of his coma. 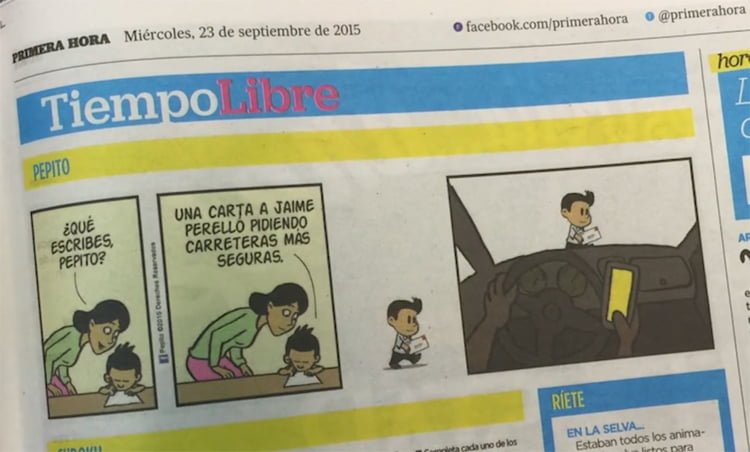 Finally, the amount of penalties was modified, with a five-fold increase in the amount of fines and 10% of the proceeds to be used for educational campaigns against “Text and Drive”. 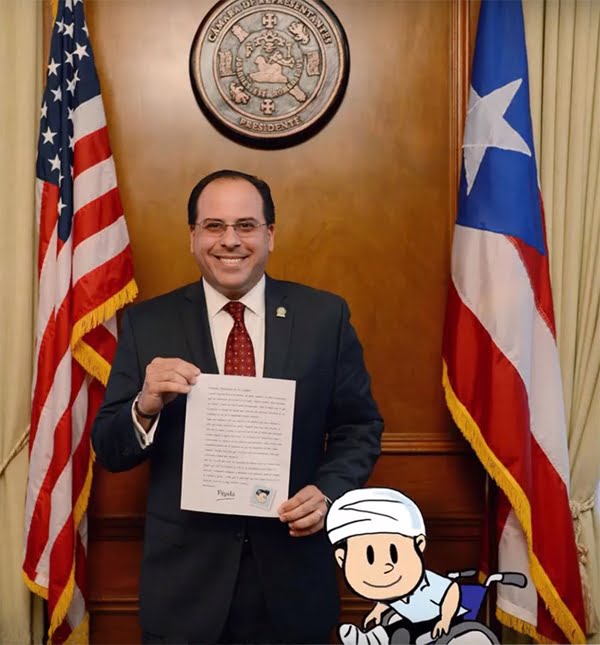 Perelló poses with Pepito’s letter next to the recovering character.

A video summary of that story. Here in Spanish.

According to 2016 figures from the Puerto Rico Traffic Safety Commission, 7 out of 10 people admitted to using a mobile phone regularly while driving.

This practice is the second leading cause of traffic accidents in the country, causing more than 50,000 accidents a year on the island.

Paradoxes of the press. In 2017, the newspaper Primera Hora fired the authors of the strip “Pepito” following complaints from some politicians.

Cartoon originally published for Patreon subscribers. If you also want to lend a hand and support the creation of these grids, click here: