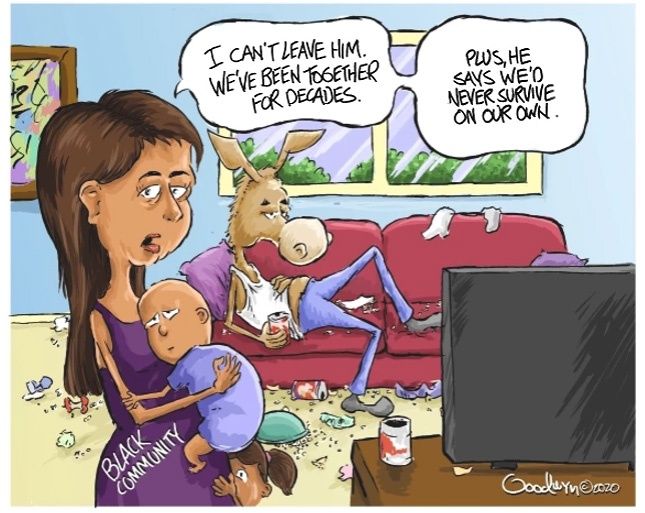 Cartoon that prompted The Journal’s apology

The newspaper The Journal of Seneca, South Carolina, published on Wednesday 10 June this cartoon by the cartoonist Al Goodwyn, who declares himself conservative. Some readers sent their complaints to the newspaper or posted them on social media pointing out the image’s message as racist.

Others even sent a copy of the cartoon along with their complaints to TV channel WYFF 4 (see with VPN) criticising the cartoonist’s message that the Democratic Party has “abused” the African-American vote by using and perpetuating all racial and gender stereotypes in an “insensitive and harmful” way.

Another viewer, a retired military man, adds: “I am sad, angry and appalled that this kind of casual racism is still on display in a place I used to be proud to call home”.

In the cartoon by Goodwyns cartoon, an author who has been active since 1989 and has worked for the Washington Post, the Washington Times and the Washington Examiner, depicts a family in which the man, drawn as a donkey, a symbol of the Democratic Party, is shown lying on a couch. He is surrounded by food waste and holding a can of beer, watching television. In the foreground, the woman labelled as the “black community” with two small children is depicted explaining to the viewer why she cannot leave her husband.

-I can’t leave him, we’ve been together for decades.

-Besides, he says we’d never survive on our own.

The Journal immediately responded announcing on Twitter that they were drafting an apology and that it would be published on Thursday 11 June in the medium. And so it was, a pop-up window with the text“We’re Sorry” linking to the text of the apology greeted visitors to their page.

In a lengthy statement, they describe the publication of the cartoon, which they consider offensive, as an error and announce that they will no longer publish any more cartoons by Al Goodwing. They blame the error on haste during the closing of the edition due to the work of monitoring the results of the primary elections, which are being held in five states.

They assure that the cartoon, which was probably also published in other newspapers, does not reflect the values and positions of the newspaper and that they will meet with leaders of the African-American community to offer the necessary explanations and apologise.

Statement from The Journal:

Sometimes, there’s almost nothing else to say.

As a newspaper, we are supposed to be a reflection of our community — one community. Not a white community or a black one, but one community. We failed in that yesterday … miserably. We printed a painful reminder of the division we all feel right now.

There are no words we can put here that will erase the mistake that was made Wednesday in publishing such an offensive editorial cartoon.

It is not lost on us the pain and anger that many of you felt. But we own that. It was our mistake, and if you’ll allow us, we’ll do everything within our power to be inclusive and reflective of our entire community.

Political cartoons are powerful tools that are designed to make you laugh or think about a given situation. But they’re not supposed to make you hurt. Wednesday’s depiction of an African-American family did just that.

It made you hurt — many of you.

People are angry with us, and they have a right to be. They want policies changed and someone fired, and we’re going to do that.

We purchased that cartoon and many others from nationally syndicated cartoonist Al Goodwyn. That cartoon may have appeared in dozens of newspapers around the country on Wednesday, but he won’t be working for us anymore.

Procedurally, this was a terrible mistake. On a normal night, the newspaper is finished early and several people read over it. But Tuesday night was election night, and with results coming in so late, we weren’t finished until well after midnight, and the pages weren’t reviewed with the normal attention to detail. Even the editorial centerpiece on the page was a “Guest View” from another newspaper.

In short, we rushed and we skipped part of our own internal controls, and we know better. Moving forward, all cartoons will have to be approved prior to being placed on our pages as well. They’ll be treated the same way a story gets treated.

On Wednesday, we met with several leaders from the African-American community to apologize and explain, and we want you to know that our doors are open — and our hearts are as well.

That cartoon does not reflect the views or the values of this newspaper, its staff, management or ownership.

We sincerely apologize for the cartoon, and we hope that you will find it in your hearts to accept our apology, forgive us, and trust us to take the steps necessary to be sure this never happens here again”

As I finish writing this, the cartoonist has yet to comment on the criticism and the paper’s decision.The Journal is a media outlet founded in 1903 that comes out five days a week, Tuesday through Saturday, and covers the western part of upstate South Carolina, primarily Oconee County and western Pickens County, including the city of Clemson and its university.

Update. Al Goodwyn has responded to a query from The Daily Cartoonist in these terms:

Thanks, DD. I appreciate you reaching out. The cartoon was not intended to be hurtful; however, clearly it was. I wanted to be respectful with the depiction of the woman and children, portraying their care for each other as sincere and the concern on their faces indicative of the current racial strife they face.

My intent in the cartoon was to project the Democrat party lacking in care and effective measures, yet continuing to be supported. I stand by that intended message. I’ve had emails from those offended which have allowed me to have lengthy, respectful conversations with them on the cartoon’s subject.

Those conversations have given me a feel for the elements of the cartoon that were offensive and I’ll take that lesson into future cartoons.