Juarma López fran Cornejo is an “atypical” cartoonist from a small town in Granada, Deifontes. He does not hide who he is, nor his origins. He works as a hotelier, olive picker, grape harvester or builder.

A livelihood he is proud of and which allows him to draw what he wants, to kick his demons in the ass. What’s more, he studied Hispanic Philology, but it is clear that his true vocation is to draw to express his rage, because if he didn’t, he says, who knows, he would set fire to things.

A different kind of creator who opted for self-publishing, son of fanzines and comics, self-taught in doodling. He has more than fifteen publications, he has participated in numerous exhibitions and his strips have been seen in the satirical magazine “El Jueves”, “Cretino” and “El Batracio Amarillo”. 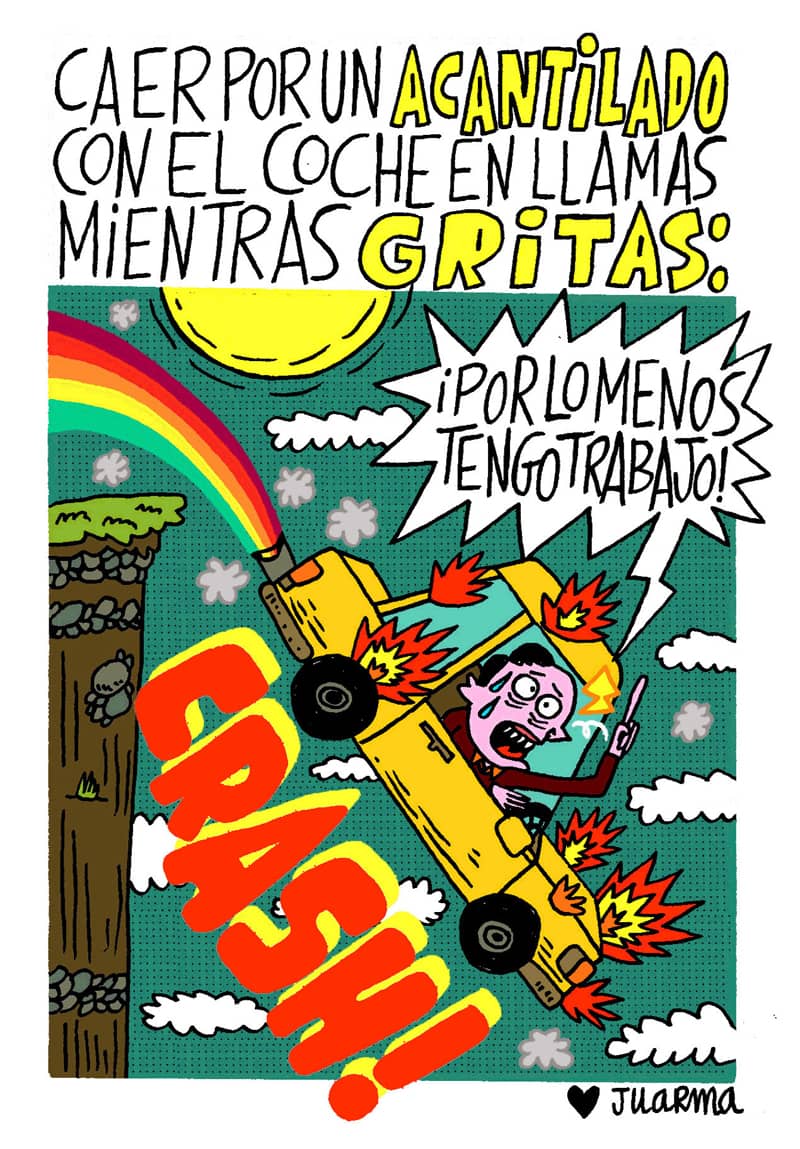 To get into the subject, in an interview you gave to Ideal de Granada in 2012, you defined yourself as “a comic craftsman who draws to let off steam”. And the question is: let off steam about what?

For me, drawing is a way of expressing my anger, of letting it out. If I didn’t do that, I’d still hit everyone or set things on fire. I try to make my anger into something useful. To spit it out in the form of jokes.

I’m a bit disgusted by everything: socialising, facing a disastrous work reality, surviving in a society whose workings I don’t understand… Humour is often the only way I have of facing reality, of kicking my demons in the ass.

In another you say you find it “painful to make a nice joke”, and almost all the humour you see is like that. So, correct me if I’m wrong, you don’t like white humour. And if so, why?

I like humour in general. Especially when it touches my heart or touches my balls a bit. I don’t like humourists who are kind to the reader, who rejoice in a comfortable ideological stance and seek easy applause. At least in Spain that’s the kind of humour that’s in vogue, the kind that survives in magazines or newspapers. Fuck, I know that politicians are sons of bitches and corrupt. I don’t like to buy a comic or a magazine and have the comedians tell me things I already know.

I don’t like goodism or going with the flow and I’m interested in authors who question reality in a different way, because sticking to current affairs and the opinion of the majority seems to me, in a certain sense, cheating. But this is a personal choice. I’m not trying to convince anyone otherwise, and I’m a big fan of everyone having their own opinion.

Going deeper into this question, what does a good cartoon look like for you?

One that makes me laugh, think or makes me angry and doesn’t seek my complicity.

Your characters are not at all idyllic, do you think that those who move away from social conventions, who have more to say, are more interesting?

The reality where I live is not idyllic and the people I come across are very similar to those who appear in my comics. I try to capture that, to reflect the things that are close to me in the jokes I make.

I don’t know if they have more to say than other types of characters, but they always show situations or ideas that can be understood by any of the people I share my life with. 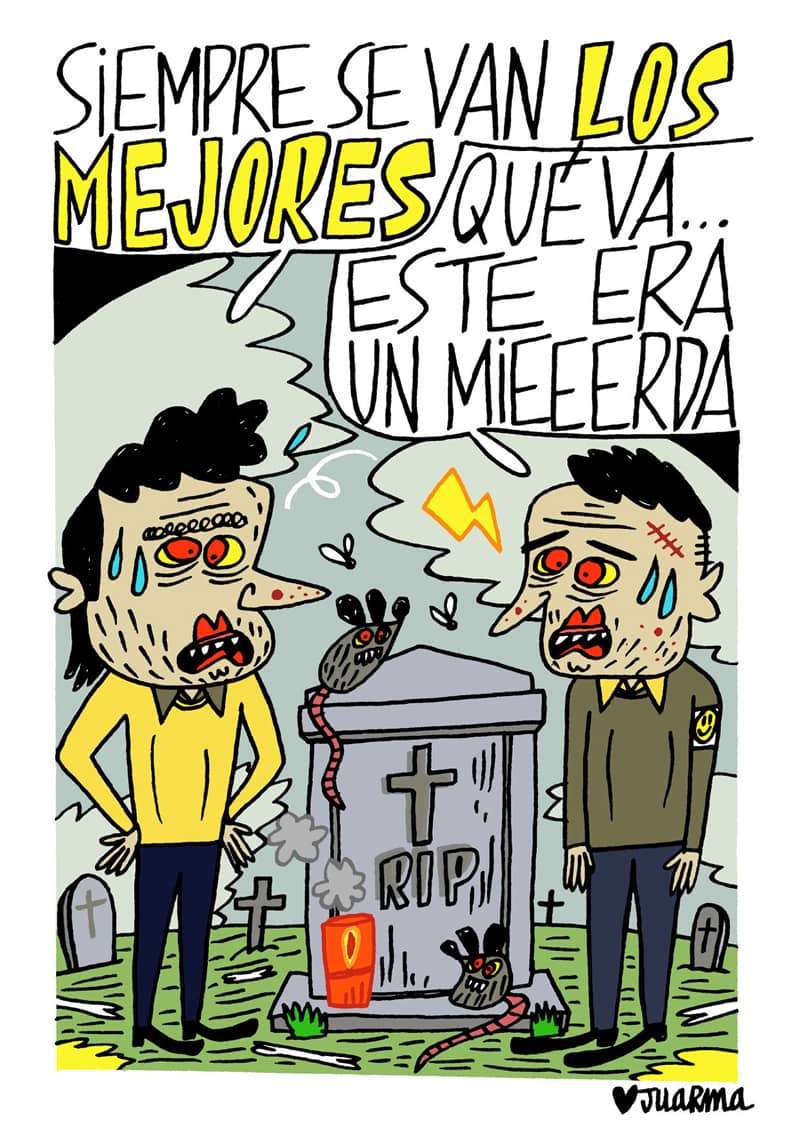 I’ve read that you are 100% self-taught, and that your learning process is based on many hours of work. How have these doodles, born in fanzines, evolved to the present day? They are strong drawings with personality, they have always been like that.

Basically, they continue to express the same things, telling the same things and posing the same conflicts. Now I’m more confident, I know how to handle my tools better and I feel more comfortable, and maybe that’s the biggest difference with respect to my beginnings.

Preparing for your interview, I realise that you don’t hide the fact that you work in whatever you can, despite the fact that you studied Hispanic Philology, picking olives or working on the building site. I imagine you’re not into the “artistry” pose.

There’s nothing to hide. I’m very proud of all the ways in which I make a living. For example, I’m answering these questions from Methamis (France), where I’m in the table grape season.

I don’t really understand the concept of “artistry” because I hardly interact with people who make art. I don’t see the point of posing either. I always try to show myself as I am, with my faults and my virtues. I don’t fit in very well anywhere and I’ve got used to being the green dog in all areas of my life. And I’m lucky in that. 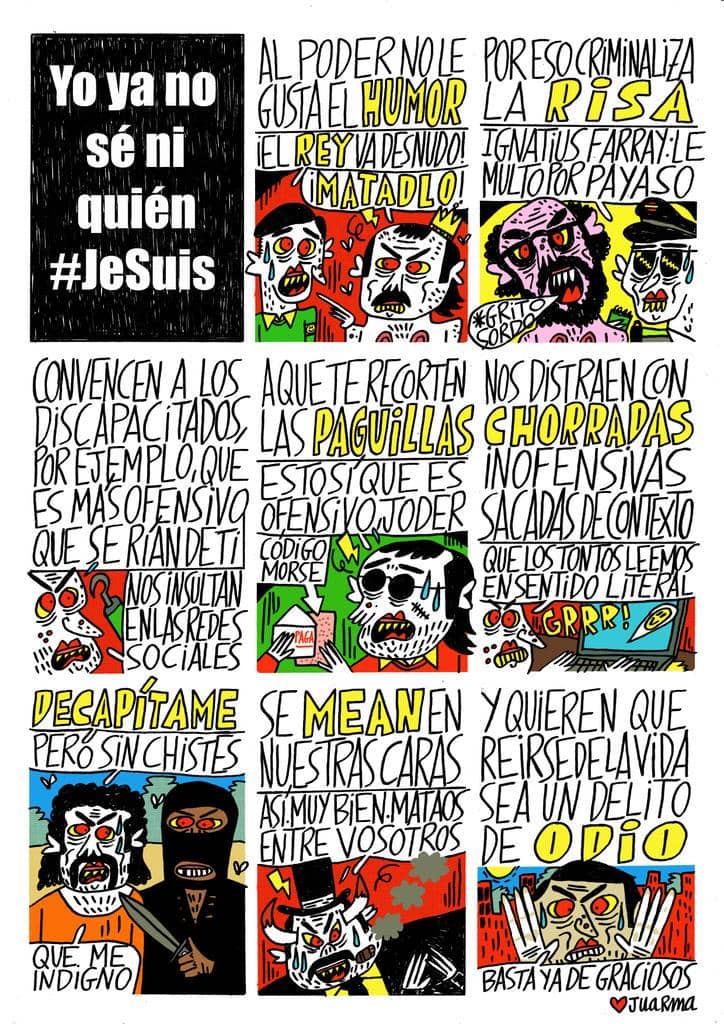 You excel in self-publishing. Specifically, you have more than fifteen works to your credit using this method. Why? In this way you show opinions that the traditional circuits would not publish?

Because it’s easier and more fun, and if I hadn’t started self-publishing I might not even be drawing. On paper I can draw whatever I want. On the internet, which now for me would be something like the only traditional circuit, I’m not free.


Juarma’s López “Carita de gitano con sida” is one of those things you buy with the taste of someone who scratches his arse knowing it’s going to be a fanzine souvenir, a gagging of black humour in many colours.

You’ve worked for El Jueves and I guess I’m not very original, but how did it go at the magazine?

Well, well in some things and badly in others.

There comes a time when I get bored and I really enjoy starting from scratch. I use social networks to have fun and as a kind of notebook where I write down jokes and see which ones can be drawn and which ones can’t. I use them as a way to make jokes. 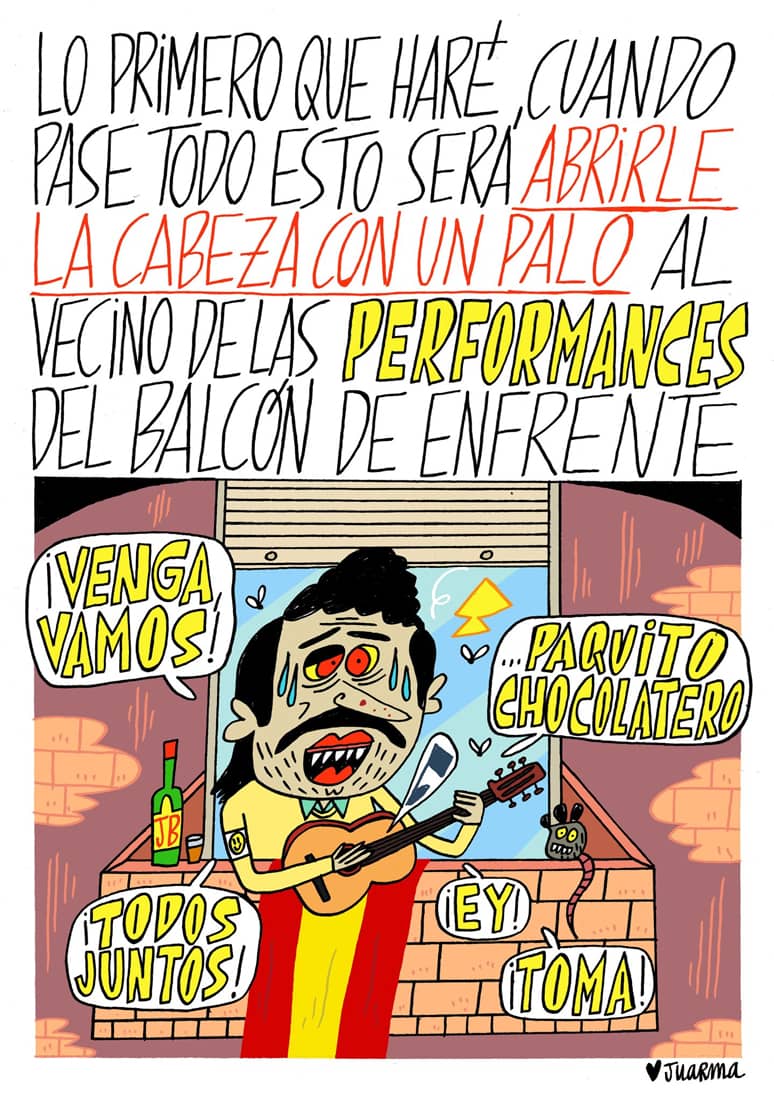 And finally, it’s a somewhat recurring question, but I think it’s good to break with preconceived images. What cliché would you like to break?

Undoubtedly, that the people closest to me would value and know my work. That you can be from Deifontes or from a very humble family and also express yourself freely.