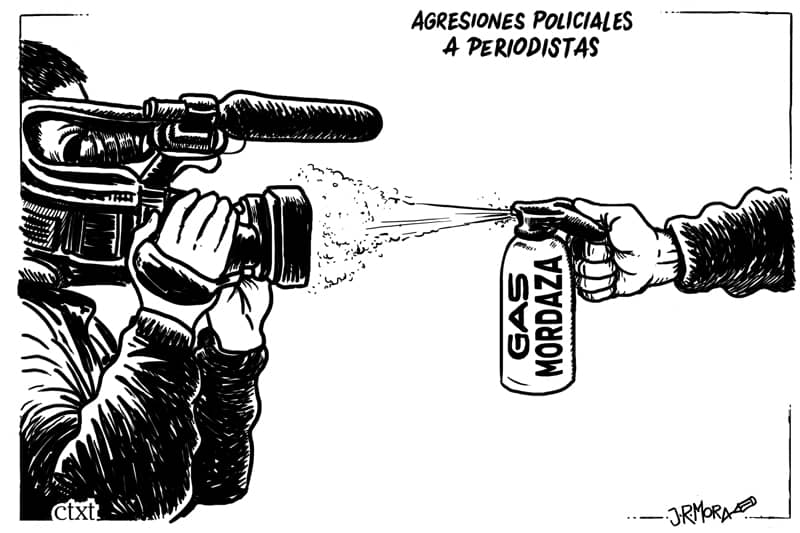 When we see images of police beating up journalists in Turkey or Myanmar, or wherever, we immediately associate that a tyrannical government is using repression to prevent freedom of the press. Not in Spain anymore. Here journalists are required to wear a white waistcoat and a lollipop with a rotating red light on their head so that the poor policemen, who are blinded by violence, don’t get “confused” and give them a good thrashing. But it can be even worse if you are not from the press.

And the fact is that journalists, especially graphic journalists, are always in the way, “only showing the ugly”, as the right-wing extremist groups will later get fed up of repeating in their favourite police forums.

They can beat up, push and shove and tear down or gas. Or all at the same time. All they need now is a taser. So many forms of gratuitous police violence have become normalised that we have reached the point of no return in which the justice system lets police attacks on journalists go unpunished, even though they are considered proven. You can read one of those stories here.

I’m not going to come and tell you anything new, or anything that you can’t verify or haven’t seen for yourselves. The “mordaza” law finished putting the missing ingredient to the perfect recipe that justifies the swings in the performances.

You can read sad accounts by areas and dates. Even if you are very interested in the subject, you can find the testimonies from the mouths of the assaulted journalists duly documented with the videos and photographs of the aggressions.This is just one more hole through which our unquestionable democracy is leaking.