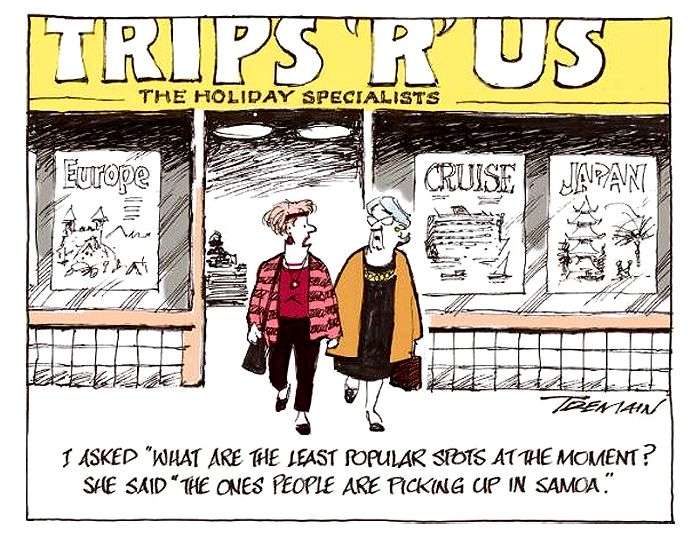 In the scene, two women leave a travel agency and one comments:

“‘I asked her what are the least popular spots at the moment?’ She said: ‘The ones people are catching in Samoa.

The pun is in the use of the word “spot”, which can be translated as either place, spot, spot, spot or spot.

Some New Zealanders, as well as Samoans, didn’t take the joke very well.

Apologies on the street

On Twitter, some people rescued and published other cartoons by the author accusing the newspaper of propagating racist messages and called for the only valid response to be the cartoonist fired.

But the actions went further, as about 40 people gathered to protest outside the newspaper’s gates on Stuart St in central Dunedin. The editor came out and apologised to the protesters and media gathered there. 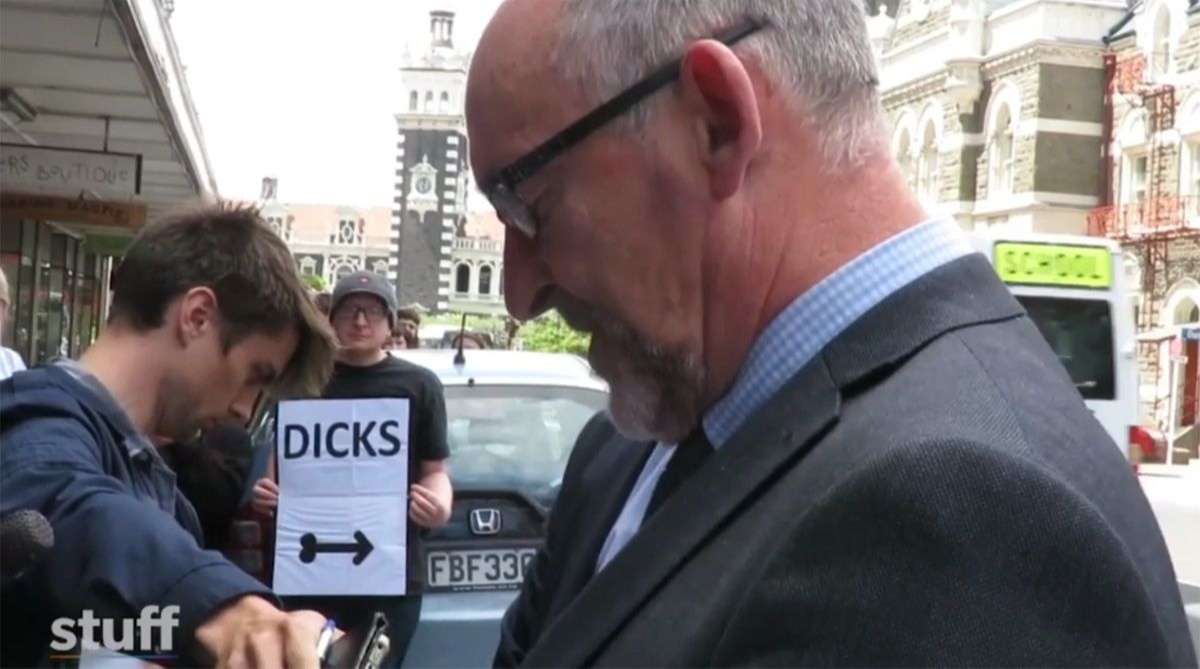 Otago Daily Times editor Barry Stewart addresses the protesters outside the newspaper’s office and reads an apology. In the background, a protester gives him an affectionate adjective. Video on Stuff.

The newspaper also published the apology in these terms: 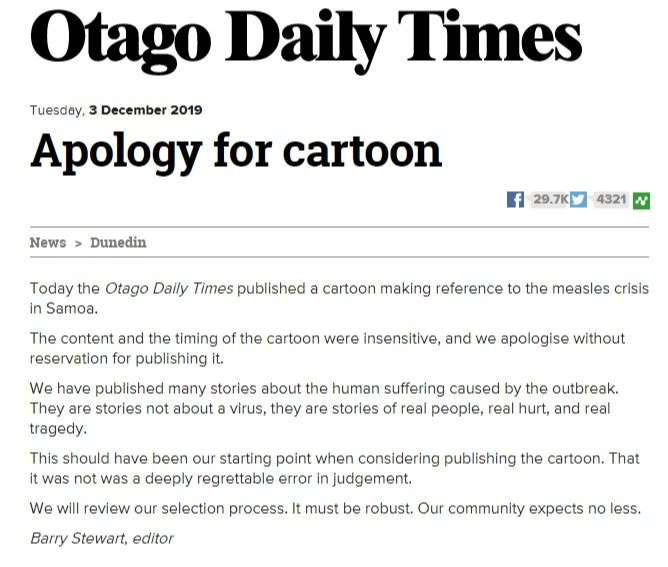 Today, the Otago Daily Times published a cartoon referring to the measles crisis in Samoa.
The content and timing of the cartoon were insensitive, and we apologise unreservedly for publishing it.

We have published many stories about the human suffering caused by the outbreak. These are not stories about a virus, they are stories of real people, real injuries and real tragedies.

This should have been our starting point in considering publication of the cartoon. It was a deeply regrettable error of judgement.

We will review our selection process. It must be robust. Our community expects no less.

The cartoonist, at first, did not react in the same way. He defended his cartoon as “a simple, harmless joke” and said he was not going to apologise “to the entire Samoan nation”, adding wryly:

“I’ve had people calling me asking for an apology and telling me I have no right to make cartoons or mention Samoa at this time, so that rules out the apology because I could hardly do that without mentioning Samoa.”

Finally, he acknowledged a “lack of judgement” and decided to post an apology to “those offended” in his own handwriting on his website:

In a interview with RNZ, Garrick said he had heard complaints from several Samoans and was sorry he had upset them.

In this politically correct atmosphere in which we are suffocating, we must bear in mind that there are an increasing number of people who wake up in the morning and their first intention is to find something to take offence at. This is something we did not have to deal with in the past as we do now.

The cartoonist is now “suspended”. The Otago Daily Time will not be publishing any more Garrick Trermain cartoons for the time being. I don’t know what exactly this “suspension” means, from the way they refer to it it seems to be a temporary measure while they decide what to do with the cartoonist. Be that as it may, in Samoa, the last thing they should be worried about right now is a cartoon.

Measles in Samoa, a serious matter

A measles epidemic has been raging in Samoa since October. According to facts according to the government’s 4 December report, 4,052 cases have been reported since the start of the outbreak, 171 in the last 24 hours. To date, 62 measles-related deaths have been confirmed, the vast majority of them children.

The situation is such that Samoa’s prime minister, Tuilaepa Sailele Malielegaoi, has taken emergency measures and ordered the closure of all public services and non-essential businesses to try to put an end to the epidemic as soon as possible.

And while battling the deadly measles outbreak, they have arrested a prominent (sic) local anti-vaccine activist.

Edwin Tamasese was arrested on Thursday 5 November and charged with incitement against government vaccination orders. He faces a possible jail term of up to two years.